Back to Bogalusa (Blue Thumb) 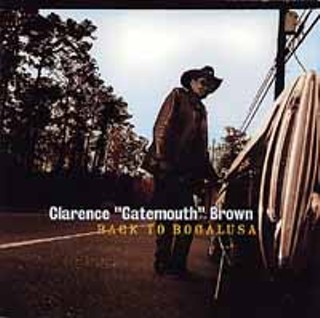 Back to Bogalusa (Blue Thumb)

There's no doubt Clarence "Gatemouth" Brown is a living legend. That he's still making music at the age of 77, touring the world, and releasing albums is in itself admirable. Unfortunately, his latest release Back to Bogalusa finds him slipping. His last outing, American Music, Texas Style, focused musically on the Lone Star State, and since Brown is Louisiana-born and Texas-bred, for his latest release, he's decided to cross state lines and honor the music of the Bayou State. Back to Bogalusa covers tunes by one of Louisiana's greatest songsmiths, Bobby Charles, with Brown joined by two of Cajun country's finest musicians, slide guitarist Sonny Landreth and accordion king Zachary Richard, for some interesting moments. That said, Bogalusa suffers through one clichéd arrangement after another, Brown's craggy voice is mismatched on so many selections that it's almost painful to endure. Most of this material is soul-based and horn-slick, requiring a croon that Brown just doesn't possess. Attempting Little Feat's "Dixie Chicken," which might be a natural fit, he's undone by a groove that's flat when it should be funky. Elsewhere, he's joined by background singers that lack soul and seem out of place most of the time. There are two instrumentals on Back to Bogalusa, "Grape Jelly" and "Slap It," both slinky workouts that demonstrate Brown still possesses superb chops as a musician. But in the end, while Brown has made great music in his time, this is one he might want to forget.