The Live Music Capital threatens another stake in the heart of live local music. 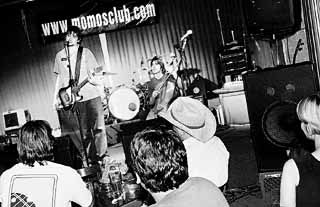 I've referred you to our Politics pages before, but never in a case where I expected you to come back more furious. For those too lazy to turn to "Naked City" for the full story, the news boils down to this: According to a memo from several municipal departments to City Manager Jesus Garza, the city has begun a plan that will likely result in the permanent cessation of musical events at Auditorium Shores as part of the renovation of Palmer Auditorium into a performing arts hall. The policy originated thanks to construction currently ongoing in the area, but the suspicion is that redesigns to the Shores area will ensure the events never return. Luis Zapata of Roadstar productions says their KLBJ Shore Thing, featuring the Black Crowes, Spacehog, Blues Traveler, Tesla, Joan Jett & the Blackhearts, and Monterrey, Mexico's Zurdok will happen Sept. 16, while their T-Bird-less revival of the Riverfest will also be held at the Shores this year, but that may be it for the location. It goes without saying that he's as miffed as anyone with the idea of removing music from the Shores. "We have to figure out a way to make the city government understand that there are not many cities in the world with a unique natural concert area like Auditorium Shores," he exclaims, "especially if you consider that the parking lot across from the Shores will be ready November 1, 2001." Zapata makes the point that if the argument to close the shores for live music is merely a matter of parking problems, then we might as well close all of downtown, because after all, you're damn lucky to find parking there at any time. "Plus, this city was built around music," he concludes, "and it was built around the shores."

It may not be the true end of ABCDs, but for now at least, it's the end of the record mart's First Thursday in-stores, as it prepares to change ownership (reported here previously). As a closure of sorts, the store will be presenting music by its employees at this final "monthly celebration of Austin music, carbonated intoxicants, and free shit," with staffer Charlie Burton & the Texas Twelve-Steppers starting things off at 7pm, manager Karl Pallmeyer's Nairobi Trio following at 8pm, and part-owner Randy Anthony finishing up with a set at 9pm. Most employees are reportedly sticking with the new owners, who also run the local CD Warehouse franchise and who have committed to having live music at the store, but Charlie Burton is outta here, planning to either return to his home state of Nebraska or perhaps become a travelling minstrel after the in-store and his Saxon Pub gig with Ian McLagan the following night (see "Music Listings"). "I've played with some great musicians here, and I wouldn't trade it for anything," Burton says, then adds, grumbling, "Well, I'd trade it for an audience!"

Meanwhile, rumors that the Tower Records on the Drag would be closing soon seem to be unfounded. An employee who wished not to be identified said that while he shouldn't comment on the matter, "nothing has been indicated" to the store's staff that would lead them to believe their jobs might be in danger. More to the point, the staffer notes that a new general manager was brought in this week to replace the store's departing GM Tony Jones and record sales manager Dennis Elinski (a popular character whose name can be found in the "thank you" section of a number of local albums). The logic goes that if closure was imminent, the corporate powers would have simply promoted an existing employee to avoid putting in unnecessary effort toward running a soon-to-be-nonexistent store. New general manager Leanna Lapore says that she believes the rumors most likely stem from comments about the viability of the overall Tower chain that were "misinterpreted and printed" in the national media earlier this year.

Singing for Your Supper

You've probably noticed at least one of the eight Schlotzsky's television ads featuring Austin musicians that have been running in the past month, but you might not have caught on to the fact that the ads aren't just being shown in the local area. The TV spots have been running nationally and feature local songwriters and performers who created 15-second "mini-songs" at Austin's Tequila Mockingbird Studio. The tunes range from a WWII-sounding number by TM's Wally Williams and sung by ex-Barkers singer Alice Spencer with former Asleep at the Wheel keyboardist Danny Levin and Tequila regular Jon Blondell on horn and bass, to a mock-techno tune by Ben McDonald of the Real Heroes. Others seen and heard in the spots include San Marcos-based Fluffers Union, 14-year-old singer-songwriter Cole Williams, Ray Von Foster with Derek O'Brien, and horn player John Mills. The campaign began June 25 and ended its run last week -- and was apparently considered a success since a new set of four ads will launch in October. Schlotzsky's president and CEO John Wooley "has always been supportive of what makes Austin Austin," says VP for brand management Karen Lee, to which Williams adds that the company had been trying to get away from the "jingle" type music typical to most commercials. Though Williams created one of the new songs for the October-November ads, the big spotlight will be on Darin Murphy, who wrote and performs the other three with some help from Blondell, Spencer, Levin, and engineer Kyle Crusham.

Mark Addison's India Records is moving along just fine, says Addison, despite the discontinuing of the label's weekly showcases at Momo's. Labelmates Dewato, Jeff Klein, Will Sexton, and Kitty Gordon played those gigs together and even toured as a group, but now only Klein plays the Tuesday night slots. "It was a cool idea, it gave the bands a chance to try out new members and new songs," Addison says, "but none of these bands is making popularity in Austin their first priority." With bigger fish to fry, the label is looking at licensing its material to larger labels, though Addison says he can't comment on rumors that Kitty Gordon's album is close to coming out on Miles Copeland's Ark 21 imprint. From India itself, look for the new disc out now from God Drives a Galaxy, next month's Charlie Sexton-produced live Michael Fracasso LP Back To Oklahoma, and an upcoming Goudie album in the works. There's also an October tour planned, but it definitely won't include everyone on the label this time!

The Adventures of... are releasing three new CDs before the end of summer, all of which include guest appearances by their pal Syd Straw, who has a gig of her own at the Cactus Cafe on Aug. 16. Two of the discs are from a live show recorded back in January of this year -- one focuses on Straw's songs, the other on the band's -- and the third is a new studio album… Darcie Deaville's "original one-woman musical," Tornado in Slo Mo, opens this Friday at the Hyde Park Theatre. Described as "a journey through her life that has led her to become the musician she is today," Deaville will be accompanied only by her voice, a couple of guitars, and a fiddle, telling her story through the music from her 1999 album of the same name… Look for a couple of big, nonlocal names at two upcoming benefits, with Iris Dement appearing on behalf of Sarah Elizabeth Campbell Aug.12, and Henry Rollins doing a gig Aug. 24 to help Roky Erickson, both at La Zona Rosa and both to aid the respective artists with their medical bills… Hmmm. Did you know that Madonna's current touring guitarist, Monte Pittman, used to play in Jason Craig's old band Myra Manes ("For like two weeks," says Craig)? Entertainment Weekly also tells us that Pittman recently taught Ms. Ciccione to play the guitar, while Craig tells me that his current band Pong (not to be confused with another old band Pittman was in, Prong) will release their long-awaited debut album on Aug. 25… "My boys are going all the way!" declares Hollywood Records' Sharrin Summers, now that early radio interest is pretty much guaranteeing that the Butthole Surfers' new single "The Shame of Life" is going to be a sizable hit. Paul Leary should be experiencing double happiness, in fact, since not only was "Shame" last week's No. 2 most added song on alternative radio according to the industry mag R&R (Radio & Records), but the song his band edged out at No. 3 is the new one from the Long Beach Dub All Stars, which was produced by -- you guessed it -- Paul Leary! Coming soon, the video for "Shame of Life," by first-time director and title sequence king Kyle Cooper (some 80 movies, from Seven to Richie Rich), plus a Weird Revolution video game, in which you use your jet fighter to blow up little babies, or collect baby bottles and gain "smart poops" which blow up the Jet Fighters. Intriguing, in a Gibby Haynes sort of way… Summers' other boys, Fastball, have a new song, "Everytime She Walks," on the soundtrack to the new movie Summer Catch, and Miles Zuniga and Tony Scalzo are now writing songs together for the first time (they always wanted to be the Beatles). Fastball returns to the studio before the end of the year… Finally, an e-mail from Peter Emery of Ten Speed, sent from "the 13th floor of a luxury condominium building deep in the heart of Brazil" attempts to dispel a number of rumors (which I'd never run across before the e-mail itself!) about the band. Sadly, the e-mail is far too long to reprint here, but to address a few points within it: The band has not broken up and will play a free gig Aug. 9 at the Cactus to prove it; their van was formerly owned by Kelly Willis and for a 50-cent admission price you can see the bunk in the back where they claim Kelly and husband Bruce Robison conceived their new baby (ewww!); the new Ten Speed album will be ready in September; Chopper from Kissinger supposedly paid for the Brazilian trip in return for an alligator skin speedo; and Ten Speed drummer Swanson, formerly of the Cool Hand Band, claims to have recently done an intimate photo session with Hole in the Wall co-owner Debbie Rombach "showing the off and on couple in various stages of undress." (Didn't Debbie say something to me the other day about how her name never comes up in this column? Bad timing, Debbie!)… Well, now I gotta go prepare myself for the lip-synching contest I promised to help judge on Thursday at Highland Mall, wherein shameless parents attempt to "perform" N'SYNC songs in order to win tickets for their offspring to the band's Alamodome show on Sunday. What was I thinking when I agreed to this?…