Tweet
print
write a letter
Edna Gundersen of USA Today asked what I thought about the 20th anniversary of MTV. I am free, bright, and 51, so I hadn't thought about it at all. But my newspaper roots kicked in, and there I was at 7am, putting together about five times as much as Edna could conceivably use. In the middle of the afternoon, I saw the 20th anniversary story on the cover of Entertainment Weekly and rapidly concluded that if the dummies were gonna speak up, I should too.

So here is what I told her, slightly altered: Of course, I never watched much MTV, even back when it still showed music videos most of the time, because I'd already reached puberty when it started. So I guess I'm not really an expert, even though my children were adolescents in its early days, so I was certainly exposed to a lot of it.

And this is what I came to understand: MTV is evil. Its effects are evil, too. Veejays are evil. Reality TV is blatantly evil, as well as having about as much to do with "the real world" as Penthouse centerfolds. Jenny McCarthy was evil and so are the game shows. We will all rot in the pits of hell five minutes for every second we've wasted watching MTV, and there are no seconds watching MTV after the first two minutes that are not wasted. I believe this with all my heart and what's left of my mind.

In rock & roll, the main effects of MTV were to destroy the concept of the live rock band and the hope of a long career. The money that used to go for tour support, which exposed bands to thousands, has been diverted to making videos, most of which are never seen.

The idea of career development has been tossed out; now we have quick hits and quicker burnouts. (When's the last time you heard of a hit act that lasted all the way to its fourth album?)

Heard from the Wahlberg brothers, let alone New Kids on the Block, on record lately? And that's MTV's biggest success story, give or take Jenny McCarthy, which it would take MTV, not me, to brag about.

There is the indisputable fact that MTV played a huge role in creating a wide audience for hip-hop, once it got rid of Robert Pittman, the redneck chief executive who maintained it had to be segregated to succeed, because white kids didn't like to look at black people or hear their music. He believed this so deeply that he had to be coerced into playing Michael Jackson's Thriller videos.

Pittman has failed upward ever since, to the point that he now runs Time Warner, where he refuses to believe that it is a crime against both journalism and humanity to produce Entertainment Weekly and People.

But it cannot be denied that MTV eventually made the world safer for B-Boys. As rock writhes from video poisoning, let's give thanks it left the world with something substantial, even though it was against its will. 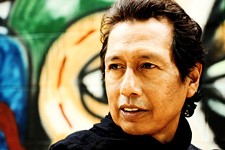