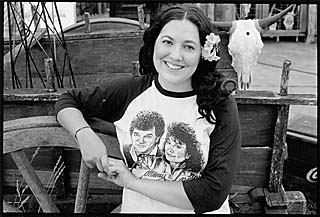 Make no mistake, though, even among such rarefied country company, Poston's the real star, mixing her love- and heartbreak-laden originals with choice covers from the likes of Lynn Anderson, Conway Twitty, and Loretta Lynn. You say you've never heard of Karen Poston? Well, if you're an Austin music fan, surely you've at least heard one of her songs. Say, for example, "Lydia," the tale of a widowed woman who's lost two of her loved ones in the Virginia coal mine. It was one of many highlights on Slaid Cleaves' 2000 breakout, Broke Down.

"I like sad songs," says Cleaves. "I just love the way that song is crafted, the way the story is revealed so subtly. You really have to listen to it to understand what's going on. I love a song like that because you can sing it hundreds of times and not get tired of it. I think that's the hallmark of a really great song. I don't know if I've written a really great song yet, but Karen has."

Born in Dayton, Ohio, Poston and her family moved to the rural community of Tipp City, between Dayton and Columbus, when she was 5 years old. Raised on a farm, with horses, livestock, and a huge garden, she describes her childhood as "idealistic." Her earliest memory of singing in public was the day her father put her on the hood of his Buick Electra and made her perform a Faron Young song and then Tanya Tucker's "Delta Dawn" for the neighbors.

Tall and gangly in high school (a self-described "freak"), Poston didn't really fit in, but it wasn't until college that she started writing songs. Studying theatre at Ohio's Wright State, she teamed up with Kelly Morris in a folk duo, performing songs by the Everly Brothers and Louvin Brothers. This collaboration led to the formation of Aunt Beanie's First Prize Beets in the early Nineties.

A jug band of sorts, compared favorably to the Jim Kweskin Jug Band and Dan Hicks & His Hot Licks, Aunt Beanie's was fairly successful around western Ohio. Their combination of bluegrass, blues, and country played to favorable reviews and packed houses. They opened for many of the touring folk, like Jimmie Dale Gilmore, Mary Chapin Carpenter, and the pre-Natalie Dixie Chicks.

"We were the big fish in a little pond, so to speak," explains Poston. "We had enough success there, but everyone we'd grown to love, Townes Van Zandt, Nanci Griffith, and Willie Nelson, were here, so we moved sight unseen."

Looking back with a sense of amazement, she adds with a laugh, "We just packed it up one day and came to Austin."

Aunt Beanie's arrived in the Capital City in late 1994 and landed on their feet. Folks like Marvin Dykhuis and Paul Pearcy from Tish Hinojosa's band, and Sarah Elizabeth Campbell, whom they'd met in Ohio, set them up with gigs at Artz Rib House. Poston started working at Waterloo Ice House, which led to gigs there, and they also played the Cactus Cafe frequently. After a year or so, the band split up.

"We all had different ideas about what we should be doing," recalls Poston. "But I'm still in touch with most of the people in that band. They all still live here."

Poston eventually became friends with Dale Watson and Charlie Robison, joining them on occasion for a song or two at their gigs. Watson even featured Poston on his 1996 Hightone highlight, Blessed or Damned. Later that same year, she was invited to try out with Ted Roddy, who was looking for a backup singer for his newly formed Tearjoint Troubadors. Five years later, she's still with the band.

Although Poston figures prominently in the Troubadors -- especially on their many he-said-she-said songs -- and Roddy lets her fly solo for a song or two nearly every set, she naturally wanted to put together her own band. For the first of her many contacts, she approached Dale Watson's then-drummer Terry Kirkendall.

"Dale was playing the Black Cat one night," Poston relates, "and Terry was the drummer. They did a blistering version of 'Nashville Rash' and I was blown away. I'd never heard a drummer like that, I'd never heard a singer like that, and I said to myself, 'That's what I want to do.' I met Terry that night and when I tried to put a band together, Terry was the first person I talked to. Thankfully, he was into it."

Also into it was Western swing funnyman Cornell Hurd, who introduced her to his straight man/steel-guitar whiz Bobby Snell.

"Bobby's played with Cornell and Charlie Robison, and I'm so honored that he plays with me now," smiles Poston. She has similar praise for Real Bad producer Jim Stringer, whom she met through Roddy.

"Jim Stringer has been the single most supportive person that I've met in Austin," gushes Poston. "He started playing with Ted, and we got to be friends. We work great together. We used the people that I wanted to use on the record, and he was open to my ideas on what I wanted the record to sound like."

As she's developed relationships with artists from all corners of the local roots music community, Poston marvels at the support and encouragement she's received along the way. As far as names go, they don't get much bigger inside Austin twang circles than Kelly Willis and Gurf Morlix; both appear on Real Bad -- Morlix on acoustic guitar and Willis lending backup vocals to "Lydia" and the title track.

"Karen's a really interesting songwriter," Willis says. "She can write diverse types of songs, but ones that still have that connection to some type of roots style. To go from "Real Bad," a kind of a honky-tonk song, to "Lydia," which is a story-song that's really sad and morose, that's something I admire and would like to be able to do."

As for Morlix, who occasionally sits in with the Crystal Pistols, Poston met him while he was producing Cleaves' CD and quickly found yet another kindred spirit.

"I'm in awe of Gurf," she declares. "If I only made one record, I wanted it to represent what I like about this genre and the people that are playing in it. I just asked him, and he came and did it.

"There was one moment of being onstage with Terry and Snell and Gurf," she remembers with a laugh, "and saying to myself, 'Hey I'm at the Little Longhorn, but this is it. Where do I go from here? I'm surrounded by people that love me and treat me nice and have from day one. Those are the people that I respect. What more is there?"