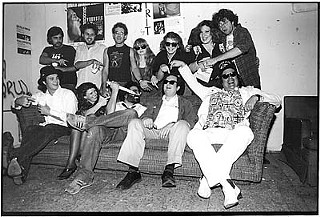 Three weeks ago, I was reminiscing about Sara Clark, an editor at the Austin Sun in the Seventies, who died recently. In her passing, I discovered she represented a great deal in my life. It was the same wistful revelation that occurred when Louis Black called me Sunday afternoon to say that Jeff Whittington had died of cancer. Now those were words to pierce the heart.

Friend, role model, co-worker, lover, to say Jeff Whittington changed my life is insufficient. On a hot summer day 20 years ago, he sipped a Dr Pepper and said casually, "By the way, Nick and Louis are starting a newspaper. I'm going to be the music editor, and I want you to write the gossip column." That, without brass bands or embellishment, is how I began at the Chronicle.

It was Jeff's influence as a Daily Texan columnist that had sent me back into the Velvet Underground in the late Seventies, and the way he talked about John Cale, Iggy Pop, and Patti Smith were as revelatory as any hallucinogens I'd ever taken. We'd lie around his room at the Ark Co-op and ramble for hours about the importance of what we were listening to and why it mattered that we even listened. Ever the philosophy student, Jeff could give you 10 reasons off the top of his head why the Shaggs really mattered, and by God, I believed it even if I couldn't stomach the Shaggs. He was erudite and impassioned, and I was positive he would be the shining star of the next generation of critics.

Jeff had a sweetness and an innocence, like the character William Miller in Almost Famous. It was partly naiveté and partly the insulation that very bright people sometimes build around themselves to avoid harsh reality. When Tom Huckabee cast him as Jim Morrison in his late-Seventies student film, The Death of Jim Morrison, I knew why immediately. Whittington's angelic face and full lips and long curly hair were very Lizard King, though he was hardly the saturnine. Well over a decade ago, he walked away from writing and rock criticism, moved away from Texas, and went to New York where we kept up occasionally by e-mail.

It's not like I can't imagine life without Jeff. He hadn't been a part of my world for about 15 years. What I can't imagine is what I would be like if he had never come along to bend my way of thinking about music. I wish I could find a better way to pay tribute to him, for that it's times like these when words seem cheap and insignificant. Think I'll buy a Dr Pepper and play Iggy Pop loud tonight.