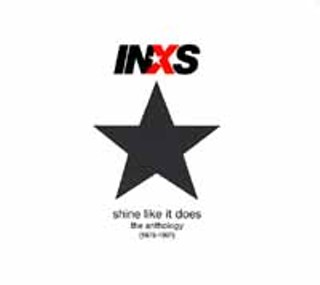 In 1988, INXS frontman Michael Hutchence observed in Rolling Stone that INXS, U2, and R.E.M. were the only true bands capable of cracking the Top 40. Unfortunately, the Seattle-spawned tide of self-loathing was just around the corner, and this shift in musical tastes was apparently no deterrent from Hutchence heading down the road to rock-star ruin that culminated in his 1997 suicide in a Sydney hotel room. INXS were then rehearsing for a 20th-anniversary Australian tour, so this 2-CD collection -- dedicated, naturally, to Hutchence -- brings closure to the singer's abrupt passing and makes a convincing case for this Australian sextet as one of the elite groups of its generation. From the beginning, INXS' sound was both infectious and hard to pin down; their early work veers from the "Pretty Vacant" punk of "We Are the Vegetables" and Devo-derived robotics of "Just Keep Walking" to the disco flip of "Stay Young" and synthy dioramas of "Don't Change." Their groove (thank drummer Jon Farris) impressed Nile Rodgers, who produced their 1984 hit "Original Sin," a plea for racial harmony, and by 1985's Listen Like Thieves, the exuberance of "What You Need" put them over in the States once and for all. Outshining both as the highlight of disc one is "Good Times," a positively giddy duet between Hutchence and Jimmy Barnes of Down Under legends Cold Chisel that was the best thing about the teen vampire flick The Lost Boys. Disc two begins with the salad days of 1987's Kick -- "Need You Tonight," "Devil Inside," "Never Tear Us Apart," and so forth -- before revisiting Andrew Farriss' raunchy harp breaks on "Suicide Blonde" and Hutchence's blissful croon of "Disappear." Here, effectively, is where the hits stopped coming, but in no way did INXS' later years represent any kind of creative drought. "Heaven Sent" and "The Gift" both crackle with the feisty guitars of Tim Farriss and Kirk Pengilly, while Garry Gary Beers' elastic bassline on "Not Enough Time" will bounce around your cranium for days. Pengilly adds some savory sax to "Taste It," and no less than Ray Charles pops up to duet on the driving "Please (You Got That …)." Shine Like It Does, bolstered by a typically erudite essay from Rolling Stone's David Fricke and revealing song-by-song annotations by Andrew Farriss, draws to a close with a suite from '97's Elegantly Wasted, which demonstrates that the band had lost none of its snap and hints that the saga of INXS had plenty of chapters left. This excellent anthology seals off their first two decades as a band that may have just missed the brass ring, but has little to apologize for. Except, perhaps, for those mid-Eighties haircuts. Yow.