Another Side of This Life, The Lost Recordings 1965-1966, and Sacred Hearts & Fallen Angels - The Gram Parsons Anthology (Sundazed) 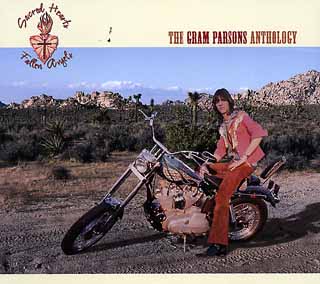 There's been a ruckus in the alt.country community caused by the release of Sacred Hearts & Fallen Angels, a 2-CD set that serves as an overview to the work of Gram Parsons. To most folks, Parsons is the grandfather of country rock, though in fact he was just one, and probably not the most important one, of a small group of Southern California rockers who merged the two musical forms in the late Sixties and early Seventies. Others have raised the notion that Parsons was limited in talent, a self-absorbed folkie singer-songwriter of the Jackson Browne variety and hardly worthy of the deification he's engendered. No matter where one stands in the debate, from the vantage point of 30 years on, Parsons' music has been tremendously influential since his untimely death in 1973, and Sacred Hearts & Fallen Angels lays out all the reasons why. Rhino has done a fine job collecting Parsons' best songs and performances from the time he first came to most people's attention with the International Submarine Band and his brief stint with the Byrds to his continuing work with Chris Hillman in the Flying Burrito Brothers and his later solo work with Emmylou Harris. The main point to be gleaned here is that Parsons made it acceptable for rock & rollers to listen to country music; his work is the link between Buck Owens, George Jones, the Rolling Stones, and alas, the Eagles. Whether he's a musical genius or a hack is strictly up to one's personal taste, but it sure is nice to have all the evidence in one place. That said, a strong argument for Parsons as a self-centered singer-songwriter can be made from the music on Another Side of This Life. It's just Parsons and an acoustic guitar on 18 previously unreleased demo recordings made from March 1965 to April 1966 on a reel-to-reel machine. The sound qualities of these recordings are remarkably crisp and clear, yet his vocals don't possess the deeper timbre found in his later recordings and therefore it lacks the soulful flavor that some find attractive in that work. The country leanings he later explored are also absent; instead he covers songs from the likes of Tom Paxton, Fred Neil, Tim Hardin, and the Rev. Gary Davis in between his own compositions, none of which are particularly memorable. His song choice reflects the fact that during this period of his life, Parsons was attempting to be part of the folk scene in New York's Greenwich Village and that he was taking his cue from like-minded artists who inhabited the scene.

(Another Side of This Life)

Another Side of This Life, Sacred Hearts & Fallen Angels -- The Gram Parsons Anthology