Nuggets II: Original Artyfacts from the British Empire & Beyond (Rhino) 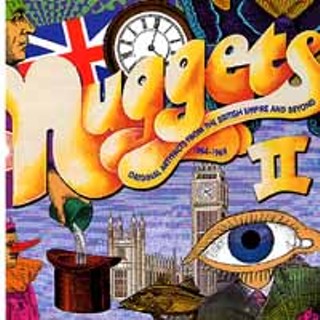 What hath Lenny Kaye wrought? In 1972, the critic/musician released Nuggets, a watershed 2-LP collection of Sixties psychedelic treasures that brought garage-rock aficionados crawling out of their dusty closets in true Dawn of the Dead fashion. His compilation spawned countless offspring (Pebbles, Rubble), and when it was finally re-released in 1998 as a 4-CD box set, it sold all over again. For its sequel, the focus turns overseas for more or less the same time frame, and there are few known commodities among these 109 gems. While rock & roll did begin in the U.S., the Fab Four making popularity soar and clearing the way for the ensuing British invasion, it's virtually impossible to claim bragging rights for either country; many U.S. rockers aped British mod bands covering American R&B tunes. And while 80% of this collection comes from the UK and its divergent scenes, there are also noteworthy contributions from outposts like Peru and Sweden. Collectors worshiped garage rock because of its scarcity and fevered passion, a pure spirit punk rock would later strive to reclaim. Precious few of its practitioners charted, and because of this, it's likely even the most diehard fans will find something new to treasure here. Known rockers like Australia's Easybeats, UK's Troggs, Pretty Things, Small Faces, and the Action coexist among countless obscure delights, some of them early contributions from such future UK superstars as David Bowie, Jeff Lynne, Dave Edmunds, Marc Bolan, and Ron Wood. London's the Creation kicks off the set with "Making Time," a furious, proto-Who guitar classic, and things only get better. There's future Strawb Dave Lambert's band Fire, the Eye's "When the Night Falls," the Sorrows' "Take a Heart," the Move's "I Can Hear the Grass Grow," turns by the Thoughts, Spain's Los Bravos, Canada's the Haunted; all incendiary and gripping records, all before you even reach the end of the first disc. As with the previous Nuggets, pleasures diminish slightly as bands invariably reappear, but it hardly matters. This is the type of heartfelt endeavor that only record geeks of the first order could assemble, and it's a safe bet every one of these tracks was fought over for inclusion. Why spend $60 for a four-volume set of obscurities? If rock & roll matters to you, don't ponder the question for even a second.