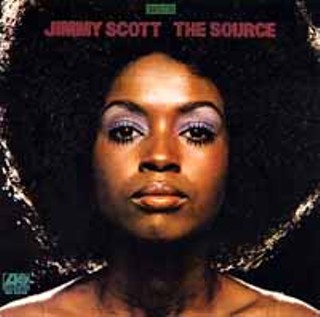 Sublime: "Lofty, grand, or exalted in thought, expression, or manner. Of outstanding spiritual, intellectual, or moral worth. Tending to inspire, usually because of elevated quality (as of beauty, nobility, or grandeur) or transcendent excellence." Sublime: The Source. Thirty-six minutes of pure, absolute transcendence.

No doubt it's the defiant black beauty on the original LP's cover, her glorious afro halo back-lit over bare shoulders, but when Jimmy Scott's tortured ache of voice -- that wounded cry -- bleeds the first words of "Exodus" on the album's opening lament, a millennia worth of oppression wells up in the listener like the guilt of mankind. "This ... land ... is miiiiiiine," wavers Scott's prophet's wail. "God gave this land to me." Suddenly the dispossession of an entire race becomes the very nature of life itself.

"No, babe," replies Jimmy Scott when asked if 1969's The Source was a nod to the civil rights movement of that decade. "It was just emotions. Choice of expression."

What about "Our Day Will Come" and "Sometimes I Feel Like a Motherless Child" -- the painful yearning of nearly every word on and phrase of The Source? Surely, it was part and parcel of the Sixties' idealism and advocacy. Its strident militantism and demonstration.

"I wish it would have come out in that sense," sighs Scott.

Problem is, it didn't. As soon as the album hit the shelves, it was yanked. It was only out if you happened to be in the record store that day.

Until now. "Exodus," a divine reading of "On Broadway," "Our Day Will Come," "Unchained Melody," "Day by Day"-- The Source is one of the great testaments to balladry, equal or better to, say, John Coltrane and Johnny Hartman, or any number of classic Billie Holiday sides. One for the ages. In the vaults for more than 30 years. 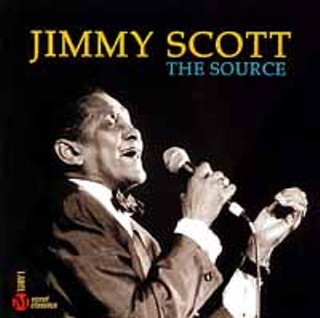 "It was recalled like the Ray Charles one was," explains Dorn, whose Label M has reissued The Source. "Even though Jimmy assured us that he was not under contract to Savoy anymore -- that's why the Ray Charles album had been pulled -- Savoy came out of the woodwork, showed us papers, and the Atlantic lawyers didn't want to fight it. So, it was taken off the market until I put it out a couple months ago."

Such has been the tragic (until now) tale of Jimmy Scott. Born in Cleveland in 1925, Scott inherited Kallmann's Syndrome, a hormonal disorder in which the victim's sex organs never mature. His voice, an ethereal, preternatural soprano, has been mistaken for a woman's his entire career. A career that began not long after Scott, 14, and his nine brothers and sisters became wards of the state when their mother was killed in an automobile accident. By the late Forties, Cleveland's motherless child was living in Harlem and fronting Lionel Hampton's Orchestra. Shortly thereafter, "Everybody Is Somebody's Fool" became an R&B hit and Scott's voice hailed as a natural wonder.

In the mid-Fifties, the singer signed a long-term contract with Savoy Records, the results of which can be heard on 1999's 3-CD collection, Little Jimmy Scott, The Savoy Years and More... . Widely uneven, Scott emotes his 4-foot-11-inch heart and soul out only to be undercut by many truly grating, sometimes harrowing pop/jazz arrangements. Worse still, label owner Herman Lubinsky made Scott a virtual indentured slave, binding him to a contract the singer now claims never existed. When Scott recorded Falling in Love Is Wonderful with and for Ray Charles' fledgling Tangerine imprint in 1963, the LP was heralded as the singer's breakthrough before being recalled by Lubinsky's lawyers. Six years later, a similar scenario happened when The Source came out on Atlantic Records. Its recorded follow-up, cut in 1972 again with Dorn, never saw the light of day.

Demoralized, "disgusted," trusting no one in the music business, Scott returned to Cleveland after one final LP for Savoy in 1975, and began work as a hotel shipping clerk. Recording intermittently with King Records, he was, for all intents and purpose, retired. In 1991, at storied songwriter Doc Pomus' funeral, punk/New Wave guru and Sire Records CEO Seymour Stein witnessed Scott croon "Someone to Watch Over Me" accompanied by Dr. John on the piano, and coaxed the spritely singer back into his vocation. The ensuing discs, 1992's All the Way, '94's Dream, and '96's Heaven, found Scott's interpretive gifts undiminished and introduced him to a new strata of admirers, among them Lou Reed, Bruce Springsteen, and Madonna. This year and last, the 76-year-old's resurgence resulted in a pair of lovely supper club LPs for Berkeley's Milestone label, Mood Indigo and this spring's Over the Rainbow.

Today, Scott spends much of his time out on the road and in Europe. His debut at the New Orleans Jazz & Heritage Festival in April found the elfin singer mesmerizing a packed jazz tent with a set of lugubrious standards such as "All of Me," "Sweet Embraceable You," and "When Did You Leave Heaven." Both Dorn and his boss at Atlantic, Jerry Wexler, say Scott no longer exhibits the unmatched vocal gifts of his youth, but then one would be hard-pressed to find a contemporary vocalist whose ability to turn timeless compositions inside out, wrench from them every ounce of feeling, matches Scott's. Ultimately, that's what makes The Source so priceless: It's Scott at the very pinnacle of his craft. Even Rhino's Lost & Found, which combines five tracks from The Source with five from its unreleased follow-up, pales in comparison. It's excellent, but The Source is perfect.

"If you ask me about The Source," says Dorn, who signed Scott to Atlantic as a 27-year-old staff producer, "I think it's valuable for two reasons. Number one, Jimmy's really singing. It has some of his greatest performances ever. More importantly, there are only three albums out there -- the Ray Charles record [available only as a hard-to-find Japanese import], The Source, and Lost & Found -- that you have Jimmy Scott recorded at the height of his powers. That's why these records are important."

"It was a marvelous record," says Wexler about The Source. "I'll tell you this, in those days Jimmy Scott was superb and peerless, always on the edge of disaster the way he held a note. You always held your breath to see where he'd end up. He was the greatest singer of slow tempos that ever lived."

"People who knew," reiterates Dorn, "knew he was the greatest ballad singer that ever lived. That's really where it was at."

So good, in fact, that Scott was often compared to the queen of balladry, Billie Holiday. 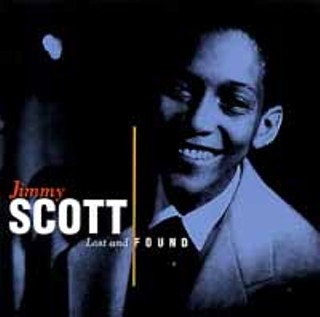 "I think it's the lateness in styling that has similarities," acknowledges Scott. "We chose to sing in a more expressive way, that's all. And our timing is a little different than the average, but it's based all on a positive rhythm."

That "lateness" of style, according to Dorn, gave The Source's session players some trouble at first. Considering they were all top-grade musicians like pianist Junior Mance, bassist Ron Carter, tenormen David "Fathead" Newman and Yusef Lateef (credited as Joe Gentle), and even Cissy Houston, this was no small feat.

"He's a very, very difficult person to play for if you don't really understand what he does," explains Dorn. "What you have to do is play as if you're playing for a regular singer, let him do what he wants. Especially on 'Day by Day,' which to me is one of the greatest vocal performances of all time, the first take or two, the guys were confused, because his version was so original, so slow, and so unique that they just kind of stumbled over it. And these guys aren't minor leaguers. These guys are Hall of Famers. Finally Jimmy said, 'Just play it the regular way. I'll meet you at the end.'"

They did, too. So much so that three decades later, the three-day session that produced The Source sounds like one glorious, all-encompassing note. One breath, one exhale, one source. The Source.

"I think I was in Switzerland when I found it had been released," recalls Scott. "It was encouraging. I think I got the same benefit then as now. I always felt that it was uplifting."

Were you surprised it had resurfaced?

"A bit. It's a funny thing, but you always hope for your work to come out. You always hope within yourself. I hope for it all to arrive somewhere, some way, and little by little it has."

Just like Jimmy Scott himself -- finally. After all these years.

"I saw him at Birdland a couple of weeks ago," says Dorn. "He doesn't have that voice that's on the records I made with him. He's past that part of his life. But people who never knew he had an unbelievable instrument are still truly moved by his presence and the wisdom he brings to what he sings. So you have to look at it in that context.

"If you saw him like I did, at the Apollo, or at nightclubs in Philly when I was a kid, you could say, 'Well, that's Jimmy Scott now, but you should have heard him back then,' but then that's not really fair to Jimmy. At this stage in his life, he's not depending on that unbelievable voice. He's depending on his ability to move you, and he does that brilliantly. Brilliantly."