The Gospel According to the Imperial Golden Crown Harmonizers 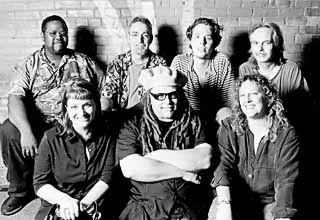 Even with a population that continues growing by the U-Haul, Austin is consistent. The folks of Central Texas can't get enough music, and they love the food. Places like Central Market, Jovita's, Threadgill's, and the Broken Spoke combine the two to great effect. The Empanada Parlour and the Imperial Golden Crown Harmonizers, however, take the combination to another level.

Every Sunday starting at noon, some of the best musicians in town gather for Sunday brunch at the Sixth Street eatery. The delicious offerings on the buffet table aside, the real attraction is the music: the pure and inspirational sounds of the Imperial Golden Crown Harmonizers. While their name might suggest otherwise, they aren't a long-running Eastside gospel institution. Even when they pass the "collection plate" and announce that every penny goes to a local charity, the spirit of giving is slightly less orthodox than that found in formal houses of worship.

Today, the Imperial Golden Crown Harmonizers are producer/guitarist Gurf Morlix, guitarist Malcolm "Papa Mali" Welbourne, bass player Sarah Brown, guitarist Scrappy Jud Newcomb, vocalist Martha Merriell, keyboard player Nick Connelly, and drummer Paul "Buddha" Mills. It's an assembly of talent with a pedigree that stretches from one side of the Austin music scene to the other and beyond. The idea for the group began with a conversation between Antone's Blue Monday bass player Larry Fulcher and Welbourne and Newcomb.

"I had been talking with Larry," remembers Welbourne, "who at the time was playing with me in the Killer Bees and was also playing a lot with various Antone's house bands. I mentioned to him that I had been interested in playing some gospel music. He said he had been talking to Scrappy about the same thing.

"The three of us then got together with Paul Mills. Malford Milligan had a little free time, so it started out it was just the five of us, all of us singing as well. We had only done a couple of gigs when Malford started getting real busy and Larry did too. So we recruited Sarah Brown to take Larry's place on bass. About that time, Gurf came in to sub for Sarah one time, and we ended up telling him to stick around."

Welbourne chuckles, trying to keep all the personnel straight.

"At some point Barry 'Frosty' Smith joined us on drums and Paul moved over to percussion."

The new group's first gigs were at the now-defunct Hank's Roadhouse on South Lamar. When Hank's closed down, they moved on to the patio at Flipnotics, where they performed on Sunday evenings. Flip's proved too small for the growing number of musicians in the band, so they took over the Continental Club for some evening shows. Soon after, they moved onto Shaggy's on South Congress for Sunday brunch, where they began to draw a regular crowd.

When Shaggy's closed its doors some two years later, the Empanada Parlour stepped in and gave the Harmonizers their current Sunday slot. That was last year. Since that time, the all-star cast has more or less solidified and continued to build its audience. According to Morlix, one of Austin's most in-demand producers and sidemen, the constant thread throughout all the venue jumping and member changes has been idea of making a charitable contribution back to the town they all love.

"Local charities get the money to people who need it right now," states the guitarist. "I don't know that anybody in the band is particularly religious, but for us it's really inspirational. I like good music, and good gospel music is really inspiring. It also feels really great to play for nothing and to give the money to charity.

"It's kinda like a little club that meets every Sunday afternoon, and we do it because we love doing it and it feels really good."

Welbourne claims the group has been able to raise $10,000 a year over the past few years.

"It was something we decided on doing early on, because all of us are in bands that have benefited from the community," states the Killer Bees founder. "We're all in bands that weren't getting rich, but we were all making a decent living at it. We thought since none of us are what you'd call holy rollers or real devout churchgoing people, we wanted to do something that was good for the community.

"We have a bank account, and every week we make a deposit, and we let it build up to several thousand dollars. A few months ago we gave away $6,000. The charities we like to give to are the ones that are helping people here in Central Texas and the ones that have the least amount of red tape -- the ones where we can see that the money is going to help the people that are living on the street.

"Caritas is one that we really like a lot. Capital Area Food Bank and the SIMS Foundation have always been great. There's House the Homeless and Habitat for Humanity, both of those help people locally. We really enjoy playing the music a lot, and we're really glad that we're able to give something back to the community, because the community has been pretty good to all of us."

In fact, all the Harmonizers stand united behind the group's charitable contributions. Playing in the group is great, but playing a role in the greater community is even better. Particularly when being a musician doesn't always allow for such.

"A musician can't afford to contribute to charity in any sizeable way," says Sarah Brown, "but the amount of money we've raised is really sizable over the years, and there would be no way I could make that kind of contribution otherwise. This is my church."

"Besides, it's cool to not have to divide up the money after the gig."

"Playing with that group of people and playing that particular music really is its own reward," he says. "With any money we make, it only makes sense to give it to somebody who could use it more than we could. "

The latest avenue the band has developed to continue raising money is through a self-titled CD released through Catamount Records, the Chicago-based indie label that also released Morlix's solo debut last year.

"We'd been trying to figure out a way to record the band," explains Morlix, "but with seven members, everybody's off doing their own things, and it was kind of problematic. So we went into Arlyn Studios one night, set up, and cut it live. Then I took the tapes home and spent a while mixing them. [The CD] was our performance for that evening."

The Imperial Golden Crown Harmonizers captures the same loose and funky, yet deeply soulful and rousing groove of the group's live performances, while also reflecting the evolving nature of the band. Keyboardist Nick Connelly came aboard after the recording, whereas Frosty, the disc's drummer, is no longer with the band.

One big surprise of both the live show and the CD is the vocal talents of Martha Merriell. Currently performing as a jazz act with a regular gig at Cedar Street, she was recommended to the Harmonizers by Milligan, who was using her as a backup singer in the Blue Monday Band at Antone's. Welbourne recalls Merriell stopping by Shaggy's and singing a song every now and then.

"Eventually, we told her she better stick around, too," grins Welbourne.

"She's a real chanteuse kind of a singer," adds Newcomb. "She's an incredible addition to the band. When she joined, it took things in a good direction. She added something that was needed."

Merriell sums up not only her experience with the Imperial Golden Crown Harmonizers, but the whole charitable concern.

"I love what this band is about," she enthuses. "There's no egos involved. These guys have been more than generous to me. I consider myself the rookie of the band. Singing this kind of music was real new to me, and I just felt really grateful that they welcomed me and treated me as an equal."

She pauses for a second.

"You know, I may have a trained instrument, but when Scrappy sings he can break your heart."

The Imperial Golden Crown Harmonizers celebrate their CD release at the Empanada Parlour this Sunday, June 24, starting at 1pm.