It's Not Just An Adventure 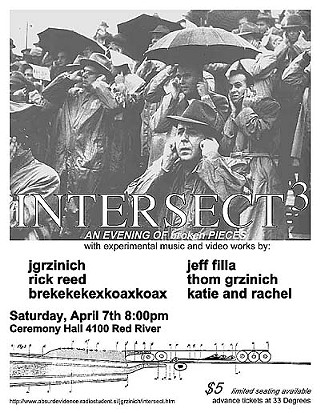 It was either blasphemy or genius; it's often hard to differentiate. An amplified wire running across the church's ceiling. Gutted guitars laid flat on tables, cables and coils protruding every which way. Flickering scenes of abstraction projected onto a backdrop. Mysterious glowing boxes and antennae, conjuring sounds that were at once unearthly and wholly natural, like the ebb and flow of the Earth's biosphere.

Such was "Intersect3" in early April at Ceremony Hall, a decommissioned chapel across from Hancock Center in Hyde Park that has been home base in recent years to local adventurous music. And this may have been its most adventurous performance yet, a rare gathering of some of Austin's most talented experimental musicians.

Most of the evening's performers regularly produce music in their living rooms and for friends, often recording albums that are distributed nationally and internationally. What they don't normally do is come out of the woodwork to perform here in town, and for that reason alone, the craftsmanship of the evening's performance was surprisingly smooth .

"All of that seemed to come out fully formed, didn't it?" muses Rick Reed, one of the evening's performers. Reed's performance consisted of sound sculptures using shortwave radio and sine wave generators to tap into the electromagnetic spectrum, an enthralling accompaniment to his abstract film pieces.

The evening's other local performers, Jeff Filla, jgrzinich, Thom Grzinich, and Brekekekexkoaxkoax, performed equally engrossing pieces involving live electronics, film projection, bowed strings, and nontraditional piano playing. Together with the similarly focused Charalambides and noisier improvisational troupes such as Primordial Undermind, Curse of Blefescu, Iron Kite, Autodidact, and the Aurora Plastics Company, these performers comprise a staunchly adventurous avant-garde underbelly to the Austin music scene, even as they fail to find a place within the nightclub paradigm.

Rick Reed, for his part, has been in Austin for over 20 years, and all the while there's been a small cadre of experimental musicians blurring the lines between noise and music, abstraction and composition. Reed's Fear and Tension Corporation produced progressive and industrial electronic music throughout the Eighties in the shadow of Raul's punk and New Wave. In the Nineties, he formed the free-noise Abrasion Ensemble and began co-hosting KOOP's otherworldly Sunday night show Commercial Suicide.

Reed had a compilation released by Sonic Youth's Thurston Moore on his Ecstatic Peace label, and is now working on a split record with Keith Rowe of legendary English improv group AMM for the formerly Austin-based avant-repertory Beta-Lactam Ring Records. Reed disbanded the Abrasion Ensemble last year to focus on the more tranquil aspects of sound, but his enthusiasm for sonic exploration remains.

"There's always been a subculture of a lot of this stuff," Reed says. "But it seems as though there's now a larger audience for it. I don't know if maybe the Internet has allowed more access to information, but as far as the sound, the time has come for it."

Rick Reed returns to Commercial Suicide as a guest host, Sunday, June 17, on KOOP 91.7FM at 8pm. Reed will play Abrasion Ensemble music, new and unreleased material, and possibly a short live set on the air.