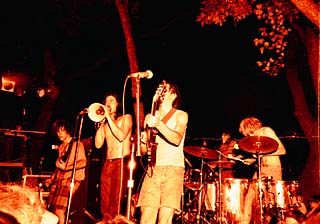 The Butthole Surfers get the wood out at Woodshock, 1986. (Photo By Jerry Milton)

So much for stinking up the great outdoors. After much hoopla and general commotion, this weekend's Woodshock Festival 2001 has gotten the boot from Waterloo Park (home of the first Woodshock 20 years ago), where it would have run noon-10pm each night. Instead, the site of last weekend's successful GarageShock relocation -- Emo's -- will host the two-day music blowout on Saturday (1pm-2am) and Sunday (2pm-midnight). Not that two days and nights of cool bands at Emo's is in itself a bad thing, mind you, but let's back up a bit.

On Friday of last week, final approval for the new Woodshock was seemingly in the bag. Blaine Hurlbut, on whose ranch several of the finest Woodshocks were held, left e-mails and phone messages at the Chronicle declaring his support for the event. "Just so everybody knows, this is the real, original thing," he said, knowing that the festival has a history of competing Woodshocks and arguments over who own the name (kinda like the Bob Marley Festival chaos of a few years back). Then on Sunday came a different e-mail, announcing that, "Woodshock 2001 will not be held at Waterloo Park as originally planned; the festival was unable to obtain liquor liability insurance. All tickets purchased for the event at Waterloo Park will be honored at Emo's." What's the big deal about where Woodshock gets held this year? Well, take a look at its history.

In 1981, the first Woodshock music festival was held in Waterloo Park, beginning a history of a sorta-annual, two-day extravaganza of music and freeform craziness that grew from the Sharon Tate's Baby's Backyard Jamboree on Nueces the previous year. Woodshock, the original festival, featured 14 bands in six hours at Waterloo Park, with the first poster done by a pre-Jesus Lizard David Yow. As you may have guessed, the poster was a savage knock-off of the famous Woodstock poster, with the peaceful bird perched on a guitar. In the Yow version, the bird is profiled belly-up, with an "X" over his eye, a broken wing, and toe tag. In 1983, a similar event followed at the Hurlbut Ranch with the same name and many of the same acts (most of them local), including Max & the Makeups, the Jitters, Crotch Rot, the Offenders, Channel 3, the Ideals, Skank, New Torpedoes, Human Drama, Bang Gang, Tiger Roos, and Pleasure Method.

Over the years, the event grew larger and more chaotic, bouncing around from one big, out-of-the-way location to another as more and more bands -- local and otherwise -- tried to get into the act. Woodshock '85 was recorded by local producer/musician Mike Alvarez, and a double album was released, featuring live performances from that year's acts, a veritable who's who of the local cutting-edge music scene at the time, including: Daniel Johnston, Larry Seaman, Texas Instruments, Room City, the Vertibeads, Dharma Bums, the Ideals, Glass Eye, Doctor's Mob, Last Will, the Reivers, Pez, the Dig, Crybabys, Cargo Cult (with Biscuit, ex of the Big Boys), the Offenders, the U-Men, Moto-X, Poison 13, Not For Sale, Son of Sam, and the fest's unofficial mascots, the Hickoids. There were also Woodshocks at Camp Ben McCullough in Driftwood, at other weird ranches, and one was even jammed into the Cave Club (where now resides the Atomic Cafe) when either bad weather or political machinations kept it from being held at its planned outdoor location. By the early Nineties, those involved in planning the event were either getting older, sick of the Herculean effort required to put it on, or stoned, because it was soon forgotten.

Now, in 2001, as Austin becomes less like Austin every day, a new Woodshock at its old location seemed like the perfect shot in the arm to celebrate the enduring spirit of the city, and the continuing energy of its musical wealth. Instead, much like the announcement that permit trouble is partially responsible for the absence of this year's Willie Nelson Fourth of July Picnic in Luckenbach, Woodshock 2001 is destined to be another trophy on the road of apathy by the city of Austin with regard to the creative element it supposedly champions. (Not to mention I would've never booked my band into a 10pm slot elsewhere on Saturday if I'd known Woodshock was going on all goddamn night! Fuckers.)

How exactly did this last-minute change come to be necessary, forcing the new posters to declare Woodshock an "almost outdoors" event? Hickoid Jeff Smith, the man at the helm this time around, is cagey, but clearly unhappy about the turn of events. He doesn't want to say anything that will bring him more grief before the weekend has passed, but it's evident he feels that he was rooked by the powers that be. "We pursued [the necessary permits and licenses] through the proper channels and didn't attempt to do anything sleazy," he says reluctantly, "and we thought [the permits] would be obtained in a timely manner." Instead, what he was first told would be "no big deal" turned into a flat denial of liquor liability insurance. Along the way, Smith says, he was only given figures relating to Fiesta Gardens, and never shown anything actually relating to the location he was planning to use. "It was wrong, it was stalled, and it was railroaded!" comes a shout from behind us, where an associate of Smith's has been listening to his quiet assessment of the situation, after which Smith declines to give further details of the situation beyond noting that he's not a rich, powerful promoter. "I can't afford to give a $10,000 party," says Smith. "That's what it comes down to."

Hurlbut, for his part, assigns some of the blame for the city's absence of support on a recent Austin American-Statesman article and awareness of the wild and not necessarily safety-conscious nature of earlier, more freeform Woodshocks. In the Chronicle's attempt to discern exactly who denied the insurance, the city Public Information Office claimed it was a TABC matter, while the TABC said as an event in a city park, it was in fact a city matter. In any case, says Smith, "We were looking at either the gig totally cratering, moving it, or finding some sort of alternate insurance, with a week to go." Option two seemed the only acceptable possibility. Moving the fest to a club will probably eliminate many of the festive parts of the show, like the planned "Texas Death-Cage Match of the Beer Drinking Gospel Brunch Bands," and while it's great to have all these bands playing over a two-day period, without the sun beating down and turkey legs, coolers, and towels spread out all around, plus people sneaking off into the bushes to avoid a long line at the "Oh-Boy," it just won't be the same. "Ah, well," sighs Smith, "at least the new Woodshock will fit in with the old Austin 'Can't Do' attitude."

The San Diego Reader has a news flash this week regarding the seemingly never-to-be-released next Butthole Surfers LP. According to the weekly, the band's current label, Hollywood Records, served DJ Mike Halloran of California radio station KFSD-FM with a cease-and-desist order May 16 after he had played the unreleased new Buttholes song, "Dracula in Houston" on May 13 and 14 without permission. Further legal action was threatened if KFSD played "Dracula" again before its official release -- whenever the hell that is; the Reader article suggests August, but we'll see. (Check: www.sdreader.com/ed/calendar/blurt/). Those of you who can read will want to keep a peeper out for Michael Azerrad's Our Band Could Be Your Life: Scenes From the American Rock Underground 1981-1991, also due out by August. Someone already snagged the office's advance copy, but I'm told the book has a healthy dose of information on the Buttholes, plus more banter about other influential Austin bands of the period… Live music fans will want to tune in to KGSR on Friday, when Kevin Connor presents the first in a series of monthly broadcasts called Lone Star State of Mind -- Live From the Saxon Pub. That's 10pm to midnight on 107.1 KGSR, with this week's musical guests being Kacy Crowley, Jon Dee Graham, and Papa Mali. On the Jody Denberg side of things, listen for an interview with Lucinda Williams titled "In Touch With Lucinda Williams' Essence" during the KGSR Sunday Night News, 8-10pm. This interview, a nationally distributed promotional disc recorded in Austin last month, will be heard across the country this weekend as many stations are giving away copies of Williams' new album Essence before it hits stores June 2. The disc includes a live version of "Blue," recorded at KGSR during South by Southwest 2001, which will also be featured on this year's Broadcasts comp, with who else but Ms. Lucinda on the cover… -- Raoul Hernandez, Andy Langer