Willie Nelson, not burnt down 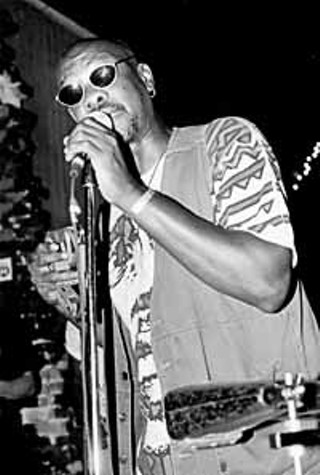 Willie or Won't He

The rumors have been flying this week about all things Willie Nelson-related, with my personal favorite, all-encompassing question being the one posed to me earlier this week by a frantic woman at the office: "Is it true that Willie's canceled the Fourth of July Picnic in Luckenbach this year because he lost his prized guitar 'Trigger' in the fire when Pedernales Studio burned down?!?" Okay, hang on a second. Let's start with the fire, shall we? Yes, there was one. In fact, there were two fires in two days at Pedernales last week. The first, mostly harmless one was so mysterious that the fire department investigators were actually offering up theories involving (I swear I'm not making this up) squirrels carrying around lit cigarettes. After the second, more damaging blaze, however, the blame was eventually placed on a faulty cut-off box in the studio's air conditioning system. How much damage was done? "Enough," exclaims owner Freddy Fletcher, who tells me that the acts recording there have been "smoked out" for the time being, and that the studio will be shut down for several weeks at least, during which time the Pedernales folks will be taking advantage of the situation to do whatever renovations the studio might already have been in need of. There's also concern that some of the irreplaceables in the tape vaults (including some Willie material) may have been damaged, though Fletcher says that mostly what we're talking about here is water damage, something that recording media is thankfully better at repelling than fire.

Secondly, another yes to the part about Nelson calling off this year's Picnic -- Willie has "just said no" to this year's annual Fourth of July Picnic in tiny Luckenbach, Texas. VelAnne Howle, self-described "Mare" of Luckenbach, says that 'twas the long arm of the law that's gone and tethered up Willie's goat. What's happened, according to Howle, is that between the 1999 Luckenbach Picnic and today, there's been a change in the Mass Gatherings Act. The law, leveling certain regulations on gatherings of (a) more than 5,000 people, and (b) those lasting more than 12 hours, were circumvented for the last Luckenbach picnic, but sometime afterward, the MGA was altered. Fletcher says that from what he's heard, by the time it was found that there would be a problem, it was already too late to attempt to fix it. Howle comments, "We heard that Willie just decided to take a break and take the Fourth off this year rather than deal with it." Instead of wallowing in, well, whatever there is around Luckenbach to wallow in, the little town that cain't is celebrating its 150th birthday (for the third year in a row) this Saturday with all-day festivities including music, armadillo races, the antics of Sunshine the Clown, a one-hole golf tournament, washer pitching, dominos, and horseshoes. For musical entertainment, hometown boy Monte Montgomery performs in the town's dancehall at 9pm, with the Benjamin Allen Band opening the show at 8. Daytime activities are free of charge, with a $15 charge for the evening's events. For more information call 800/311-8990 or just drive out there and ask whoever's closest. If you're looking for a slightly larger town to visit this weekend, by the way, don't forget it's Kerrville Folk Festival time. Today (Thursday) is this year's kickoff for the 18-day festival, and the acts playing out tonight include Chris Smither, Betty Elders, Austin Lounge Lizards, and Ray Wylie Hubbard. Go to www.kerrville-music.com for full schedule and such. Careful with those campfires!

Michael E. Johnson, longtime Austin musician and co-founder of Austin's own Killer Bees, passed away last week after a long bout with heart disease that had been previously discussed in this column and which had caused many stops and starts in his musical career. "We retired the band on New Year's of the millennium," recalls partner Malcolm Welbourne, sadly recounting how Johnson's disease had progressed since his first heart attack three years ago and forced a slowdown. Friend and former manager Louis Jay Meyers, calling from his current residence in Amsterdam, remembered Johnson as "a big inspiration to a lot of folks. He took reggae to a lot of people who wouldn't have gotten it otherwise; to places like Fargo, North Dakota, Springfield, Missouri." Welbourne goes one further: "We could be walking down the street in Paris and a Japanese couple would come up shouting, 'Michael E. Johnson! It's Michael E. Johnson!'" A tribute concert in memory of Johnson is planned for Monday at the Flamingo Cantina, with doors opening at 7pm. Welbourne, who co-founded the Killer Bees with Johnson, will perform with his gospel group, the Imperial Golden Crown Harmonizers, as well as with the "lots and lots" of former members of the Killer Bees. Don't expect this to be the last you hear of the Bees, either, as Meyers says he and Welbourne will hopefully begin work soon on a tribute anthology of Johnson's music. "There's lots of unreleased material on the shelf," says Meyers, "probably three albums' worth!"

Another page in the book of Austin legends was turned for the last time this week, with the death of Thirteenth Floor Elevators bassist Danny Galindo, who passed away last Thursday from complications associated with hepatitis C. A tribute on an Elevators Web site describes Galindo as, "an altar boy, an athlete, a musician and a registered nurse," and notes that he "went out a winner, with his demons behind him, and at peace with himself and the world." To read the entire eulogy, go to http://communities.msn.com/RokyErickson/home.htm. A last-minute flash of great news on the Elevators front, however, comes in the form of word that Roky Erickson has spent the past week in Shoal Creek and has begun receiving medical treatment and medication for the first time in 15 years! Erickson is already showing signs of improvement, and bands influenced by him should start practicing for upcoming benefits (times and places to be announced) geared toward getting and keeping the Texan psychedelic music pioneer mentally and physically healthy!

If It's Tuesday, This Must Be Steamboat

It's been a long time -- a whole year or so -- since the last installment in our never-ending soap opera, "Where the Steamboat Turns." Last we heard, owner Danny Crooks had been stymied yet again in his hunt to find a new home for his club since its ouster from Sixth Street two years ago after 20-odd years of being an Entertainment District landmark. As we return, Crooks is getting ready for a party at Fat Tuesday's. "I have to get up off my ass," he declares without hesitating. "One man can only smoke so much pot and watch so many video games!" As a result of that revelation, Crooks is making a return to the nightclub business, for one night at least. This Sunday at Fat Tuesday's, starting at around 4pm, burgers and music will sizzle at the "Steamroller BBQ Smokeout," with Crooks overseeing the show. Entertainment begins with an acoustic set from Wayne Sutton (Sister Seven) and Kevin McKinney (Soul Hat) followed by Alice Rose (formerly PigGie Hat), 54 Seconds, Patrice Pike (Sister Seven), Black Box Rebellion, MC Overlord, and of course Steamroller. Crooks is uneasy talking about what might happen beyond Sunday. Next up, he says, is a meeting at Fat Tuesday next Tuesday at 2pm, at which he'll be "trying to get the opinions of as many musicians as I can, anybody from the old Steamboat days or just anybody who feels they're being poorly treated by the clubs" on the matter of what they would like to see happen in the Austin music scene in the near future. For now, after the party and the meeting, Crooks will merely be "helping out" on a few things at the club. "It's still up in the air," he says restlessly, "a lot of the bands I would want to work with have commitments through the end of June anyhow, so I'll be keeping a low profile through then." We all know the old saw "you can't go home again," but maybe, just maybe, you can go across the street from home, and that'll work out better.

The benefit last Sunday afternoon at Outlaws in Liberty Hill for the medical bills of former Henry's Bar & Grill owner and cancer sufferer James Henry was a rousing success, both monetarily and musically. Says one attendee, "The most successful part of it was that James got to hear some of his favorite bands and visit with his friends and family." Junior Brown was the last act to play, and from what I hear, he drove his bus all the way down from Oklahoma and back for the occasion. For those who missed the show and still wish to make a donation, Henry's address is 1481 Hwy. 183 N., Liberty Hill, TX 78642… Emo's anniversary, including an amazing Dictators show on Joey Ramone's birthday last Saturday, wasn't enough? A major source of insanity this weekend is sure to be the three-day Garage Shock at Emo's (not to be confused with next weekend's Woodshock in Waterloo Park), the Estrus Records' spectacle boasting loads of blasting music from the likes of Japan's Estrella 20/20, Chicago saxman Ken Vandermark's School Days, the Total Direct Sound Group Action Committee and Monkeywrench (both featuring Tim Kerr), Ohio's Cyberman, the Fatal Flying Guiloteens, Zen Guerilla, Canada's the Von Zippers, and Spot, who as the Emo's e-mailer accurately points out, "will probably still refuse to talk about producing Damaged and Zen Arcade." All this, plus the inside bar will be showing vintage B-movies. Check Music Recommended listings for the full damage… The Regrettes, also descending on Emo's this week -- Wednesday on the "All Girl Bands" lineup -- will be recording with Raunch Hands guitarist Mike Mariconda, who's also produced albums for the New Bomb Turks and the Hard Feelings… It's anniversary time at the Saxon Pub this week, so if you haven't been there in a while, why not pop down South Lamar for a change? Among the more interesting acts during the week will be Inara George opening for Ian Moore at 8pm next Wednesday. Yep, Inara is Lowell George's daughter, as you may have guessed… After an initial burst of great popularity among Austin's erotic dancing community, Drama Queen's song "I Wanna Date a Dancer" was reportedly banned from a certain local "gentleman's club" after the song's rousing success prompted management to more closely examine the lyrics. What specific lyrics caused the ruckus? Well, I don't have the CD handy, but if memory serves, the line that follows the title phrase is "So I can get all my drugs for free"…