All There in the Music

The Wild Dreams of Mandy Mercier 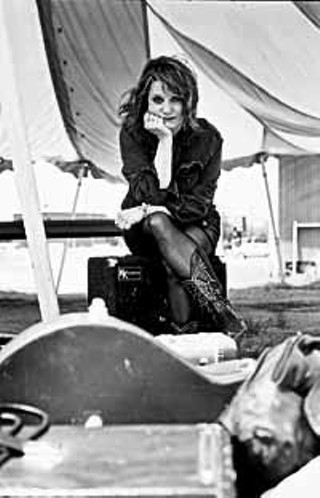 On a mild evening in early April, Mandy Mercier sets up on the makeshift stage at the Waterloo Ice House on 38th Street. The atmosphere at the restaurant-by-day/venue-by-night/all-the-time beer joint is folksy, pleasantly reminiscent of Austin's burgeoning singer-songwriter scene in the Seventies, a feeling refreshed when accompanist Champ Hood pulls up a chair next to Mandy.

Preparation is leisurely tonight, time to stop and chat with friends drifting in, answer a question or two about her guitar, change a string, and adjust the mike. There's no rush to fill a 45-minute slot, no opening act or headliner to contend with. With fresh material from a new album, Wild Dreams of the Shy Boys, and a treasure chest of covers, it's just Mandy Mercier and songs of the heart.

If it sounds too "Good Ol' Days" to evoke the Austin of the Seventies, it's worth noting that Mercier's local history begins at the end of that decade. The list of names from the era starts off with a bang: Lyle Lovett, Nanci Griffith, Townes Van Zandt, Lucinda Williams. Not long after, when you hit Blaze Foley and Walter Hyatt, Mercier's name pops up. Singer, songwriter, guitarist, fiddler, lover, and free spirit wrapped up in one, Mandy Mercier is less a jack-of-all-trades than a force of nature.

Coast to Coast to Third Coast

Her name sounds Southern, perhaps even Cajun, but Mercier is East Coast-bred, born in Westport, Conn., and schooled on classical violin. Her youthful rebellion in the late Sixties naturally meant hitchhiking to Haight-Ashbury.

"What a matrix that time was," says Mercier with awe. "It all just turned around."

Mercier turned with it and did her time on the hippie circuit. She returned to the East Coast, alternately working in a head shop, studying, and trying to get her rock & roll act together. The latter was not hard, as she had a willing partner in a musician named Billy Borsey.

Borsey went his own way in the mid-Seventies, changing his name to Willy DeVille and entertaining a modicum of popularity in the late Seventies as Mink DeVille. Mandy immersed herself in New York's lively music scene at Max's Kansas City and Kenny's Castaways, still strong with the singer-songwriter sensibility of the Sixties, but with a decidedly modern and punk slant. She also had her first taste of artist packaging.

"People said, 'Come to Nashville and put on a miniskirt, play the fiddle, and be Louise Mandrell!" laughs Mercier. "I was so full of integrity. I turned down record deals in New York, because they wanted me, but didn't want my band. 'No, this is my band!' I'd say. Six months later 'my band' kicked me out!

"There have been times since, trudging to my day job, that I wish I'd taken something, but at the time it didn't feel like a choice. I might not have been sure what I stood for, but I knew what I didn't stand for."

In all that upheaval, Mandy got a residency with a duet partner at another bar much to her liking -- the Lone Star Cafe. There she was introduced to the music and musicians of Austin, and soon enough decided to see for herself.

"In '79, my partner and I went to New Orleans for six months and played on Bourbon Street," Mercier recalls. "We came here after New Year's 1980. The Armadillo was still open; we played there and opened for [Hyatt's] Uncle Walt's band. The wave was cresting, just exploding.

"They were the first friends I made here -- Walter, Champ, and David [Rodriguez]. Over at the Alamo was Butch [Hancock] and Jimmie [Dale Gilmore]. Lucinda came back in '81. I met Shake Russell and Dana Cooper then, Jubal [Clark], Ray Wylie [Hubbard], Rusty Wier, Gary P. [Nunn]. The blues thing was also happening -- Stevie Vaughan -- and punk was still here. Any night of the week the music was great!

"That's why the connections are so precious, playing a Walter song with Champ, or a David Rodriguez song with Shake Russell -- Jimmie playing Butch. We all knew David and Walter and Shake and Jimmie and Butch and so on. It's all there in the music."

"It's all there in the music" could well be Mandy Mercier's motto. When she plays her fiddle, tiny gleaming hearts fly off the end of the bow. She plants her small frame firmly on the floor, feet braced, and leans into the instrument as if to remind it she is the master. She closes her misty green eyes and then come the notes, the soulful fiddle, the heartbreak strings, and soaring melodies. Onstage, she wears the hats of sideman, back-up vocalist, duet partner, and frontwoman with equal aplomb.

For all her ball o' fire energy, Mercier will tell you that romantic involvement makes for better songs than relationships. There was guitarist Tom Pacheco from the Hellhounds, in which she also played. There was Blaze Foley ("It wasn't a long romance, but we were always tight"). There was Ray Wylie Hubbard, with whom she toured and shot pool. It's an attraction she describes as getting "turned on [by men] because of how they played and what they knew based on what they wrote about -- what they represented."

And then there was Clyde Woodward Jr. No, this isn't Lucinda Williams' biography. In the early Eighties, Mercier, Williams, and the infamous Woodward shared a house in Hyde Park, living so sparsely the three sat on speakers at the kitchen table because they had no chairs. Woodward was an irresistible charmer who sometimes played at "managing" his talented girlfriends and held tenaciously to the slacker work ethic. Williams and Woodward moved to L.A. in 1987 and Mercier followed shortly thereafter. She kept busy, as music at the Palomino club suited her fiery stage presence and won her "Female Vocalist of the Year" there. Lucinda and Clyde broke up, after which Mandy and Clyde then shared a brief liaison.

"For my birthday one year, he bought me a pool cue and a locker at Hollywood Billiards," she reminisces. "He gave me a box with a key inside and it opened the locker. Even when we were 'dating,' so to speak, Lucinda was the love of his life.

Woodward's life ended with liver failure four years later. Williams wrote "Lake Charles" and "2 Cool 2 Be Forgotten" on 1998's Car Wheels on a Gravel Road about him, but Mercier had already beaten her to the punch, memorializing Woodward with "Texas Wake" on her first full-length recording, 1992's Forgiveness and Rage.

Mandy Mercier Live followed Forgiveness and Rage in '94 and carried her through '97, right up to the August night when something went wrong, very wrong, with her body. Mercier was diagnosed with a fibroid tumor and underwent surgery because "I could feel myself dying, ebbing away." The illness brought inspiration that rejuvenated Mercier's muse, the same muse that delivered Wild Dreams of the Shy Boys earlier this year.

"I had been really discouraged about my career for a while, but the weird thing was, I was so sick I literally couldn't do anything but think up songs and play my guitar lying down in bed," she says. "Being sick was almost a blessing in disguise, creatively.

"My friends like Steve Hepler, Champ, and Marvin [Dykhuis] would come by and work on songs with me, bring me guitar strings, love, encouragement, and support. Other events, like the camping ban, inspired Shy Boys tunes like "Homeless" and "Columbine." Others were written while the album was in progress; "Make It Back to Midnight" was "inspired by working with Shake and Dana."

Mercier used her recovery time to "refresh and regroup," taking renewed interest in reading and writing. Her songwriting sharpened and her friends rallied to her financial assistance with star-studded benefits. A performer who shifts between solo/duo and full band as well as sideman gigs, Mercier might headline her own show one weekend, then head out on short notice to join Billy Joe Shaver. It's a life that doesn't always fit the traditional female role.

"I'll drive 14 [hours] by myself," she explains. "I'll haul heavy equipment and figure out how to hook it up and change my batteries and strings and tires for my car, but there's always this part of me that wants to be a princess in tower with the guy riding up and saying, 'Come with me now. We'll have a band together.' That's the bedrock of sexuality, that no matter how powerful you are you want a man more powerful.

"I'm Mandy Mercier. I've done this, this, this, and this. I've recorded with this person, that person, and others. I can't just go be someone's wife. I can't turn in that past and say, 'Oh I'm ready to be straight now.' It's too late!"

Lost love, gender issues, and even second chances seem so far away on this Friday evening at Waterloo Ice House. Mercier opens her set with a warm welcome and a shy smile. A few songs in, she introduces Calvin Russell's "Eightball" with a reference to "all the drunk and homeless men we love," before moving on to Lucinda and Blaze Foley covers and some of her own songs from Shy Boys, including "Ready for Me" and "Homeless."

Champ Hood tucks the fiddle under his chin, drops the bow to the strings, and lets the notes fly, his fair curls forming an angelic halo in contrast to Mercier, who's dressed in a black jacket and black lacy skirt. She looks down at her guitar and begins to sing in her spirited, soulful voice. For the next two hours, she'll pour her heart out about her own wild dreams.

"I'm that place in the desert where the sun is too much," Mercier swears in "Ready For Me." There are few secrets in the open book of her life, but there's no need to read between the lines. It is, as she would say, all there in the music.