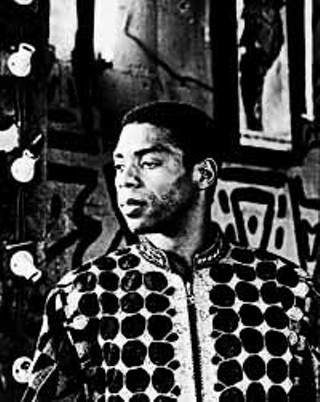 Femi Kuti is weary. The Nigerian musician is calling from a Paris studio where he's recording his second album on MCA. Things aren't going according to plan.

"Every day," says Femi, as he's commonly known, with a slow laugh, "is a tough day in the studio."

But technical difficulties aren't the only things weighing Femi down. For starters, being the eldest son of Nigeria's most famous musician and political activist, Fela Kuti, is no small mantle to bear (see "Chief Priest of the Shrine,"). Not only is Femi responsible for carrying on the legacy of his father's musical creation -- Afrobeat -- but Kuti the Younger also has little choice but to espouse his father's staunch political activism. Nigeria suffers from a corrupt military regime similar to the one that jailed Fela so many times during his lifetime that people lost count.

Sluggish at the beginning of the conversation, the 38-year-old Femi quickly gains steam as he talks about music's power to heal, his father, and Africa's political situation.

"Democracy in Nigeria is not practiced like it should be," declares Femi. "The West and America should be very unhappy with the Nigerian government now."

Femi began his musical training by osmosis, learning all he could from hearing his father's band, plus traditional Yoruba music and American R&B, funk, jazz, and soul. At 15, Femi asked his father if he could join his band as a saxophonist, and Fela agreed. Thus began the son's musical education, a tenure that took a heavy turn in 1984.

A Peter Tosh/Fela Kuti double bill was on the docket at the Hollywood Bowl that year, but as Fela prepared to fly overseas with son and band, the Nigerian kleptocracy prevented him from leaving the country. Femi filled in for his father and put on an ace performance under a bright spotlight. From that night on, Femi knew that he wanted to be a band leader.

When Fela asked his son to take over his band a few years later, Femi declined, forming his own band instead. Positive Force began in 1986, and since then Femi has worked tirelessly to both further his father's legacy and carve out a niche of his own sound in it. He's been successful, but it hasn't been easy, his career marked by untimely death, record company setbacks, and more hassles from the unscrupulous government.

In the mid-Nineties, Femi landed a deal with Taboo, Motown's ill-fated African imprint, releasing Wonder Wonder at the halfway point of the decade. Things looked up for Femi, and Positive Force toured heavily. Rather than basking in the fruits of his labor, however, he grieved: During a three-month period in 1997, both his father and his sister died. To make matters worse, his deal with Taboo imploded.

Fortunately, fate has a way of frowning one minute and smiling the next, and not long after, Polygram's French label Barclay signed Femi and released his potent Shoki Shoki album in Europe. In 1999, MCA picked up the North American distribution rights to the LP, and with two albums due out in the U.S. this year, and another string of stateside tour dates, Femi is coming on strong.

With the tour kicking off in Austin before Kuti & Co. head off to the New Orleans Jazz & Heritage Festival, Femi isn't too concerned about the set list.

As with Fela, Femi's music seeks to entertain as well as inform, but will non-African audiences understand his outspoken lyrics about the ills of post-colonial Africa?

"I think anybody who listens to the song gets the message," begins Kuti, breaking it down further: "It's simple: African leaders are not doing what they need to be doing. Let's not even go back as far as the slave trade. Investment was put into Africa, over how many years now? Let's just say since 1960. The buildings, the structures, nothing has been maintained, nothing has been done.

"It's just corrupt leaders taking the money. Even when they do put the money in Africa, projects are lousy and not well done. They don't give workers enough money for their jobs, so people get poorer. And that causes armed robbery, so people are being shot."

For Femi, this must be a nightmarish case of déjô vu. The current head of Nigeria, Olusegun Obasanjo, is the same corrupt leader who presided over the attack on his father's Kalakuta residence in 1977, where more than 1,000 government troops beat children, raped women, burned the building, destroyed a free medical clinic, and fractured the skulls of both Femi's uncle and grandmother. His grandmother died from the injuries. A government "inquiry" found only "unknown" soldiers to blame.

When Femi talks about the corrupt African leaders, he is pained not only for himself, but for his family and indeed everyone who suffers in Mother Africa.

"Africa should be full of abundance and joy, with festivals everywhere. But investment is not being done properly, and so people cannot afford to have a good life. I feel kind of depressed when I'm having a good time knowing full well that even my family in Nigeria cannot even have a good time."

Like many African and African Diaspora musical forms -- the blues and reggae being prime examples -- Afrobeat offers hope against painful social situations. Femi spells it out:

"What I do with my music is bring that small comfort to the African man, to myself, and to all my listeners. I don't try to make the lyrics too sad, just soulful."

Given the joyous nature of Afrobeat, the music is anything but sad. Soulful, on the other hand, is understatement.

Like Fela, when Femi writes a song with that dense Afrobeat quilt of sound, he writes it all: bassline, melodies, rhythm, lyrics, horn harmonies, etc. Yet unlike the epic length of his father's tunes, Femi's songs are tighter and punchier, the 12 songs of Shoki Shoki being fine examples. The shortest, a bawdy, horn-propelled rave up called "Beng Beng Beng," is just under five minutes, but nearly all of the songs leave you wanting more. Femi and Positive Force oblige onstage, where they stretch songs out organically.

Because of the supposedly suggestive subject matter of "Beng Beng Beng," the song has been banned by the Nigerian government, in spite of the fact that more explicit media is shown on cable TV or sold in the street. Femi stays above the fray by speaking directly to the people.

"For husbands and wives, etc., I hope my song will encourage their sexual appetite."

Being the political activist he is, Femi's actions speak louder than his well-chosen and forceful words. Instead of wasting time and effort reacting to such governmental bans, the singer uses his charisma, intelligence and visibility to speak out about Africa's most important issue -- AIDS. Of the 36 million people worldwide infected with the virus, more than 70% live in sub-Saharan Africa, more than 6,500 people dying each day from the disease.

As is the nature of such a terrible epidemic, AIDS has touched Femi as it has so families and friends around the globe: it killed his father, a stubborn man who never admitted he had the incurable disease. In addition to his AIDS awareness campaign, Femi also works with international organizations like UNICEF to try to counteract the lethal sickness. Lest admirers think Femi is in danger of becoming a full-time social activist, the musician in him demurs.

"No, I don't think so," says Kuti quickly and firmly. "I don't want to be drawn into any politics. I just think about the things I see, and I want to have a good time playing my music. I think my fans demand that of me."

Having a good time with Femi's music isn't difficult, especially when he calls in friends like the Roots. Fela cursed a blue streak after hearing Bill Laswell's remix of "Army Arrangement," yet Femi actively embraces the possibilities involved in others cutting and pasting his work. The Roots' rendition of "Blackman Know Yourself" -- one of three remixes on Shoki Shoki -- is pretty much what you'd expect. Kick ass.

"Hip-hop has gotten a lot of its rhythm from Afrobeat," explains Kuti. "I know a lot of hip-hop musicians have listened to Afrobeat, and I see the similarities there. They are both dance music, and some hip-hop has serious lyrics -- maybe too serious even -- but some I can relate to very well."

When asked what he's currently listening to, it's clear that Femi is a big sponge.

Things are hopping on the Kuti Family music front. Last year MCA re-released no fewer than 20 of Fela Kuti's albums, with a dozen more coming this summer. A Fela tribute album, Red+Hot+Riot will also be released this fall, as will an album's worth of Shoki Shoki remixes.

While clearly influenced by his famous father, Femi is very much his own man. Just as Fela created something new using existing musical forms and his formidable talent, Femi does the same by actively embracing technology and collaboration. Not only worthy of the family name, Femi adds value to it, enriching the Kuti family legacy. Or as the leadoff track on Shoki Shoki says, "Truth Don Die."

And while Femi is certainly proud of what both he and his father have accomplished, he's not cocky when it comes to taking credit.

"The music just comes," says Femi, "and I don't question it. I prefer the music to just drop out from where it drops out from."

Does it drop from the Yoruba spiritual entity Eledumare, to whom Femi gives special thanks on Shoki Shoki?

"Must be," confirms Femi after a thoughtful pause. "Mankind can't really say where sound comes from. When it comes, it's there -- you could say it's a kind of gift."