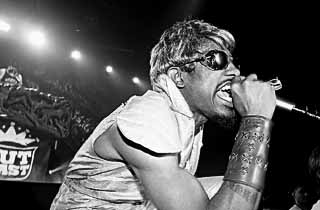 The South has risen again. "We love the dirty South," announced MC Poon Daddy at 8pm straight up, out front of an enormous American flag. A black flag. Given opener Ludacris' double-platinum Def Jam South debooty, Back for the First Time -- Nelly-style scratch with extra X's -- ol' Dixie's already been restitched. "Representing the southside of ATL," Ludacris, his two MCs and one DJ brought enough beats and bounce to burn down Atlanta a second time. With no time, no fancy stage set, no full house, young Luda had to bring the noise hard and fast, and choosing the obvious pistol pumps from First Time -- "Stick 'em Up," "Catch Up," and just-add-ice classic, "Ho" -- he came faster than a Catholic priest. "All I see is white people," said MC LC, cocky, cagey -- charismatic. "White people make some noise." They did; the ladies sang every word of "What's Your Fantasy." Y'know, wanna lick you from your head to your toes. "I don't think Texas knows who I am," he taunted. They do now. Quicker than you could say stop-time set change, ATL was back fucking with ATX. "What's up San Antonio?!?" hollered the Poon the moment the hall went black. Sold-out throng brought the boos. "April Fools!!!!!" And then it was on, the banner for hip-hop nation rising to reveal a stage-set straight outta The Flinstones, D'Angelo by way of early George Clinton. Doing his best Bootsy, Andre 3000 strutted out in an intergalactic jumpsuit -- sleeveless, electric orange foil with protruding pee-pee -- while Big Boi sported wig and sunglasses too, but let OutKast's new line of duds do the talking through his partner. Dwellers of Stankonia freaked right off the bat on the fuming "Gasoline Dreams," Andre and B-Boi posse-d by guitar, bass, backup singers, a quartet of ninja catchers doing the Solid Gold dance in between backstage wardrobe changes, and a DJ towering from a centerstage podium looking like Bedrock's Trump Tower. "So Fresh, So Clean," "Humble Mumble," "We Luv Deez Hoez" -- all present and buggin', with Andre doing the gorilla bounce back and forth across the stage and B-Boi standing front and center while spitting his rap like preacher turned politician. Big ass throwdown aided by the Goodie Mob toward the end of the nearly two-hour Armageddon. 'Course if hip-hop nation is gonna demand gladiatorial spectacles of this scope, it's gonna have to reconcile stripped-down mike checks like Ludacris versus arena-rock pacing where the hits come at the beginning and end, but when you can end your set with two of the dopest radio beats in recent memory, "Ms. Jackson" and "B.O.B," the dirty South calls the shots.