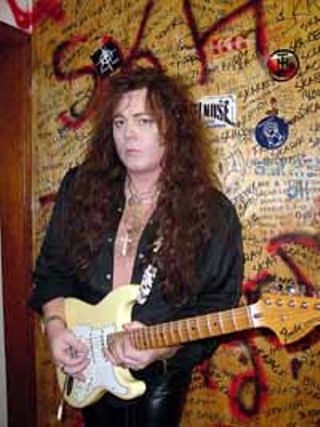 Yngwie Malmsteen nearly single-handedly brought breakneck speed guitar -- or shredding -- into existence in the Eighties. Cast in the mold of Hendrix and Deep Purple, seasoned with Western classical and baroque flavors, and cooked in the fire of supersonic fretboarding, the Swedish-born Miami resident is the High Priest of Big Hair Speed Metal; his highly burnished metal elicits a love-it-or-hate-it response. Dog Fashion Disco resided firmly in the second camp, mocking Malmsteen during their previous set. A fair segment of the crowd left after DFD's set, but was replenished with fans yelling "Let the shredding begin!" as roadies prepped the stage. "You fucking poseur!" was uttered as well. Once the dry ice smoked up the stage, Malmsteen began with "Rising Force," followed by the metal tour de force "Crucify" from his latest, War to End All Wars. Malmsteen's playing can be lyrical as well as lickety-split, yet he draws criticism because phrases rush by like a bullet train. Visually, the guitarist took a chapter from the Nigel Tufnel book of stage theatrics: fan-blown big hair, leather pants, and guitar acrobatics. It was high camp, both in the serious woodshedding sense, and in the campy sense, oftentimes becoming unintentionally ironic since Malmsteen sported four necklaces, a middle aged paunch, and what appeared to be make-up. While his guitar tech was busy tuning his boss' tools and keeping his frequently used beer glass full, Malmsteen kept to his superfast teeth-rattling metal, backed by a keyboards, drums, a vocalist cast in the Bruce Dickinson mold, and a two-octave bass. As his 50-minute set came to a close, Malmsteen played a healthy segment of Eddie Van Halen's "Eruption" with his teeth, then literally ripping the strings off of his scalloped fretboard signature Stratocaster, threw the instrument over his head where it sailed about 10 feet before crashing on the floor. Eschewing trends, in many respects Malmsteen is a living time capsule of mid-Eighties turbo metal. Love it or leave it, nobody does it better.