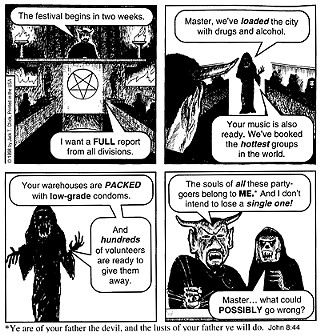 Back to the Old Grind

"It's midnight Sunday! South by Southwest is officially finished!" So yelled Paul Minor from the stage as the clock ticked over in the sweaty, jam-packed back room of the Hole in the Wall. Of course, there were still two more hours to go at this point, both for his Superego-ending re-enactment of The Last Waltz and for SXSW 2001 in general, so one has to assume his mind had simply gone into overload by that point. Dennis Quaid, apparently on a break from filming Disney's The Rookie, seemed to be enjoying the performance, anyhow (and sizing up the Austin audience before his own band plays Antone's on Monday and Tuesday?). Ivan Neville did a guest spot on keys for "The Weight," and Tony Scalzo was refused admittance at the door, but then again, he probably thought they were supposed to perform "The Way." Over at La Zona Rosa, Dr. Demento, fresh from spinning goofy greats at Antone's all afternoon after the traditional Sunday SXSW softball game was rained out, held court over the city's strangest tribute bands at the "Gods & Monsters Nude Revue III," which included the Dung Beatles ("Life is very short and there's no time for flushing and wiping, my friend") and the Diamond Smugglers, and introduced a surprise guest from Washington State. Said guest was 1997's top act from the Demento show, Dana Lyon, who performed a pair of acoustic novelties while Glamourpuss was setting up, and probably got gears spinning in the SXSW organizers' heads for doing a proper all-Dementia night at the fest next year if the Doc would care to return. If not, Demento did a great job of framing things at this year's SXSW, since Ray Davies began things on Wednesday with his keynote speech (and brief performance on the acoustic guitar he borrowed from Steve Collier) and one of the songs the Doc spun on Sunday was Weird Al Yankovic's Kinks parody "Yoda." Nice bookending job there, intentional or not!

The illustration on this page comes from a Jack T. Chick religious cartoon booklet, in case you've somehow managed to make it this far in life without having ever been handed one of Mr. Chick's wacky, paranoid funnybooks before. This year, just before SXSW, a few people involved caught wind of how cheap it is to order a literal bucketload of the things (www.chick.com), and thus the tracts were everywhere throughout the conference, being handed out (along with official Chronicle condoms!) to any and all who would take them. This particular four-panel sequence from "Party Girl" (order No. 099) reads like a summary of SXSW's detractors this year, but more to the point, it illustrates how assembling more than a week of intensely creative forces including 150 films and over 1,000 bands is hell on everybody involved. Also, add all the newsy bits from our daily issues, like ...Trail of Dead putting themselves in mortal danger, various and sundry Ozzy Osbourne sightings, and the APD vs. the Black Crowes audience, then throw in the gamut of Texas weather we ran through between Wednesday and Sunday, from sun to rain to clouds to cold to heat, and you're starting to get a good idea of the hugeness of the last week. SXSW Creative Director Brent Grulke says he thinks this year ran about average as far as community satisfaction goes, but I'm not so sure. I understand that local acts have their showcases confirmed last for the logical reason that they don't have to deal with arranging for travel. That makes perfect sense, but having been on the receiving end of both inane ranting and reasoned discourse from those who felt they were rooked in one way or another by the conference, I'd say that well-intentioned but flawed policies regarding the handling of locals, combined with the current shortage of appropriate performance spaces, led to some confusion this year among local bands who simply wanted to ensure they were playing somewhere during the all-important SXSW week. In the long run, though, I think the vast majority of performers miss the most important point of the week. Whether you're in SXSW or out, if you're expecting to gain something financial from the week's events, it's your own responsibility to build up a buzz for your band and ensure that interested industry types are eager to see you during their visit wherever and whenever you're performing. If you haven't done that beforehand, you're playing for one reason and one reason only -- to have fun. And if you find yourself spending the entire month of March walking around with steam coming out of your ears, you're definitely not having what most people would call a good time. Within the organization, a weary Grulke said on Monday that SXSW 2001 "by and large, from our end, went well. The more important question, though, is how it went for the bands that were here." As the weeks progress, look for the answer(s) to that question upcoming in this space.

Strange coincidences that apparently had nothing to do with SXSW led to an overflow of Austin music getting attention on national TV and radio last week. There was Conan O'Brien's rendition of Fastball's "The Way" on his Late Night show last week, and then on Monday, radio righty Rush Limbaugh was heard giving his review of 81/2 Souvenirs, declaring that he had been receiving "e-mails by the droves" from disgruntled Souvs fans since he had begun playing Paulo Conte's version of "Happy Feet" rather than the Austin combo's. In a side-by-side listen to the two versions, Limbaugh was heard to compare the Souvs' take on the song to Mr. Rogers and the Muppets before declaring, "You lose all credibility with me when you put a kazoo in your song." (I'm predicting a marked increase in kazoo use by Austin artists in upcoming months.) He further called the Souv's version "amateurish," rightly mocked their fans for not knowing whether the band was singing in French or Italian, and insisted that those who preferred their version must be "Napster-lovers" who liked it only because it downloaded faster. In the end, while he claimed to have no personal dislike for the Souvs, El Rushbo's final decision was that the Conte version was "hands down" the winner. Before you start using Limbaugh as your own musical litmus test, however, keep in mind that this is the same fellow who once claimed to have thrown Gibby Haynes out of the audience of his syndicated TV show for being dressed inappropriately and "consuming adult beverages."

I have no idea what Rush Limbaugh would think of the Ging'bredmen, but he'd probably be prejudiced when he realized that drummer Rob Kidd also plays with the Souvs. Whatever your politics are, check out the reunion show for the Gings at Antone's next Thursday, with Kevin McKinney and the Grooveline Horns joining in the fun, as Gingster Henry Guitierrez's return from New York facilitates the band's first gig in five years… The longest celebrity roll call for the week seems to have been at the controversial Revolver party on Saturday featuring the Cult (who sold out a paid show the next night at Stubb's as well!). In attendance at the party were the aforementioned Dennis Quaid, the guys from Hanson, Nikki Sixx, Pennie Lane, and Jeff Buckley's mum (who is presumably also Tim Buckley's widow). The partying never really ends in Austin, even for the young 'uns, so look for a street carnival from 2-5pm Saturday in honor of one of Austin's best guitar-slinging movie directors, Robert Rodriguez, and his new flick Spy Kids. That's outside the Paramount, with a premiere screening to follow. And with a sequel already green-lighted, they'll have a drawing for a cameo in the next film at the premiere. As far as carnivals for adults, check this space next week for information on May's "Electric Daisy Carnival," which Noah Ark promises will be even bigger than the "Airport 2" party… How did the influx of people over the last week affect record sales? Well, the top three sellers at Waterloo Records this week were Bob Schneider with a whopping 1,313 copies (no wonder they had to hide Sandra Bullock behind a wall of folding chairs at the Music Awards last Wednesday), followed by Los Super Seven with 297, and Jimmy LaFave moving 256… Lucinda Williams is changing the name of her album from Essence to Broken Butterflies. Expect Williams to return to play Austin at Antone's in late April just before her Jazz Fest gig. During Lu's stay at the San José, Annie Leibovitz photographed her for two different sessions, including one for Vanity Fair… If you didn't make it to the True Believers reunion on Sunday, don't worry -- neither did Javier Escovedo. That particular E. brother couldn't make the time in his schedule for the show, unfortunately, but things could've been worse. Leaving from Maria's Taco X-Press, where big brother Alejandro was playing, littlest Escovedo Mario and his band the Dragons were almost seriously harmed Saturday evening when a vehicle ran a red light and slammed into their van. Luckily, all the van's occupants escaped unscathed… First in with a detailed report of their non-SXSW week of activities is the Saxon Pub, where notable occurrences included Ian McLagan's sold-out show Wednesday being filmed by the BBC to be shown in the UK next week. On Thursday, songwriter Bobby Boyd presented the Saxon with an award signifying 30 million copies of his song "Two of a Kind (Working on a Full House)," as recorded by Garth Brooks, for permanent display at the Pub. On Friday, the crowd for the midnight show was treated to Delbert McClinton joining Stephen Bruton on stage for a 45-minute set doing Delbert songs from the past and cuts from his new album. Sunday, Jimmie Vaughan and Lazy Lester joined Lou Ann Barton, Derek O'Brien, Preston Hubbard, and George Raines for a 75-minute set. By the way, Monday was Vaughan's 50th birthday, which was celebrated with a party at Antone's… Jo Carol Pierce and former Timbuk 3er Barbara K will perform sets at an afternoon benefit on Sunday at the Clay Pit restaurant, lending their talents to an environmental project championed by Clean-Nepal, an Austin- and Kathmandu-based nonprofit organization… One Betty Ritter from West Virginia tells "Dancing," "I firmly believe that the Sir Douglas Quintet needs to be inducted into the Rock & Roll Hall of Fame," so she's created an online petition to help achieve that goal. Those interested in signing can check it out at www.petitiononline.com/sdq/petition.html. Hey, if even the Texas House of Representatives can sit up and take notice to the music of Doug Sahm, as it did with an official Sahm Resolution last Thursday, the folks at the Cleveland home of rock & roll ought to be pushovers for the idea… Stickpony has a release party today (Thursday) at the Hole in the Wall for their new live album Texas Tabloid, with the Danged and the Dukanes also on the bill. And here I thought "Texas tabloid" was what you get when Jenna Bush starts showing up on the cover of the National Enquirer…