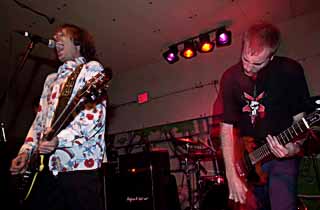 If 90% of everything is crap, then the Spiders are on the cusp of falling into that 10%; or, as a former rock star said to me on his way out half-way though the showcase: "The description was better than the execution." That description could be a plethora of things. Devo crossed with Louder Than Love-era Soundgarden. Introduce Yourself-era Faith No More sans the cheesy synth parts. Or even something akin to the second Cult record and the old Cruz bands -- All and Big Drill Car -- only with balls. And there is definitely an element of cock rock. Even better is that it's sexier than it is pornographic. It's big and loud and kinda dumb, but rarely overbearing. Also on the plus side, the local fourpiece did a fairly remarkable job of not staying on one note, bouncing from an almost goofy, kitschy song like "Terrorism" ("He's got so many boyfriends/He doesn't know what to do with them") to the set's penultimate song and its "Stranglehold"-esque break. Brilliant. Moreover, guitarist Eric Shaw's leads were perfectly economical and never strayed into the realm of the self-indulgent Seventies. But as tongue in cheek as the band can be, on a song like on "Virginity," singer and guitarist Christopher Benedict's penchant for throwing falsetto jumps into the vocals got old quick. It stacked up so much that halfway through the set it was damn near annoying. Still, it's hard not to like a band with somewhat mindless lyrics about chicks, cars, and well, stuff. Rock & roll is usually at its best when it's not too self-aware and not too heady. Plus, it's even harder not to like a band that can just turn it up and let fly with thick, fat, warm guitar rock that crosses Paranoid with a more-than-slight New Wave undercurrent. But for all that, there was something lacking from the set beyond the dearth of originality. After all, how much these days is wholly original? Whatever the requisite "it" is, the Spiders were just short. Too bad, because they've got the tools, some damn catchy songs (if not much knack for melody), and just enough swagger to be cool. If only they could make the execution as good as the description.