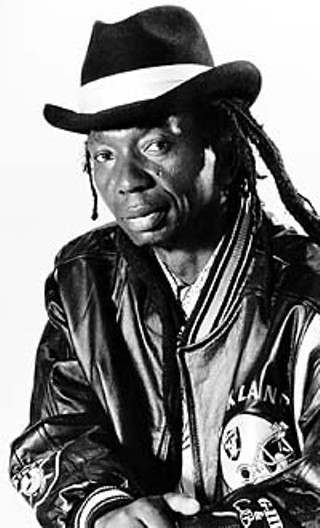 One of the highlights of Thomas Mapfumo's long, illustrious career was playing with Bob Marley as his homeland gained independence from England's colonial rule and Rhodesia became Zimbabwe in 1980. It's been a rocky road for the troubled nation ever since, first and current ruler Robert Mugabe leading the nation into a hell of corruption and social indifference.

Like his only peers, Marley and Nigeria's late Fela Kuti, Mapfumo is the voice of the commoner, and he's not afraid to point out injustice wherever its nasty head rears.

"The ruling party in Zimbabwe wants to harass everyone who is not supportive of the government," says Mapfumo, currently touring the States, by cell phone. "You cannot support a wrong system, that's not good. Everyone is suffering now."

Due to his adamant stance as a political artist, the Lion of Zimbabwe (as he is often called) has the dubious honor of having his songs banned by both the corrupt colonial government and the corrupt current government. When asked if he thinks the government's ban is their yellow-bellied way of striking back for his political critique in songs like "Disaster" and "Mamvemve (Tattered Rags)," the Lion is blunt.

Mapfumo is currently on a productive streak, releasing a handful of choice albums on aNOnym reCOrds in recent years. His latest, Dreams and Secrets, finds Mapfumo teaming up with avant-jazz mandarin Wadada Leo Smith and his group N'Da Kulture. Mapfumo describes in simple terms how the working relationship with the trumpeter bloomed.

"We got together and he came up with some ideas, and then I put my own ideas with them."

The results are like nothing the planet has ever heard, thumb piano-driven Zimbabwean polyrhythms blended with avant-jazz melodicism. African and African-American music, across time and space.

Given that Mapfumo's SXSW showcase is the only place he will perform with the same group that recorded Dreams and Secrets, his appearance in Austin is already a distinguished one. That David Byrne personally requested Mapfumo's set be moved next to his only makes it more so.

Including "Everything's Big in America," from Dreams and Secrets?