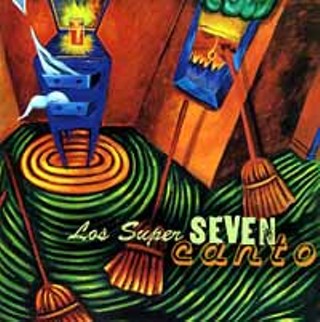 There's mucho to be said for the sophomore effort that makes its previously model predecessor lose some of its luster. Following up 1998's self-titled and savory all-star Tex-Mex Paella, chock-full of David Hidalgo and Cesar Rosas, Freddy Fender, Flaco Jimenez, Ruben Ramos, Joe Ely, and Rick Trevino (not to mention a supporting appearance by Doug Sahm), Canto is an altogether better dish -- better song. For starters, nearly all the vocals are in Spanish, none as jarring as Ely's Woody Guthrie ode, "Plane Wreck at Los Gatos ("Deportee"), on Los Super Seven. Gone are Fender, Jimenez, and sadly, Sahm, but replacements Raul Malo from the Mavericks, and South American superstars Caetano Veloso and Susana Baca more than take up the slack. Veloso's Portuguese lilt is a bit odd in the mix, but set-ender "Baby" is endearing. Baca, for her part, makes the point that more señoritas are needed at this fiesta, her mothering vocal a lullaby on "Drumi Mobila." Malo pretty much steals the show with his deep, rich take on "Siboney," which glides on a Latin Playboys-esque bed of percussion, while "Me Voy Pa'l Pueblo" is arguably the best track on Canto, with Ruben Ramos' harmonies as integral to the song as the rest of the LP. Rick Trevino, smooth and confident with the sexy samba of "El Que Siembra Su Maiz," is obviously ready for his own album of traditional fare, and Hidalgo and Rosas shine as they have on every Los Lobos tune they ever recorded. Obviously aimed at fans of the Buena Vista Social Club, Canto's catalog of Mexican roots music hits a lot closer to home. Mi casa, su casa. (Thursday, March 15, La Zona Rosa, 11pm)