I Am the World Trade Center, Emo's Jr, Wednesday 14 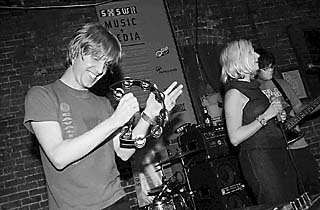 Last year, the Brooklyn-based synth dance duo of Amy Dykes and Dan Geller were invited to perform at SXSW based almost entirely upon their laptop computer-created debut recording, Out of the Loop. It probably didn't hurt that Geller is co-founder of conference fave Kindercore Records. The young band (at the time a quartet) did a respectable job, especially given that it was their first gig. Ever. Performing on the same stage as they did last year, the now trio (augmented by a bassist sitting in from Just Be Friends) played to a more dense crowd than last year. While it was strange that well before 10pm on the conference's first night the place was so crowded, it was even more odd that the place had filled out for such a tiny marquee band on the smaller stage at Emo's. In spite of their size, the audience was simultaneously attentive and indifferent, most likely the result of the interesting pulses and sounds coupled with a decidedly diagrammatical stage presence. Their short set began with a bold and creative sampled beat, then into Dykes' slightly Debra Harry-like vocal cadence. Geller worked the digital manipulation and occasional tambourine, and the bassist added a needed analog touch. Their mostly three-minute original pop songs are a mix of Eighties synth couched in a modern digital dance aesthetic, punctuated with sampled spoken words, Pac Man tones, and xylophone runs. About halfway into their set came a better-than-last-year version of "Aurora Borealis" from their debut, but their closer, a new percolating noisy experimental number, came off best. With a new album due out in a few months, it's clear that the band has been busy in the last year. Even if they weren't working on their singing and live show. Maybe next year.