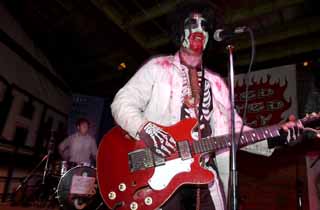 Q. What happened to Eddie Cochran after he died in that car wreck?

A. He lay around in the grave for 40 years, got possessed by Satan, and came back as Hillbilly Werewolf.

Scottie Mominee, fondly remembered from his Phantom Creeps days, proves that you don't really need a bass player at all if you make enough noise with a guitar and drums. Solos? Pshaw. Finesse? Fiddle-faddle. The Werewolf has all the finesse and nuance of a mule kicking down a barn door. Decked out in a fright wig, skeleton suit, zombie make-up, blood-spattered lab coat, Billy Bob teeth, and sporting a noose around his neck, the Werewolf pounded out three-chord rockabilly reduced to its chord-and-a-half basics. "You set 'em up and I'll by-God knock 'em down," he announced, and damned if he didn't do just that. There's a place where ghoul-rockers drive in their bucket-T hot rods and rattle their bones down at the graveyard until daylight; a place where all the drummers play stomp-beat and all the songs are in E, a place where Gene Vincent of the Living Dead flogs a guitar and wails about whiskey and wild, wild women. And there's a brand of rock primitivism that goes along with guys like Hasil Adkins, Screamin' Jay Hawkins, and the Legendary Stardust Cowboy; Hillbilly Werewolf mixes it with B-movie terror and sits squarely beside them to chug a bottle of Old Grand-Dad and howl at the moon. The only song even faintly recognizable among the wreckage of tunes about night trains and empty graves was a version of Roy Orbison's "Rock House," but it didn't matter any more than the absence of a bass player. It all wound up with the Werewolf climbing up on the drum riser, jumping off, and landing squarely on his back on the stage, then hoisting that red guitar over his head and threatening to kick everyone in the audience's ass. The Flat Duo Jets don't have a bass player either, but Hillbilly Werewolf's whoopin' and a-hollerin' would have Dexter Romweber and company shaking like Jell-0 in their vintage slacks and lying awake in mortal fear of the boogey man for nights on end.