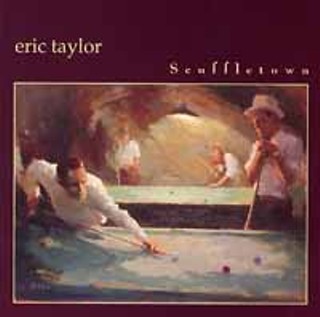 With a voice like old leather, saturated with long years of smoke and tears but only getting better with time, Texas songsmith Eric Taylor loads his latest release Scuffletown with about as much dark emotion and as many unwelcome ghosts as a single album can handle. Though it starts off on what seems like a nice, nostalgic enough note on "Happy Endings," there's a hidden subtext going on -- no, things are not what they may seem -- that's maintained to differing degrees throughout Scuffletown. Where the mournful "Blues Piano" is an ode to the power of music, the rest of Scuffletown is a stretch of dour songs full of unfaithful women and murderous men, all set against a gorgeous wash of acoustic guitar and subdued arrangements of drum-bass-keys-background vocals. Even a trip to see Charlie Rich sing in "All the Way to Heaven," turns out, it seems, to be the scene of a killing. Outcasts and others trodden by the day to day search for a place of melancholic fantasy are resigned to fate in Scuffletown. The album ends with a series of particularly powerful songs, as "Your God" questions historical cruelty in the name of religion, "Bread and Wine" puts words into the mouth of Christ at the Last Supper, and "Game is Gone" in effect picks up where the Stones' "Sympathy for the Devil" left off, following that darker deity through history. In the end, the entire album is brought together through the words of Townes Van Zandt, in his "Nothin'," with an electric guitar wailing like a specter in the distance: "Echoes strummed from pure temptation, sorrow and solitude, these are the precious things, and the only words that are worth rememberin' anyway." (Saturday, March 17, the Hideout, 9pm)