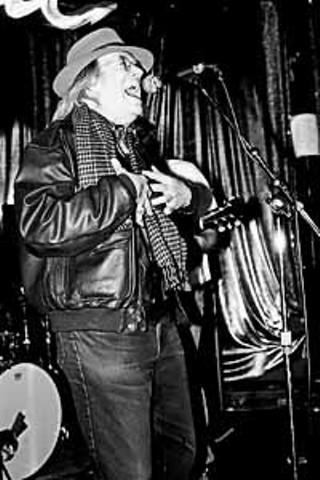 Doug Sahm at the Electric Lounge, 1999 (Photo By John Carrico)

It's South by Southwest week again, isn't it? Whew. Which means it's also St. Patrick's Day week. And Spring Break week. And Rodeo week. And Austin Record Convention week. And so on, and so on. And as usual, a few things are still in last-minute flux at SXSW Headquarters (no, that doesn't mean Yoko Ono's decided to do a showcase). Saturday evening's free outdoor show at Waterloo Park finally has its headliner in the person of popmeister Matthew Sweet, who, along with Bobby Bare Jr., will form the second half of the free public concert that starts with local jam band Larry at 4:30pm and Philly electro-jammers Disco Biscuits at 5:30pm. Between the issue you hold in your hands right now and our daily supplements starting Thursday and continuing through Sunday, we're trying our best to ensure that those of you polite enough to visit (and not move here) get complete coverage of all things both SXSW and non-SXSW for the week. For the exhaustive list of public, mostly no-cover affairs outside of SXSW jurisdiction, turn now to our City Beat listings for afterhours bashes and non- or anti-Fest shindigs, or head to the Music Recommended page for loads of in-store band appearances and daytime parties.

If you don't have the time or energy to attend SXSW events like Stephen Malkmus of Pavement at the Austin Music Hall (Saturday, 12:45am) or anti-SXSW soirees like the Monsters of Mullet at the Flamingo Cantina with Sinis, Ignorance Park, Broken Teeth and 10 others (Saturday, noon-2am), plan to be bombarded from all sides with SXSW week via radio and television. Besides national coverage from MTV, VH1, and the like, all the local TV channels will be swimming in local music during their usual news schedules (judging from the promos running so far, we're especially hoping for good things from KNVA 54/cable channel 12). Meanwhile, over at 24-hour local cable news station News 8 Austin, the Chronicle's own non-mullet-wearing Andy Langer will be handling live coverage and interview segments with additional reporting from Eileen Gonzalez. News 8 will be reporting live from registration, Ray Davies' keynote speech, the trade show each day, Waterloo park each evening, and Stubb's each night. "This is the kind of event that a 24-hour station thrives on," says Langer as he steels himself for the ordeal. Look also for Langer's "The Insider" feature in our Daily Chronicle.

KROX-FM (aka101X, 101.5), meanwhile, is running Langer's Hometown Heroes segments throughout the conference, playing a bio sketch and song from a different local artist each day, including previews of both the upcoming Riddlin' Kids and Davíd Garza albums, plus featured acts Bob Schneider, Spoon, Dewato, Silver Scooter, Subset, and more. 101X's Ben Blaze will also be providing SXSW updates all through the week.

Public radio station KUT-FM (90.5) will be hosting a number of musical acts, notably on the Eklektikos program, including the Waistcoats today (Thursday) at 11am, Louise Hoffsten & Henning Kvitnes at noon, the Groobees at 1am; and on Friday, Project Karpaty Magiczne at 11am and Lazy Sunday Dream at noon. Meanwhile, over at UT's "actual" student radio station, KVRX-FM (91.7), there'll be loads of bands taping performances in the afternoons and evenings to be run later in the day. The times listed here are iffy at best, so tune in for better info: Thursday check out Japancakes (8pm), Pepe Deluxé (9pm), and Jurassic 5, Black Eyed Peas, and 4th Avenue Jones (beginning at 1am); Friday listen for Mercova (8pm), Calla (10pm), and Lift to Experience (midnight); Saturday dig on DJ Accucrack (11pm), Idlewild (midnight), Arlo (1am), Black Halos (2am), and the Lisa Marr Experiment (3am); and on Sunday open your ears for Array Gun (10pm), Kid 606 (11pm), Ecstasy of St. Theresa (midnight), and Free Radicals (1am).

If you haven't already heeded last week's advice to call the Austin Music Network at 451-8445 to get your videos on the air during SXSW, you still have a chance. In fact, AMN's Woody Roberts says that the station (viewable on Austin cable channel 15) is practically set up like a drive-through restaurant this week. Anyone from any musical act, local or visiting, can pop by AMN, located in the Threadgill's restaurant at 6416 N. Lamar, bring in their music video, and have it beamed out into 265,000 homes. If you came to town with your only copy and are afraid of losing it, well, Roberts says, "We will not accept a tape [an artist] can't afford to lose -- in that case, we'll walk you in and play it, and once it's run you can take it back and leave." The station can play pretty much all formats of video. They won't just be sitting in the control booth all week playing walk-in videos, however. Roberts says this week marks the largest number of shoots the oft-troubled station has ever attempted in one week. Following months of survival-level existence of running nothing but existing material from the station's library, earlier this week they began a flurry of taping that will encompass somewhere between 50 and 60 performers. You can find ads containing their schedules in the Chronicle's daily issues, or keep this handy comprehensive guide by your side.

Roberts also reports positive feedback to the station's first airing of a feature film, the local punks and drugs epic Rock Opera, on Tuesday. Despite initial nervousness over the numerous four-letter words in the film, Roberts says the response has "paved the way for more" music-related movies (not four-letter words). As for the newly taped material listed above, Roberts says that AMN will begin running the raw footage as soon as possible after each shoot. "We're gonna shoot it, bring it back, and air it as fast as we can!" before prettying it up for future showings.

Here's a quick Austin update for those visitors wondering what's going on these days. Why is downtown a hideous eyesore, you ask? That would be because the city decided to bend over forwards for the dot-com revolution and tear down several blocks' worth of buildings, including legendary music venue Liberty Lunch, in order to build office and living space for the faceless denizens of several high tech firms. In a gesture of thanks, said companies have since announced that they can't necessarily use or afford all the buildings and will leave some unfinished and others unoccupied. Newcomers will, however, continue to buy up all the cool party houses in Central Austin and force all the old-Austin type renters out to the suburbs while still managing to clog our streets to a near standstill for four or five hours each day. If that's not a poor enough state of affairs for the "Live Music Capital of the World," the news came in last week that Texas state Sen. Gonzalo Barrientos, D-Austin, had been approached by the Austin Police Department and the Austin Downtown Alliance to sponsor a bill banning anyone under the age of 21 from entering nightclubs. You won't read much about it, though, because before we went to press, Barrientos' Friday deadline for a response had come and gone, and the senator had opted not to file the bill. In a brief mention of the matter, Saturday's American-Statesman quoted Barrientos' spokeswoman Rachel Smith as saying that "the phone was ringing off the hook" regarding the would-be bill, and among the input from concerned citizens, "we did not get one constituent phone call to support it." Still, the fact that the matter came up at all should send chills up the spine of anyone in the local music community. A Barrientos spokesperson said he didn't think it was likely the bill would rear its ugly head again soon, but added that he couldn't completely rule out the possibility.

The Doug Days of Spring

On a positive note, Shawn Sahm reports that the House of Representatives has had one of its, well, representatives get in touch with him about honoring his late father Doug Sahm today (Thursday). "They even wanna have an official Doug Sahm Day!" says Shawn. "Man, would Pop dig that!" Actually, it's a two-in-one deal, with Rep. Trey Martinez Fischer introducing a memorial resolution for Sir Doug, who passed away from a heart condition in late 1999, and Representative Barry Telford simultaneously bringing up a resolution honoring Sahm's band the Texas Tornados. Along with sons Shawn and Shandon Sahm and other family members, Fischer's assistant said at press time that several of the surviving Tornados were expected to attend the ceremony. Shawn Sahm has been in L.A. mixing his own latest musical project, which he describes as being "100% my family roots, i.e., no metal, no rap, no 'yo bitch,' just good ole Texas/Sahm family rock & roll Tex-Mex!" All of the "gang" played on the album, says Shawn, including Sahm Sr.'s Tornados pals Flaco Jimenez and Augie Meyers. Look for that soon. And for exclusive Doug footage tonight on AMN.