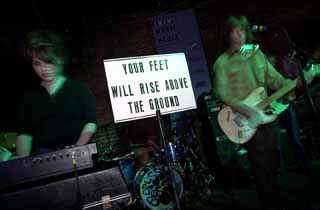 Though Athens, Ga.'s Kindercore Records is certainly one of the hippest indie labels showcasing their wares at SXSW, Emo's wouldn't normally be the best venue for such a display. Despite the club's formidable and long-standing status as Austin's premier watering hole for underground touring bands, Kindercore's roster tends toward the kinder, gentler side of indie rock. This is especially true of Vancouver's Ashley Park. The group is the brainchild of Terry Miles, a multitalented Anglophile pop composer who played virtually every instrument on Ashley Park's effervescent 2000 debut, Town and Country. Miles' work may be somewhat derivative of cultish Sixties touchstones like the Kinks' Village Green Preservation Society, but with slightly under-the-radar influences like that, no one is likely to call him on it. The lilting, narrative-driven nature of Ashley Park's performance required a relaxed, low-key decorum more akin to a coffee shop than a loud rock club. Fortunately, the audience was willing to do its part, keeping idle jabber and bottle-clanking to a relative minimum. This allowed Miles and his three compatriots to deliver intimate yet wonderfully airy renditions of album highlights such as "Lucy and the Bourgeoisie" (easily one of the best song titles this side of "Bennie and the Jets"). Ashley Park also broke out "The Painter and the Jail," their contribution to last year's three-disc Kindercore 50 compilation. That song was percussively augmented by a manual typewriter, a tiny stroke of genius that kept the overall vibe light and fun. Not since Lester Bangs dragged his typewriter onstage with the J. Geils Band has this tool of commerce been used to such playful effect. Despite Ashley Park's ability to perform quiet, cinematic pop songs with a degree of levity, one would hate to see the catchall appellation of "twee" applied to them. There's nothing cloying or saccharine about Miles' songwriting; if anything, he revels in a retrospective maturity with spiritual ties to the Beatles' attempt at reconstructing the Liverpool of their childhood on "Penny Lane" and "Strawberry Fields Forever." Accordingly, Emo's was awash in the melancholy tones of Fender Rhodes piano and synthesized Epiphone. This was especially true on the all-encompassing "The Last Day in the Life of Grand," a song the band was playing live for the first time. While less nuance-focused artists might be flustered by a loud room like Emo's, Ashley Park's 35-minute set was an exercise in artful crowd control.