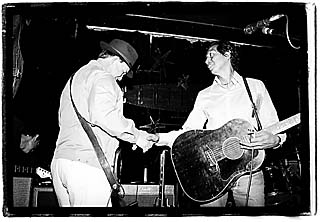 It wasn't quite up to the headline-making potential of the Austin Police Department's overreaction on the Saturday night of this year's Mardi Gras, which many say was the trigger that set off riots that left numerous people injured and 35 arrested, but the APD didn't make any new friends at the Black Crowes showcase on Friday night at Stubb's. Reportedly, the police went ballistic after smelling (gasp!) marijuana smoke in the air at the show and barged into the crowd and started yanking out patrons left and right. Luckily, Chronicle Music Editor Raoul Hernandez, who was thrown out of the Atomic Cafe for lighting up a reefer during last year's SXSW Black Kali Ma show, was too busy to attend the Crowes' performance. Even luckier, his girlfriend, who was there, didn't take the doobage that was offered to her just before the raid. In any case, let me get this straight, now: These are cops who are supposedly trained in how to deal with large gatherings of people, and they're thrown off guard by finding out that people are smoking pot at a Black Crowes show in Austin??? I'll bet they were really surprised a while back to realize that the prominent politician's daughter who was driving at 60mph in reverse past the APD station house was drunk! Important advice to the city officials: It's time to (a) teach cops who are assigned to the entertainment district exactly how to deal with the idiosyncrasies of that particular beat, and (b) once they know what they're doing, get rid of that ridiculous policy of rotating squads around town -- keep the cops who are properly trained in the area where they've been trained to work!

And You Will Know Us by the Trail of Drums ...

Apart from the over-eager officers discussed above, this year's SXSW is one of the smoother ones in recent memory. You wouldn't have known that from the antics of ...And You Will Know Us by the Trail of Dead at the Red Eyed Fly on Friday night. The Trail guys were bound and determined to mix it up as usual, and one doorman at the club says things nearly turned very ugly. Apparently, the usually troublesome singer was reasonably well-behaved, but the band's drummer began tearing down the banners that SXSW and the club had put up behind the somewhat precariously perched hillside stage. Encouraged by the reaction, he then chucked his bass drum over the cliff and into the raging sludge of Waller Creek below. "I love it when bands go nuts like that, so I was thinking 'This is great!'" says the Fly guy." Then I remembered, 'Hey, wait a minute! I work here!'" He says at that point he ran and stopped the drummer from tossing his floor tom (and next, possibly, himself) over the precipice. "I was really worried about him losing it off the back of the stage," he recalls. "That's a long, rocky drop!" Note to the Trail of Dead guys: Next time, save it for the UK papers -- you know how they eat that stuff up.

Takin' It to the Streets

There have been some other hang-ups, of course, like the last-minute cancellation of the Brian Jonestown Massacre, who apparently found it unfeasible to make the trip for a single show at the Hole in the Wall… On a lighter note, SXSW and Emo's employees were seen Saturday afternoon loading case after case of Wesley Willis' equipment into the street as they tried to figure where they could store it before the evening's bands loaded in. Apparently, the mentally "specially abled" performer had forgotten to take the gear with him after his band performed their Friday night set at the club. A weary Dave Thomson was heard to grumble, "Whatever happened to him just playing a *@!!*%! Casio?"… One interesting potential scandal was dispelled quickly at the SXSW Trade Show. After the big winner of the Jagermeister booth's guitar giveaway was announced as one Shannon Swenson, SXSW big boss Roland Swenson told "Dancing About Architecture" that he was not aware of anyone named Shannon in his immediate family. "If she's from Texas, though, we're probably related in some way," he admitted… I don't believe Ozzy Osbourne was at the Convention Center, but it's a damn shame he wasn't. Wife/manager Sharon Osbourne's panel ran concurrently with one entitled "The Word on Christian Rock," and I would've loved to have seen the reaction if the Ozz had been directed to the wrong room… Our buddy Johnny Walker reports that he talked to Waylon Jennings at the Stargunn gig at the Drink on Friday night, and says the country outlaw icon was leaning on the bar, smiling broadly, and having a generally fine time. The reason for the smile was probably the fact that Stargunn is Jennings' son's band, and they were doing a good job onstage. Mr. Walker also attended this year's Black Kali Ma SXSW showcase, but since he wasn't in the company of Raoul Hernandez (as he was last year), he didn't have any trouble… A party Saturday afternoon at Lovejoy's introduced the Monkey Boy Sampler Version 1.1, with delicious servings of Tuna Helpers, Gravy Boat, Lone Pig, and a load of bands who don't sound like menu items, including Toof, Drunken Thunder, Men From Nantucket, and Litter Meet. The gathering also served to gather funds for Voltage's Joe Emerick, who recently had his appendix and several yards of giblets removed… The all-star take of "The Rain Won't Help You When It's Over" at this year's Austin Music Awards was a mere sampling of the True Believers, with the full-on reunion set for tonight, the first since Ryko got the gang together in 1994. Still no word on whether they found preferred drummer Rey Washam. I do know that as of a few days ago, Keith Carnes said he still hadn't gotten a call… Also tonight, a farewell to Paul Minor and Superego as kings of Sunday nights at the Hole in the Wall. In addition to the cast listed elsewhere for the reenactment of The Last Waltz, Minor says he's tied the loose ends up with Walter Traggert as Van Morrison, the Stingers as Eric Clapton and band, and mannish boy Jeff Smith as Muddy Waters… I continue hearing good words about the first music that many visitors to SXSW hear -- the showcases at Bergstrom Airport. Some performers on the runway stage have found themselves interrupted mid-song by announcements that someone has had the nerve to park in the White Zone, but hey, any professional knows that at that point they should simply segue into an impromptu rendition of Frank Zappa's "Joe's Garage"… Rain venue for the annual badges-only softball game will be Antone's, where there'll be beer, barbecue, whiffleball, and possibly Dr. Demento spinning records about baseball. If you can't figure out whether it's raining or not, call the SXSW office (467-7979) or check their Web site (