HIP HOP HUMPDAY: Making this SXSW edition of Austin's best weekly party extra special super duper funky are Austin's Mr. Resistor, Trio D-Force, and HairyApesBMX, plus Chicago guests the J. Davis Trio. Plans call for Austin's multifarious Humpday unit to do a one-hour set of knee-deep freestyling, then move on to solo turns from the likes of Bavu Blakes, Tee Double, and Tray God. Now non-locals will see why some of us are always so tired Thursday mornings. (The Mercury, 8pm-midnight) -- Christopher Gray GETMUSIC.COM PRESENTS SCRATCH: This DJ showcase celebrating the SXSW screening of Scratch features no less than the style's inventor, NYC's Grand Wizard Theodore, demonstrating why they call it scratch. Also scheduled for some premium slice 'n' dice are Jazzy Jay, Phoenix's Z-Trip, Jurassic 5 waxman Nu-Mark, and honorary Austinite Mix Master Mike. Hosted by Rakka from Dilated Peoples. (La Zona Rosa, 9pm-1am) -- Christopher Gray SEXY FINGER CHAMPS: It's not the costumes. Austin's Sexy Finger Champs rank up there with P-Funk and GWAR in the stagewear department, but the real grabber is their irresistibly blithe power-punk. A brisk updating of D-Day's lost Eighties classic "Too Young to Date" was only one reason to love last year's Trash Hits the Rock. The cover was another, but really, it's not the costumes. (Maggie Mae's, 9pm) -- Christopher Gray OKKERVIL RIVER: Austin trio Okkervil River take old-time music from the hills and the hollers to new acoustic intensity and a whole 'nother level of creepiness. Their debut, Stars Too Small to Use, was a remarkable mix of frenetic stringwork and smart, narrative lyrics, the songs a constant challenge to the senses and sensibilities of the attentive. And they kick ass live. (Waterloo Brewing Co., 9pm) -- Christopher Hess

GRAND CHAMPEEN: Y2K's Out Front by the Van was not only one of the most vital independent Austin rock albums since Prescott Curlywolf's 300 two-track marvel Funanimal World, but also perhaps one of the best-ever attempts to knock off Soul Asylum's Made to Broken by a local band. Expect more of the same from the local quartet's brand-new follow-up. (Waterloo Brewing Co., 10pm) -- Michael Bertin

HUEVOS RANCHEROS: For the better part of a decade, landlocked Calgary has emerged as Surf City, Canada, on the strength of this trio's infectious all-instrumental sound, updated on the band's new Mint Records LP, Muerte del Toro. In their home and native land, they're legendary for such stunts as playing in a beer commercial fronted by Don Ho. (The Drink on 6th, 10pm) -- Phil West MIKE NICOLAI AND OTHER MEN CONFESS: Singer-songwriter Mike Nicolai has recently re-relocated from Seattle back to Austin, and are we glad and lucky to have him. His new solo release, Woody Allen Stunt Footage, has more than just a killer title -- the native Midwesterner's nimble guitar work and sharp, bitingly humorous perspective are set to some of the best songs he's written to date. And that's saying something. (Pecan Street Ale House, 10pm) -- Christopher Hess FIVEHEAD: Austin quartet Fivehead have grown into one of the surest indie-rock things going. Guitarist Beaty Wilson's songwriting has continued to grow, complementing John Hunt's stellar catalog and cementing the group's locomotive dynamic to a solid pop foundation. (Downstairs at the Loft, 11pm) -- Christopher Hess RUBINCHIK'S YIDDISHE BAND: Bad Liver tuba player and bassist Mark Rubin's klezmer and Eastern European folk-music group. Despite a slew of personal changes over five years, one thing is a constant -- excellent musicianship delivered with an honest spirit of fun. These days, Rubinchik's features the deep talents of accordionist Don Weeda and clarinetist Ben Saffer, but when the band hops onstage, anything could happen. (Ruta Maya, 11pm) -- David Lynch DRIVE-BY TRUCKERS: The Drive-By Truckers of Athens, Ga., play "effortlessly authentic roots-punk that's tasty as a pulled-pork sandwich," says The New York Times. Their latest release, live collection Alabama Ass Whuppin', goes a long way to prove that not only are these guys the redneck-rock champs of the moment, they also write songs that'll tear your heart out. (The Metro, 11pm) -- Jim Caligiuri 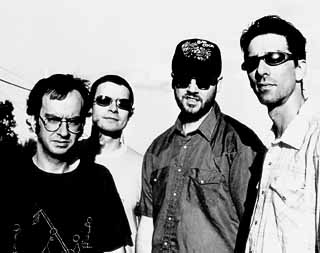 PEENBEETS: Being a geek was never this much fun in high school. But with Austin's Peenbeets, it's like Devo for happy kids. In our so-called lives, Greg Beets et al. represent the smart-asses, AV freaks, and asthma survivors' ultimate triumph in the arena of cool. Cozier than Cheap Trick, ballsier than a boy band, it's a wonder they're not on Comedy Central by now. (Maggie Mae's, 11pm) -- Christopher Gray

SHANE BARTELL: Attention publishers! If you're looking for the song that will pay for the yacht, the summer home, and the new car, hit this showcase. Local boy Bartell is a pop songwriter who so assiduously avoids "Rock," he's practically Neil Diamond. And he's written the tune that smells like money. Snap him up. (Pecan St. Ale House, midnight) -- Mindy LaBernz

THA LIKS: On albums like Likwidation, L.A.'s Alkaholiks intoxicated the hip-hop underground with 80-proof rhymes and beats backpackers and ballers alike could bounce to. Their name may be a shade more PC these days, but recent activity (like a guest shot on Dilated Peoples' The Platform) suggests these loopy lyricists are still very much leading the lush life. (The Metro, midnight) -- Christopher Gray DEATHRAY DAVIES: No relation to the Kinks frontman, the Deathray Davies are the crown jewel of Dallas' Idol records. Last year's The Return of the Drunk Ventriloquist is semi-lo-fi garage-pop perfection that left area critics at no loss for words. The Davies are among the leading candidates to jump ship to a larger label, as the apt Kinks reference is not lost on potential suitors. (The Drink on 6th, midnight) -- Michael Chamy 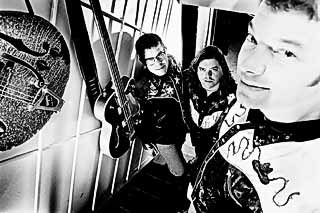 ST 37: Followers in the long tradition of Hawkwind and other eclectic, mostly European, Seventies space-rock acts, Austin's ST 37 gives the genre a tweak by being at least somewhat younger (but just as ugly) as their heroes. They also throw in homegrown nods to Roky Erickson and even a slight hint of country among the hornet-storm of droning guitars and sung/spoken futuristic themes. (Buffalo Club, midnight) -- Ken Lieck BUKKA ALLEN: Ivory man Bukka Allen has the right stuff coursing through his veins -- Lubbock Renaissancer Terry Allen. Like Pops, Bukka has a way with songs; his very fine debut from a few years back, Sweet Valentine, with its darkly lilting melodies, is more than overdue for a follow-up. Another one of Austin's best-kept secrets. (Momo's, midnight) -- Raoul Hernandez RANDY GARIBAY: Doug Sahm's premature passing in 1999 passed the torch of San Antone soul to fellow Westsider Randy Garibay. With able-bodied outfit Cats Don't Sleep, Garibay's Chicano Blues Man veers from raunchy Bo Diddley stomp ("Cabeza") to super-suave Bobby Blue territory ("Still Singing the Blues"), never leaving any doubt this ése was born with the blues. (Speakeasy, midnight) -- Christopher Gray JAKE ANDREWS: Young Jake Andrews escaped the blond-blues-boy image along with the "Little" tag when he released his knockout debut Time to Burn in 1999. The local guitarist has since used his time wisely, putting an even bluesier edge on his already soulful sound. Catch him now to see the future; Andrews shines in both realms. (Antone's, 1am) -- Margaret Moser MC OVERLORD: Despite a year where he picked up another Austin Music Award and finally wound up on a major label (albeit a cameo on Vallejo's 550/Epic debut), last year's SXSW pick still holds true: "Austin's highest-profile, yet still criminally undervalued, MC keeps getting better. He's also a formidable onstage threat." If there's any justice in this business, next year's "Pick" will preview his own major-label debut. (The Limelight, 1am) -- Andy Langer BLUES SPECIALISTS: Long the stomping grounds of renowned Austin bluesmen like the late Erbie Bowser and T.D. Bell, the Blues Specialists have become nothing less than a local institution. As good blues makes a conspicuous exit from our fair city, these standard-bearers keep rolling right along under the power of a rock-solid rhythm section and the lead of Mel Davis' harmonica. (Speakeasy, 1am) -- Christopher Hess RON FLYNT & THE BLUEHEARTS: Co-founder of 20/20, the New Wave act that brought you "Yellow Pills," Flynt continues to make irresistibly catchy music with the Bluehearts -- which on CD usually features most if not all of 20/20, plus the finest Austin-based musicians. Rather than running out of steam after 20-plus years, Flynt's recent work shows maturity without any loss of youthful enthusiasm. (Pecan St. Ale House, 1am) -- Ken Lieck SUBSET: Subset is regret tempered with the sugar rush of the moment, served up on a jelly roll kept in perpetual motion by Silver Scooter drummer Tom Hudson. The power trio's Post-Parlo debut, Overpass, registered on a number of local Top 10 lists, and they look forward to expanding their tightly knit operation to parts unknown. (Ritz Lounge, 1am) -- Michael Chamy GLORIA RECORD: Austin's Mineral once spoke to the hearts and souls of the emo generation, and frontman Chris Simpson and bassist Jeremy Gomez carry on that torch in the Gloria Record. Forsaking the bombastic explosions of their former outfit, the Gloria Record adorns Simpson's writhing vocals with piano, textured axework, and an atmospheric keyboard wash. A proper debut awaits after last year's superb A Lull in Traffic EP. (Downstairs at the Loft, 1am) -- Michael Chamy JAPANCAKES: Generally guitar-powered, but not exclusively, this Athens, Ga.-based collective plays some of the most enjoyable instrumental music in recent memory. The repetitive and slowly evolving sounds of this chamber orchestra evoke the passing landscape as seen from a moving train, or the soundtrack to a film yet to be shot. Country, classical, pop, and rock all collide on their new Kindercore CD, The Sleepy Strange. (Emo's Jr., 1am) -- David Lynch ANALOGUE II: Yes, that Analogue. Their 1996 debut AAD rode the Tortoise wave of post-Slint post-rock and succeeded brilliantly where others failed, infusing their finely honed craft with an uplifting melodicism. They re-emerged last year with Rock Proper on Rubric, the impetus for this rare non-Chapel Hill performance. (Iron Cactus, 1am) -- Michael Chamy PONG: Like a breakfast taco at Tamale House #3, shaking your booty to the delicious electronic groove jam of Pong is a quintessential Austin summer sport. Though all three members of the late Ed Hall now play in Pong, theirs is an altogether different veneer due to the preponderance of keyboards and synthesizers. Nevertheless, bassist Larry Strub and drummer Lyman Hardy still provide a fine bottom for all the freaky guitar/keyboard interplay up top. (Maggie Mae's, 1am) -- Greg Beets

YNGWIE J. MALMSTEEN'S RISING FORCE: The Swedish string savant, still highly popular in Europe and Asia, is back with a after a few years of personal setbacks and record-label hassles. A student of Hendrix and Deep Purple, Malmsteen used to practice until his fingers bled. Nowadays, his brand of neo-classical metal is just as likely to showcase a Bach-like counterpoint or Paganini 64th note as a scorching blues-rock riff or whammy-bar tsunami. (Back Room, 1am) -- David Lynch