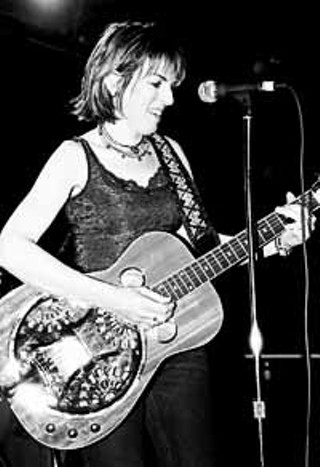 "Remember me? I used to live in music."

This time it wasn't MTV that wanted to set a series in Austin, but HBO. A lot of calls come into the office during the days and weeks leading up to South by Southwest -- bands, publicists, out-of-towners. Any and all media. This vice-president for exploratory programming development called the Chronicle looking for inside information. She said the idea was to capture something like Taxicab Confessions meets Reverb. Maybe it was the British accent. All right, it was the British accent. I said sure. I was shocked she had called me and not Andy Langer.

The show, she said, was being produced by the people who did Oz and Sex in the City. It would be a doc-style reality show about a down-on-his-luck songwriter who, after selling out to write hits for O-Town and Jessica Simpson, moves to Austin and opens a nightclub. Nudity, money laundering, and hipper bands than Conan O'Brien. I laughed for 10 solid minutes.

"If this guy's got any brains at all, the last thing he'd want to do is open a club," I told her. "You might as well get some lighter fluid, throw all your money on the living room floor, and roast up some Elgin sausage."

Too late. This thing's light was greener than the Colorado kind bud I must have been smoking. The network was still wavering between Ethan Hawke and SNL's Jimmy Fallon for the lead, but Rose McGowan was already aboard to play Aurora, the assertive Wiccan waitress. As we spoke, a crew was headed for Austin to film hours of NYPD-style location footage.

Great, I grumbled to myself. I'm already up to my eyeballs in South by Southwest crap, and now I've got to chaperone a bunch of camera-wielding Teamsters who want to see Sixth Street.

"Research!" I was hooked. At least I'd get to see what this lass looked like.

Oh Lord. She was gorgeous. Her dark, penetrating eyes hinted she might know a thing or two about sorcery herself.

I met them early one evening at Bergstrom, and after we got all their equipment into the rented van (thank God they only brought hand-helds), she said they were starved. Some businessman had freaked out on the plane and they hadn't even served those tiny bags of peanuts. She and I piled into my pickup and we told the guys in the van to try and keep up.

Since we were already down south, I drove to Jovita's. Or tried to. The lot was jammed, and I had to go deep into the neighborhood across South First to find a spot. "Tonight: The Gourds," read the restaurant/cantina's marquee.

Inside, it was as packed as the parking lot. It was still February, but felt like July because of all the bodies. Every square inch of available flat surface was covered with some sort of bottle or can. The bar resembled a trading pit on some commodities exchange.

The five band members ambled onstage. From the looks of them, things were still hot and heavy in their ongoing feud with Li'l Cap'n Travis over who brought beards back to Austin. Bassist Jimmy Smith's facial foliage was practically down to his navel. Neither side wanted to be the first to blink.

Whether driven by the beard battle or just getting off tour, the band cooked. They started with a steam-powered "El Paso" from last year's Bolsa de Agua, then picked up the pace even more on "Jesus Christ (With Signs Following)." Max Johnston's banjo and fiddle danced with Kevin Russell's mandolin and Claude Bernard's accordion like three kites in a stiff March wind, anchored by the sweat-soaked steadiness of Smith and drummer Keith Langford.

After an hour or so, the Hank Williams homage "Piss & Moan Blues" seemingly brought fresh legs to the audience, everyone two-stepping like it was the Broken Spoke. A spirited reading of the Doug Sahm standard "Amsterdam" brought even more hoots and hollers, and old favorite "Long Gone" wouldn't die until it became a prodigious instrumental jam to make the Allmans and Bill Monroe proud. Somehow, the Gourds dragged themselves back onstage for a final medley of the True Believers' "Hard Road" and the Ramones' "I Wanna Be Sedated."

"I saw them do this last week with 'Gin & Juice' and 'Heroin,'" I told my companion. She just stared at me.

Back in the truck, she fired up a smoke and said, "Going to take us to Sixth Street, then?" Her eyes said she wanted to go somewhere else. Like back to New York.

Through some previously curried favor with the parking gods, we actually found a decent space without having to pay. Still tense from the recent Mardi Gras riots, the cops eyed our cameras suspiciously.

"Take us to a new club," she insisted. I steered her toward the Metro.

More bedlam. A sea of denim, leather, and Converse All-Stars. And tight, tight dresses, worn by girls who looked like they wouldn't have any trouble getting "modeling" work. The one I was interested in was already looking at the stage, where six young men in shiny shirts and black leather pants were doing a decent job of exploring the musical gray areas between Santana and Mötley Crüe.

"That's Vallejo," I told her. "They're one of the most popular bands in Austin right now."

After filling her in on how the three Vallejo brothers had moved here from Alabama and built a loyal following by playing Steamboat and being played on local FM rock station KLBJ -- and how their CD last year, Into the New, was the first rock record on Emilio Estefan's Crescent Moon label -- I went off in search of a bathroom. When I came back, they were finishing up with an electric "Just Another Day."

"I liked that," she said as we gratefully sucked in lungsful of chill night air afterward on the sidewalk. "But why do they insist on doing that old AC/DC devil-horns thing?"

After that, I felt obliged to show her UT. We slipped into the Texas Union and entered the dimly lit singer-songwriter enclave known as the Cactus Cafe. Flanked by a steel guitarist and standup bassist, a goateed fellow was strumming an acoustic guitar and singing about disaster at a Canadian lumber camp.

"Oh, we lucked out," I told her. "This is Slaid Cleaves. His record Broke Down is still throwing off singles to Americana radio and like-minded stations like our KGSR. He's originally from Maine, but he moved here almost 10 years ago. Now he's one of the most talented songwriters in Austin. He hasn't played in town much since the record came out, though."

"Some of his songs are rather dark, aren't they?" she said with a shudder.

"Yeah, well, I should tell you about this guy Townes Van Zandt."

Something odd happened when we were exiting the building. Just as we were going out, this young woman in an ankle-length floral-print dress and a floppy hat pulled down over her eyes was coming in. Struggling to close her guitar case, I thought I caught a glimpse of the inside top cover and the sign taped to it: "Donations for Lucinda." It couldn't be.

"Something about that girl was bloody familiar," said my companion, looking back as we walked toward the Hole in the Wall.

"I thought so too," I agreed. "She looked just like Lucinda Williams. Like, from back in the Seventies when she used to busk on the Drag. I thought I heard she had just started her own label in Nashville, and that Broken Butterflies -- the follow-up to Car Wheels on a Gravel Road -- is supposed to come out in May."

Not wanting to further endanger my already slim chances, I chose not to share my suspicions with this Anglican angel. I knew Austin had been experiencing screwy little warps in the space-time continuum since the Chronicle published that "Lost Austin" issue back in January.

After a few drinks at the Hole, I felt brave enough to offer her a tour of West Campus. Her seductive smile suggested my awkward attempts at Southern hospitality weren't altogether ineffective. I was so busy smelling the jasmine in her shampoo I almost didn't notice the ruckus coming from this house off West 25th Street. I assumed it was a frat party.

We edged up to the window and managed to peek in. There, sitting around a table was none other than Jon Dee Graham and Alejandro Escovedo from the True Believers, Wild Seeds Michael Hall and Joey Shuffield, Glass Eye's Kathy McCarty, Steve Collier from Doctor's Mob, and Kim Longacre and Cindy Toth from the Reivers. They were laughing and smoking, and going over the changes to "The Rain Won't Help You When It's Over" and "I'm Sorry I Can't Rock You All Night Long."

"All those bands had such an impact on Austin in the Eighties that people still talk about them today," I whispered. "I asked Mike Hall about it a couple of days ago and he said that even though Doctor's Mob liked KISS and Glass Eye was into Television, they all felt like they were in it together, and that all they wanted to do was make records and tour. I guess that's what people mean when they talk about the good old days."

"When was that?" she asked. She was beginning to look tired.

"Maybe we should go," she said.

We were back downtown now, at Antone's this time. It was the new one on Fifth Street, of course, but since Derek O'Brien, Roscoe Beck, Riley Osborn, and George Rains were onstage warming up on some Jimmy Reed, it felt (to me at least) like being back at the old club when it was on Guadalupe.

But no, it was definitely 2001, because just then newly adopted Austinite James Cotton strode out and led the band through a stack of Chess classics. To top it off, local king and queen of the blues, Jimmie Vaughan and Lou Ann Barton, got up to do a few songs, climaxing on a delectable "In the Middle of the Night" from Double Trouble's new album.

That was when I felt her arm slide around my waist. Out on the dance floor, we slow-danced, and she drank me in with those eyes.

Things didn't work out, for us or the show. We tried the long-distance thing for a while, but nothing was the same after that night. After reading the report she wrote on her "field research," HBO dropped the idea of an Austin music series for a children's cartoon starring Kid Rock. Last I heard, she was working for Conan O'Brien, trying to book Mogwai's American TV debut.

The 2000-01 Austin Music Awards are Wednesday, March 14, at the Austin Music Hall. Music by the Gourds, Vallejo, Slaid Cleaves, Lucinda Williams and band, plus the "86ed" tribute to Austin in the Eighties, and a blues revue starring Jimmie Vaughan, James Cotton, and Lou Ann Barton. Perennial MC Paul Ray hosts, with amusements by improv troupe Monks' Night Out. Be there, 7:55pm sharp. Maybe you'll meet someone nice.