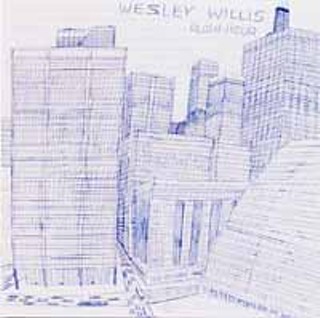 In the course of a decade, Wesley Willis has gone from Chicago street artist to internationally known cult figure on the strength of his simple, repetitive, and highly compelling spoken-word songs. The 6-foot-4, 320-pound schizophrenic writes songs that use the same exact same keyboard arrangement over and over, with only minor variations in tempo and key; Willis says the music drowns out the profanity-spewing voices in his head. Since Rush Hour was recorded in 1993, before Willis became a celebrity on the music circuit, it eschews songs about bands in favor of deeper, darker narratives of salvation ("Jesus Christ"), damnation ("Lake of Fire"), and Willis' never-ending battle with mental illness ("Chronic Schizophrenia," "Outburst"). These songs don't allow listeners the luxury of writing this off as novelty. "My yelling got me put out of the art store," Willis says somberly in "Outburst." "The voices in my head cussed at me. I was yelling like a wild animal. I felt like a jackass screaming at the top of my lungs." The battle takes a turn for the fantastic on tunes like "I Whipped Batman's Ass" and "The Vultures Ate My Dead Ass Up," the latter of which finds Willis taking on the "persona" of a dead deer being eaten by birds. "The vultures took off like a jet plane," he relates. "They were flying United." These less comedic, more abstract songs might not appeal to those who only know Willis from his MTV snippets, but for those willing to give Willis more than just a passing gawk, Rush Hour does plenty to flesh out the fringe artist from the sideshow anomaly. (Friday, March 16, Room 710, 1am)