Shoegazing With the Swells 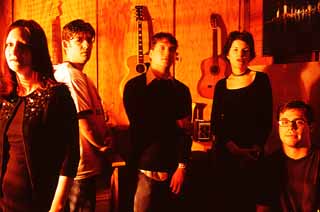 A bassline turns to melody, guitars and keyboards follow suit, soft notes repeat and reverberate until they catch the drum beat and become a veritable wall of sound. Momentum reined in by the steady metronomic beat, the volume and the tension build.

Indistinct vocals arise from nowhere, and the entire room is awash in a swirling miasma of sound and more sound -- sound so thick it has no beginning or end; sound so complete that the parts are nearly indistinguishable from one another. Even here, in their rehearsal space, confronted only by one another and a lone reporter, the eyes of every member of Austin quintet the Swells drop and remain fixed, intently, on their own shoes.

The Swells are a new band, but not really. Singer-songwriter-guitarist David Malerba is the only holdover from the group's 1992 inception, but he, bassist Alison Cabral, and guitarist Andrew Arthur have been together since 1997. Along with former drummer Kenneth Suter, they've released an EP and a full-length album, last year's outstanding Yesterday's Songs, on highly respected local label Sandwich Records. Their affiliation with the imprint came about somewhat serendipitously.

"Marcus Butler, the man behind Sandwich, came to a graphics place where I was working on the CD cover for Transona Five's Melatonin Bullet," Malerba explains. "There were the usual graphics problems, but I helped him a bit. We talked, I gave him a tape of some songs we had recorded, and he was like, 'Yeah, I'll put this out.'"

The band cut two more tracks with Reese Beeman of local notables 7% Solution, and by fall 1998, released their first recording -- the Electrostaticvibraverb EP. This is Shoegazer music, pure and simple; long songs, effects on nearly every instrument, echo and relay running rampant across a hazy, dreamy soundscape. One song landed on a 1998 compilation CD from Pop Culture Press magazine, which led to a call from Italian music mag Losing Today for a song for their compilation CD. Suddenly, in a very tangible sense, they had international exposure.

"We got really good response from both of those compilations," says Malerba. "We've had lots of feedback from Europe -- Italy, Spain, Denmark. We've found that people in Indonesia have stumbled onto Electrostaticvibraverb and write to us about it, so we try to keep up with that."

Not bad for a band that has yet to tour. In fall 1999, the band booked time at Stardog studios near the Arboretum, a place Malerba maintains should be "an Austin institution along with Hamilton Pool and Barton Springs" due to the owners' mind-boggling collection of gear, to start recording their next album.

Produced by Chris Cline, the product shows the time and effort put into the recording, a steady mix of moody, emotive, instrumentally oriented wanderings, and bright, concise pop songs that work together like peanut butter and jelly. Alone, each has its own undeniable qualities, but together, they become something far greater.

The result, Yesterday's Songs, lives somewhere between the relative swagger of Luna and the intensely dreamy tones of Slowdive. The Swells seem to have hit on a comfy and effective blend of Shoegazer and pop, not sacrificing the more ethereal elements of long instrumental builds and bashes, while developing and reveling in the catchy hooks they've found in and among the sonic flotsam.

Luck and timing, as they often do, played important roles in the Swells' development. Shortly after recording, Suter decided that he could no longer hold down double duty on drums and keyboards, so the trio faced another classifieds search. Although this is how Cabral eventually got involved, Malerba sat through numerous tryouts -- including one hopeful's serious attempt to fit in by beatboxing. The process was not an attractive one.

Bemoaning this to a friend, one Rachel Staggs, guitarist and vocalist for local space-rock outfit Experimental Aircraft, Cabral was suddenly presented with the solution. "What about me?" Staggs asked, and the deal was done. But the newfound stability didn't last long.

Shortly afterward, due to career and familial commitments and priorities, Suter quit the band. Mutual friends and previous shows had introduced Cabral to drummer John Spae, and his name came up as a possible replacement. Visiting him at his part-time day job at ABCDs, she asked him to learn the first seven songs of their new album and come play with them. "I was nervous," Spae recalls. "I like the CD a lot, so I didn't want to screw it up. I learned it very well."

He did, perfectly, and once again tryouts were rendered unnecessary. They were a band, sort of new, and one with vision. Shoegazer, as a musical movement, is rooted in British bands like Slowdive, Ride, Lush, Chapterhouse, and My Bloody Valentine. Though MBV's Isn't Anything is often heralded as Shoegazer's ground zero, the sonic strides of the Cocteau Twins and the Jesus & Mary Chain laid the foundation. Textured and layered, thick with effects, deafeningly loud guitars mesh with dreamy vocal harmonies and powerful drums for an emotionally charged cacophony that transcends noise and becomes sublime.

It's in these bands and these songs that everyone in the Swells finds common ground and the means to communicate almost telepathically when it comes to creating music. Just a few months in, both Staggs and Spae have assimilated entirely, and a whole batch of new songs is already materializing, becoming more complete with every practice.

From a low wooden chair in the corner of the garage behind Malerba's house, the sights and the sounds of this rehearsal seem incongruous -- or would be, were it not already established that the five are all devout fans of Shoegazer music. Stage presence, or lack thereof, is the reason for the genre's title, after all. Even when a song strikes a decidedly pop tone, a gentle sway and barely bobbing head are the only visible clues that music is going on here. That and the roar of the music.

Then there's the impressive array of gear placed precisely around the space. Guitars on the walls, pedals and cords on the floor, piano and keyboard with a digital readout and a stack of floppies, Mac terminal and keyboard, amps, monitors, mike screens -- were it not for the wood-bare walls and an old Radio Flyer runner-sled sitting cockeyed in the rafters, this would look more like a bona fide studio than a garage. That's the goal, eventually.

The more pressing goals are new songs and South by Southwest. As for the new songs, that decidedly pop tone is popping up more and more. While a wider audience and even (gasp!) radio airplay are high on the list of wants, the steps that lead to the completion of a song and the form those songs take are much simpler to trace.

"The first album wasn't so much about having something to say, it was more ambience and sound," says Malerba. "But when you move to where you want to voice something, or want to write a song where the vocals take over and you're telling a story, you move into the singer-songwriter realm. You move into a pop realm, and you have to bring back everything a bit from the wandering into a wanderlust.

"Don't get me wrong, I love to make noise like that," he continues. "But you haven't created something that says something. That's why I want to do this EP before the record."

The EP in question is a mostly electronica affair that is as yet more conceptual than realized, but it's something they need to get out of their systems nonetheless. The next album is still a ways off, but it gets closer every time they play together. As for SXSW, their attitude is one of almost shocking enthusiasm and respect.

"It's exciting to be accepted into something so huge, 'cause you know how many bands actually sent in their CD," Staggs says.

"It's kind of like Disney," Malerba offers. "It's a huge machine, but it's still pretty cool."

Cabral: "It's a milestone. The fact that we made it this year is a huge milestone for us."

Though the stage has been admittedly less comfortable for them than the studio, the Swells feel more at ease all the time. No headbanging or flying longhorns or stage moves of any kind, but in Cabral's words, the band projects a "respectable, reserved quality."

"Yeah, that and we have no frontman," Malerba laughs. "The bottom line is the song is what's most important. That never changes. Your live shows can't live on that long, unless someone gets stabbed at it like with the Stones or something. We want to deliver a good live show, but the songs are most important."