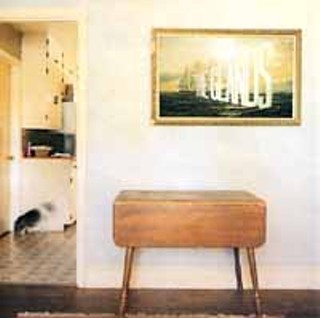 The indie rock revolution was never televised, and frankly, it suffered from the lack of exposure. What's worse is that it assured the fringe factions -- grad rock, lo-fi, etc.-- would be forever sequestered away in obscurity. As slack rockers, such is the fate that the Glands seem destined for. The fact that the Athens, Ga.-based band's self-titled sophomore effort is a tidy sampler of indie rock aptitude only makes that fate as sad as it is assured. What's doubly troubling, however, is that a careful listen reveals the band isn't really slacking. Instead, The Glands is well-measured and devoid of the buckets of self-serving irony that marred many a Matador band over the long haul. Something this perfectly effortless can only be the result of intention. It is as much overtly Sparklehorse and Guided by Drunks as it is subconsciously Syd Barrett crossed with Lou Barlow. And for how far it sprawls across the map stylistically, frontman Ross Shapiro never losses touch with a Mitch Easter-esque understanding of pop simplicity. It's by no means a work of staggering brilliance, but at least it's one of the fresher items to emerge from the generally stagnant indie rock pool as of late. If for no other reason than Shapiro et al. have stolen from the same sources available to everyone else, yet reassembled them into something catchy but not cold, The Glands proves there may be some life left beneath the scum coating the surface of said indie rock pool. (Thursday, March 15, Room 710, midnight)