Up Early and Out Late With Kissinger 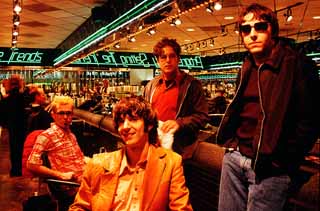 Eight o'clock in the morning is the most un-rock & roll hour of all. There are birds chirping, for God's sake. The daily crawl is in full effect on 183. And yet here are three-fourths of Kissinger in the pristine LBJ-S lobby, ready to plug their show at Emo's that night on the 101X morning show. Unfortunately, the one band member who's not here has the amp. Time for a phone call.

The somewhat bleary-eyed party is escorted down a hallway or two, to where Morning X jocks Trina & Ben are trying to give someone a trip to see A Perfect Circle in New Orleans -- provided they can correctly guess the number of hits on a standard-issue sheet of acid (300,000). The traffic report includes speculation about possible accidents involving Kissinger guitarist Steve Garvey's blue El Camino. The amp is on its way.

Kissinger's "Consider Bridgette," a Pixies-ish character sketch of a girl in a flower-print dress and the rake who shakes her hand, recently won five nights out of five on 101X's Like It or Spike It challenge. Kissinger joins Schatzi, the Riddlin' Kids, and Dynamite Hack as Austin groups whose poppier approach has hit a nerve with local listeners. On Morning X, "Bridgette" is a jangly respite from Lifehouse, (hed)p.e., and the new Fred Durst power ballad. Even Metallica is a bit much this early.

It's actually a rather bustling Friday morning at the North Austin media beehive. Kissinger just missed the Sexy Finger Champs in the parking lot, and who should come swaggering in later but Fort Worth's No. 1 crotch-rockers Pimpadelic. Bespectacled Steve Garvey ("Science") slips in and shares a laugh with his bandmates over the phone call. He did, in fact, wake up early -- too early -- and fell back asleep.

Small wonder the other three didn't do the same. Chopper ("Front") had a gig last night at Room 710 with his other band Girling. Lucky ("Bottom") didn't get off from the Flamingo Cantina until around 4am. And o3 ("Back"), father to a nine-day-old son, just spent his first night "in the other room." But that was last night, and this morning, cables are plugged in, amps arranged, levels checked, microphones tested. Since there's hardly enough room for a snare drum in the tiny studio, o3 makes himself useful by ensuring the makeshift equipment stack doesn't topple over.

At the stroke of 9am, Chopper is on the air.

"This is Chopper from Kissinger and you're listening to 101X."

He nods to Steve Garvey and Lucky, and scratches out the opening chords to another nugget from the band's debut, 2000's Charm. This one, "Goldrush," is a love letter of sorts to a girl where "a rainbow ends on both your breasts." When the microphone starts to sag, Chopper rides it down easy.

Later, after talking up their Web site www.kissingertheband.com, Kissinger yields the airwaves to Coldplay's "Yellow," more "Sex, Drugs, and Rock & Roll" trivia, and tries to hash out their story over breakfast tacos and biscuits and gravy at the Bluebonnet Kitchen on Burnet Road. The conversation lingers on anecdotes about band members' previous jobs, different spellings of 'Chopper' ("originally there were three P's ... the second P was silent"), and how best to define the word "ascetic." The best moment has to be the story of Charm rocker "John Bates."

Chopper confesses he doesn't know if John Bates is a real person or not, but that doesn't really matter. When the singer moved to town, his assigned phone number was the same as one "John Bates" had printed on his checks. Hot checks. After calls from jewelers, dry cleaners, and lingerie-modeling studios, the rising exasperation brought out Chopper's creative-writing background. The song's key lyric: "His face won't bounce when it hits the ground."

"The first time I got a call from the jeweler, they said, 'John Bates, your jewelry is waiting for you to come pick up,'" recounts Chopper. "So I quickly called them back and said, 'Hey, if John Bates shows up there, don't give him the jewelry, he writes hot checks.' They said, 'Oh, we know that, we were just trying to lure him in.' I think the modeling-lingerie place was doing the same thing, because this woman called and said, 'Is John Bates there? He left his underwear here.'"

Charm is a virtual rogue's gallery of shady types like Bates, or the dude in "Cryan Shame," selling "God Pop for rich kids at the mall." There's something very John Hughes about the album, especially "Urbia," where the narrator goes "shopping for a wife" and falls for a girl with "credit-card dreams." Same goes for Cameron Crowe, when the guy in "Girl on the Bus" practically does everything but hold up a radio blasting "In Your Eyes." But Kissinger would just as soon do without all the Eighties talk.

"I think all of us were alive and listening to music in the Eighties," says Lucky. "So yes, of course it had an influence on all of us and how we think of songs, probably. But I don't think that's what we're thinking about whenever we're playing our music or when we're writing our music especially."

"I love the fact that we're being compared to the Eighties," he says. "Some of my best memories are hanging out at the swimming pool in fifth grade and listening to that music on my radio. I'd love to give kids that feeling."

For such a band of the moment, one named "Best New Band" in the American-Statesman's 2000 end-of-year "Austin Music Pundits" poll, Kissinger has hardly come out of nowhere. As o3 puts it, "the only place we're not a new band is at Chopper's house and the rehearsal room." Chopper, o3, and Lucky first played together in late 1997 at Pato's Tacos under the acronym WFD, short for "Wrinkle Free Dick" and inspired by a flier featuring an ancient picture of Dick Clark.

Steve Garvey (never just "Steve") came aboard next, and when it came time to cut the their debut, the band enlisted the services of Swedish superproducer "Konrad Konradsson," aka Austin's John Croslin, also known for his work with Spoon, Sixteen Deluxe, the Damnations, and Guided by Voices. The band members' colorful pasts include stints with New England's Vertical Horizon, Austin punk heroes Ignorance Park, an early version of Smash Mouth ("we had the name first"), L.A. headbangers Suicide Angels, and Denton's Cornhole, whose output like "The Sausage Slide" is now forever lost to the ages.

Naturally, any band's ultimate test comes live. Kissinger took this idea seriously early on and resolved to be "the band that never practiced." A pivotal night at the Bates Motel, in which Chopper says, "We didn't look at our hands at all," made them reconsider.

Something clicked. Kissinger's contagious live energy has made them a weekend-caliber draw at the Hole in the Wall and most places on Red River. They're an anchor, in a sense, of a scene captured on Animatronic Records' God Stripe Gum, where "Bridgette" and "Urbia" join efforts by Ringer, Hotwheels Jr., Coco Candissi, Playdoh Squad, Matt the Electrician, Halley, Girling, and even Bo Bud Greene.

"There's definitely a good group of bands that are coming into their own right now," says Lucky. "Red Eyed Fly, Flamingo, 710 ..."

Finally, that night at Emo's, at the much more civilized hour of 1am, Kissinger leaves nothing to be desired. Even after a killer set from Dallas' Deathray Davies, the jet-spray choruses of "Bridgette" and "Goldrush" get all the heads nodding, while "John Bates," "Cryan Shame," and non-Charm titles "Testostoner" and (that word again) "Ascetic" simply slam. In a reassuring way, the show is like a Kissinger song come to life. This is most apparent in closer "Rock & Roll Asshole," not because of the PG-13 language, but because of the grin on Chopper's face when he implores the crowd to "Eat your rock & roll!"

But he might be smiling for another reason. Tomorrow morning, Saturday, Kissinger can all sleep as late as they want.

Kissinger plays Friday, March 2, at the Hole in the Wall with Hidden Speaker and the Wannabes.