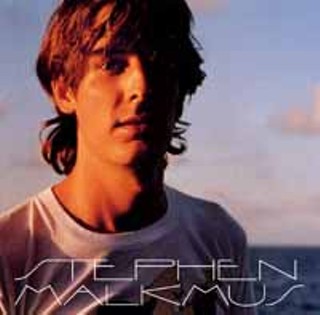 There's no truth to the rumor that Pavement has decided to simply change its name to "Stephen Malkmus." At least Pavement fans should hope not, because the bandleader's solo debut is one of those solo-album duds that's simply a watered-down version of the old band. Take, for instance, the lead single "Discretion Grove." It starts out nicely, with a muted strum keeping even keel with Malkmus' tension-building delivery. When the time for release comes at the end, however, the vehicle isn't there. Malkmus fulfills his end of the bargain, picking up the pace of his trademark stream of smarmy non sequiturs, but his new backing band, the Jicks, fall woefully short in their futile attempt to duplicate Spiral Stairs' rusty-guitar antics. "The Hook" starts out with a tiresome cock-rock beat, then falls on its face with a truly weak guitar solo that aspires to Stairs' spiral screechies, but once again fails miserably. The best cuts, "Troubbble" and the utterly singable "Phantasies," rely on a fun series of bells and wiggles mingling in unpredictable fashion with Malkmus' wildly whimsical vocals. Sadly, these are also the album's shortest cuts. Luckily, the lack of overall substance doesn't completely stifle the copious slow numbers. "Church on White," for one, radiates the elusive sense of regret so effective on parts of Slanted and Enchanted and Watery, Domestic. Pavement was always known for its inconsistency, but Malkmus takes this to new levels here, as most of the songs trudge through a soggy terrain sure to please only those Pavement-heads who accept Malkmus' every word as gospel. (Saturday, March 17, Austin Music Hall, 12:45am)