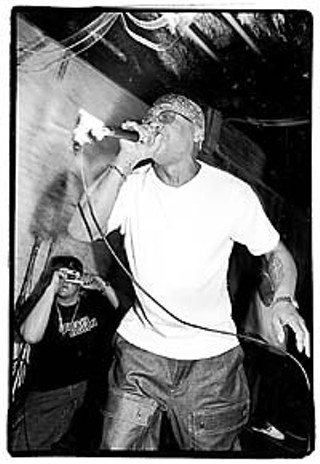 It started off small -- and early. About 8:40pm on a cold, cold winter's night. The small, freezing line outside met with a relatively small, warm crowd inside the cavernous Austin Music Hall, and when three guitarists, one of them wearing nothing but a large, white diaper, appeared along with two keyboardists, bass, and drums (and a dozen-or-so stage hand/entouragers on the periphery), the funk began. "We are Funkadelic," announced the MC. "We are not of this world." In these days of rap/metal, electronica, and good, old-fashioned lip-synced dance music, the marriage of electric rock music and hard-core funk might not seem like such alien concept, but when George Clinton founded his Church of the Electric Freakout in the early Seventies, it might as well have been from another universe. A North Carolina native who moved his Jersey-based doo wop group to Detroit in the early Sixties, Clinton founded a 40-plus-year career on the Motown sound had Jimi Hendrix and James Brown run the label. On LSD. Billed as "George Clinton & Parliament/Funkadelic," neither of Clinton's two psychedelic funk rock vehicles are those that recorded genre imprint masterpieces like One Nation Under a Groove (1978) or Tear the Roof Off (1993) -- no Bootsy Collins, no Bernie Worrell, no Maceo Parker -- but they get the job done. They didn't even need their boss for the first 40 minutes of the set. "Free your mind and your ass will follow," bellowed the MC, Clinton's greatest album title now part of the modern lexicon. "Tonight there's gonna be a lot of booty shakin', hand clappin', and ham-boning." There was, too. The mostly white, collegiate crowd got down the best they could, Clinton's party circuit beer bacchanalia hitting its stride when the 60-year-old Master Blaster of Ceremonies suddenly appeared among his musical progeny. By then, the ranks onstage had swelled along with the almost sold-out throng, the band including at its peak five guitarists, two bassists, three keyboardists, three backup singers, and a horn section. Old George doesn't sing much anymore -- the voice is shot -- but a little rump shaking goes a long way with his faithful. And what was not to shake to? Screaming solos, thundering basslines, endless jams. Bottomless funk. It's not often one sees a soundboard as big as Clinton's without a set list taped to it. This isn't a show, it's a ritual. "Shit, Goddamn, Get off Your Ass and Jam," went one tune, and the energy just kept ratcheting skyward. Of course, all those jamming oldies hits weren't exactly front and center, tunes like "One Nation Under a Groove" subsumed by intergalactic space jams, but then that wasn't the point. Freeing inhibitions was. For three … long … hours. In fact, Diaper was probably still soloing at midnight when local MC Bavu Blakes and his ninja acrobats hit the Mercury stage like Michelle Yeoh. Down on Sixth Street, the funk was flying, turntable and microphone replacing Clinton's17-piece Funkestra, but what this DIY ATX combo lacked in bass, it made up for in bounce. Old-school swagger is what NOOK followed with, another local lyrical entrepreneur yet to be discovered by the 3,000 strong at the Music Hall, but by 1:15am, the time for warm-up crews was over. Get Guru out of the backstage room everyone onstage keeps announcing he's sitting in. It happened, finally, the Gang Starr MC coming out of his corner like Mike Tyson smelling (f)ear. "Step up," he bellowed, "step the fuck up," and the 200-300 hard-cores went a-fire. "I don't need gimmicks," he boasted, his rap forceful and fluid, "gimme a fly beat, and I'm up in it." Man was, too -- almost as heavyweight as KRS-ONE at Antone's last year, only unlike Mr. Knowledge Reigns Supreme, who played two hours, or Señor P-Funk, who I'm guessing had packed up his three-ring by 2am, brother Jazzmatazz did a more standard hip-hop set: 35 minutes. Hard and fast. As tight as his doo-rag. The breakdancers didn't want it to end, and it didn't; at bar time, that's when the MC-off began. By that hour, however, some of us had already gotten our hard-core jollies.