Clay Blaker and His Songwriter's Tan 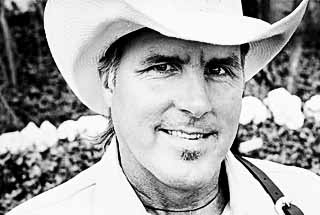 When it comes to Texas songwriters and performers, Clay Blaker is easily one of the most successful, yet the New Braunfels-based artist seems to fall under the radar of even dedicated Texas music fans. His songs have been recorded by the likes of George Strait, Tim McGraw, Mark Chesnutt, Clay Walker, the Derailers, LeAnn Rimes, Tyler England, Jim Lauderdale, Johnny Bush, Bill Kirchen, and among many others, Barbra Streisand. No, that's not a misprint.

Blaker's Texas Honky Tonk Band plays roughly 100 dates a year in the U.S. and Europe. His blend of country, honky-tonk, and Western swing, all done up with a rock & roll edge, can be found on his fifth and latest release Welcome to the Wasteland. Simply put, Blaker is one of the most unique performers around. So why haven't you ever heard of him?

Because he's comfortable with the fact you haven't. Though Blaker and his band have played Austin's Broken Spoke and Continental Club on occasion, being a successful live act has never been his primary goal. Songwriting is. And as any songwriter will tell you, writing songs is a craft that doesn't necessarily draw attention to its practitioners. Not always, anyway. Blaker is just fine with that -- he's more than happy with the way his career has turned out.

The first thing that leaps out about Blaker is his tan. He is tall, lean, and looks much younger than his 50 years. Over lunch recently, he acknowledged that he'd just returned from three weeks in Hawaii, where his parents live and where, surprisingly, he still spends a great deal of time surfing. Hence the tan.

Born in Houston, Blaker moved to Maui with his family while he was in his late teens. Getting his career off the launching pad in the early Seventies, he moved to Southern California to take part in the region's booming country rock scene. That's where he heard Willie, Waylon, and Jerry Jeff and figured his brand of country music would be right at home in Austin, so he moved back to Texas.

"This guy that played guitar for me in California moved back about year before I did," he recalls. "When I got back, he told me about this band he'd found that was playing around San Marcos. They played stuff that was similar to what we were doing, and I thought I should check it out. So I went down to the Cheatham St. Warehouse to see them. They called themselves the Ace in the Hole Band."

Blaker became friends with the Ace in the Hole gang, and in particular, its frontman: a skinny, handsome, deep-voiced singer by the name of George Strait. Before long, Blaker and Strait's bands were gigging together around Houston and Central Texas.

"We played some shows at Cheatham St., Gruene Hall, the Broken Spoke, the Split Rail," ticks off Blaker. "It was so much fun that we ended up doing three or four dates a month together. That's the way it was in the old days, bands would befriend each other and try and help each other out. There was a lot of camaraderie back then that seemed to go away for a while, but it's coming back some now.

"George and I were both writing songs at that time," he continues. "I did three or four of his songs, and he was doing several songs of mine. A lot of the time, we'd set up two drum kits and at the end of the night, get members of both bands up on stage and jam -- like the Allman Brothers."

When Strait signed as a solo artist to MCA Records in the mid-Seventies and began recording in earnest during the early Eighties, he included Blaker's "The Only Thing I Have Left" on his second album, 1982's Strait From the Heart. Blaker's songwriting star has been on the rise ever since. Over the years, Strait has recorded six more Blaker songs, including "She Lays It All on the Line" for the soundtrack to Strait's 1992 film Pure Country.

"They cut that song for the movie one week I was up in Nashville," Blaker relates. "Word got out on the street that it had no publishing on it, and in one day, I had four offers on the table.

"I took the deal I thought would be the best for me, which was with Famous Music. It ended up being my most successful song financially. That movie soundtrack is the biggest-selling of all George's albums -- it's sold over 6 million, and I got a fee for the movie rights, too.

"That was the song that pushed me over the top as a songwriter."

Having a song on a multimillion-selling album will do that. But even though most of his success has come though songwriting, Blaker asserts that performing is his first love, that he still sees himself as an artist first and songwriter second. Not surprisingly, when he's onstage, Blaker plays his own material, not other folks'. In the country idiom, that's not always a given.

"I never wanted to be in a bar band," he chuckles. "I always had my own vision for my own music. I'm real stubborn and independent in that way. I wanted to write my own songs, even when I was a teenager. I still look at writing songs just so I can get up and play them live. I can't get that out of my blood."

Even so, Blaker admits being blown away when Barbra Streisand recorded his song "We Must Be Loving Right" in 1999. The diva of all divas heard it on a George Strait album her husband, country music fan James Brolin, gave her.

"That whole thing is still unbelievable," he marvels. "When I heard her sing that song, I cried. But honestly, I get as big a kick as out of Johnny Bush or the Derailers covering one of my songs. One of your peers liking your stuff is a big honor as well."

In another testimony to his talents, Blaker has managed to survive country music's current commercial downturn. Artists, publishing companies, and songwriters are all feeling the crunch, but so far Blaker has been spared.

"The first thing publishers do is let writers go," he explains. "There are a lot of writers on the street right now. I'm lucky to still have my deal. But the country music business is cyclical; they're paying for it now, but it's just going to force them to come looking for some real acts, bands that are making real music."

Jim Lauderdale, the acclaimed singer-songwriter with several Strait cuts under his own belt -- including current hit "Don't Make Me Come Over There and Love You" -- has begun co-writing songs with Blaker, but disagrees with his newfound partner. On the phone from his Nashville home, Lauderdale says he has yet to feel the pinch, but "I'm going to keep an eye out." One thing he and Blaker do agree on, though, is what Nashville needs to do to fix the problem: get back to its roots.

"I think things got so big that there was just no way they could keep going the way they were," posits Lauderdale. "There was some type of fallout that was due."

Keeping it real has never been a problem for Blaker. For all his numerous songwriting accomplishments, his four previous recordings, What a Way to Live (1981), Sooner or Later (1986), Laying It All on the Line (1993), and Rumor Town (1998) all have one thing in common: The music falls right on the edge of country. Right where Blaker's most comfortable.

"I've always been stubbornly independent," he maintains. "In the mid-Eighties, I had a manager and booking agent in Nashville and we did some showcases, but I didn't fit the mold of what they were looking for. When I was real young, they wouldn't touch you unless you were a seasoned road warrior. Then when I got to that point, the rules changed and they were looking for someone who was young and new. I came close to getting a deal a couple of times. I've had some bad luck, but it's fine with me."

For now, Blaker is content to focus on Welcome to the Wasteland. Those familiar with Lauderdale's work as performer will note his influence on Blaker's sound; it's country, but with a distinct edge that adds punch. The pair co-wrote two songs on the disc, and Blaker is the first to admit he welcomes the opportunity.

"Jim's influenced me tremendously," he crows. "We're in the same age group and have the same influences, and those are the reasons we work together so well."

"Clay's like a Texas oak," opines Lauderdale. "Not real flashy, but he's got the respect of the people here in Nashville and in Texas. Things seem to be snowballing for him, and it couldn't happen to a better man."