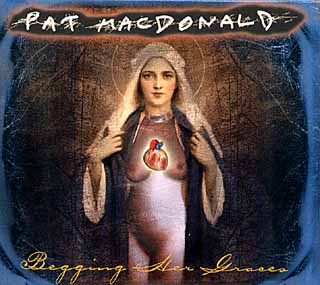 It always seems as if Pat MacDonald isn't quite telling us the whole story -- that the ex-Timbuk 3 principal is holding something back, a bit of information that gives him the advantage. His songs shudder with a dark intensity, sung by a knowing voice fronting a formidable wit. And the literary acrobatics are only half the story; the music on this European release, enhanced by producer John Parish and many other contributors, is both delicate and defiant, an unusual depth for the traditional instrumentations, and a strange familiarity with lute, varija, and archilaud. Opener "Whiskey Bottle" starts things off on a typically contradictory note: hope and despair in the same breath. The album comes alive with "Little Dark Angel," a horribly catchy melody, the sweet-hot juxtaposition of plunky banjo and electric guitar the perfect foil for the vocal play between MacDonald's morose mid-tone and Lidia Pujol's lilting backup. Solo acoustic numbers glide off full electric numbers, the remainder of the album demonstrating a wider range of sounds than his last release ...Sleeps With His Guitar. No clutter, though, only the realization of ideas and melodies. "Severine" is disarmingly straightforward and sincere, "Space Kitty Blues" is a nutty romp -- the contradictions just won't leave you alone. There's a lot Pat MacDonald hasn't told us -- not yet, anyway.