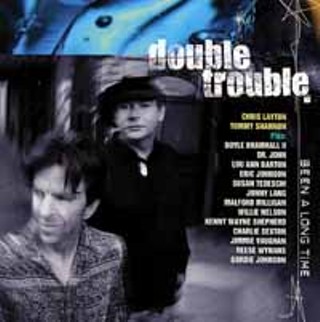 Been a Long Time (Tone Cool)

Despite three solid, radio-friendly tracks that start off Been a Long Time, it's not until Susan Tedeschi belts out "Been a long time since I rock and rolled!" that Double Trouble's first "solo" album kicks into gear. Maybe that's why the opening line to the Led Zeppelin classic was appropriate; it's been a long lonely, lonely, lonely, lonely, lonely time since Double Trouble founder Stevie Ray Vaughan died, and lesser bands would have taken a vow of silence or gone their separate ways. When Vaughan paired up Tommy Shannon on bass and Chris Layton on drums more than 20 years ago, he created a formidable rhythm section that not even his death could shake. The stacks of SRV box sets, greatest hits collections, and vault treasures released since are like guideposts pointing to Layton and Shannon that read "Here! Do something with them!" Someone did, pairing the duo with a series of friends and fellow players, and making Been a Long Time a gem of a recording, sparkling like facets of a long-hidden jewel. That's not to suggest that Layton and Shannon haven't been busy over the past decade (both the Arc Angels and Storyville provided the two ample room to exercise their chops), but Been a Long Time is a seamless segue back into the blues-rock tradition still revered. It's also a tribute to Vaughan without falling into treacly sentimentality or cookie-cutter imitation. Tedeschi, who also shines on "In the Garden" with Eric Johnson, joins a heavenly host of guests like Willie Nelson and Dr. John ("Baby, There's No One Like You"), Jonny Lang ("Groundhog Day"), Malford Milligan and Kenny Wayne Shepherd ("Cry Sky"), and an Arc Angels reunion with Doyle Bramhall II and Charlie Sexton ("Turn Towards the Mirror"). It's not hyperbole to say that each of the 10 tracks stands on its own, but put "In the Middle of the Night" on repeat the next time low lights and soft lips are in order: The Lou Ann Barton and Jimmie Vaughan duet is sexy and sublime, and you'll have Double Trouble to thank for a memorable evening. Might not be such a long time before they do it again.