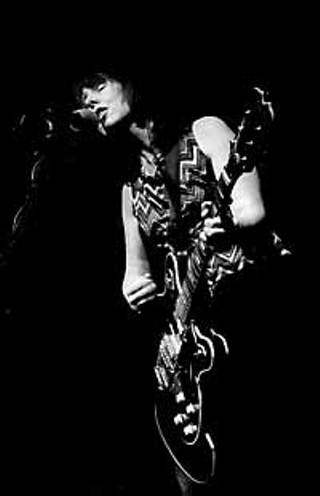 Amy Rigby at the Saxon Pub (Photo By John Anderson)

"I wanted to have a professional show," said Amy Rigby after her second song, primping her already mussed up 'do and adjusting her guacamole-green, hollow-body Les Paul. "I tried to put on some make-up in the bathroom before the show, and the brush fell in the toilet." The cute, onetime New Waver, who still uses eyeliner to good effect, gave an embarrassed smile. "I hope that's not indicative of the show." Like a few seasoned local female singer-songwriters (Tish Hinojosa, Barbara K, Eliza Gilkyson, for example), the Nashville-dwelling Rigby can get away with bathroom humor when it's as disarming as she is. "Wait Till I Get You Home," leading off Rigby's latest LP, The Sugar Tree, and the album's most memorable track, "Balls" ("wish I could grow a pair ..."), had already, ensured that her Saxon Pub debut wasn't going into the toilet. Given that the fortysomething single mother of one hasn't played Austin other than South by Southwest since her 1996 solo debut Diary of a Mod Housewife made middle-aged rock & roll dreams seem just as sexy and melancholy as any teenager's, chances were that wasn't going to happen anyway. Not when her SXSW showcase last year at the Cactus Cafe was as masterful and high-energy as Lucinda Williams probably was at the same venue back in the day. Citing "trouble in the love department," Rigby next went into another Sugar Tree standout, "Cynically Yours," and while her four-piece band, including the evening's second act on guitar, Duane Jarvis (the two share a rhythm section and van), often made her well-honed lyrics hard to decipher, her hourlong supper club set expertly balanced innocence with experience. "20 Questions," from Mod Housewife, and the nostalgic "Summer of My Wasted Youth," from 1998's second-act sleeper Middlescene, played like Liz Phair for baby boomers even as their author plugged her online diaries. "Sophisticated and well-informed," she called her audience while introducing a Maureen Tucker cover, then went straight for the libido on her own "Rode Hard." "Is there anyone here over 35?" she asked toward the end of the set. "Yes, cause it's an early show .... For you young people, you probably don't wanna know this, but it gets uglier as you get older." Seeing that Rigby has gone from a Jersey girl with a day job to a Nashville songwriter with a publishing deal in the four years between Mod Housewife and Sugar Tree, that may not necessarily be true.