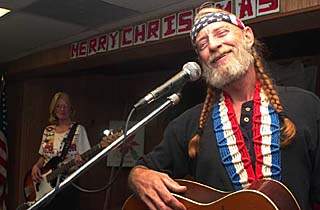 On a brisk Wednesday evening shortly before Christmas, at the rec center of Harlingen's Palm Gardens RV Park, about 50 Winter Texans sit silently in folding chairs. Arms crossed in front of them, they await the evening's entertainment. "He's shorter than the real one," a champagne-haired woman whispers loudly to her husband. The husband nods.

The woman, a self-admitted "Christmas freak" resplendent in a snowman sweatshirt, large, blinking poinsettia pin, and Texas-shaped earrings flashing red lights in the dark room, sighs with disapproval. Finally, a tight-permed woman in the front row, who says she's from Minnesota, breaks the awkward silence.

"How about 'Whiskey River'?"

Almost Willie, a wiry man blessed with the long locks and grizzled good looks of none other than Willie Nelson, smiles as he hits the first note. Decidedly not Willie Nelson. He may look like the country music legend, but there's no mistaking him for the real thing when he starts to mimic Nelson's famous vibrato. Occasionally, it sounds like he's singing in an Irish Spring soap commercial. Sometimes, though, he almost nails it, especially when he really gets going on the chorus of "On the Road Again."

Unfortunately, tonight it seems the crowd is more interested in the free homemade ice cream advertised for after the show than in America's No. 1 Willie Nelson impersonator. Halfway through "On the Road Again," he bungles the guitar solo and laughs it off.

Patsy Mitchell, Almost Willie's bass player and girlfriend of eight and a half months, thumps away at the chorus on her bass and harmonizes with her throaty alto. Though Almost Willie's Christian name is Tom Lawford, even Mitchell usually calls him "Willie."

After the show, Almost Willie hangs around his souvenir table in the back, where he sells red, white, and blue bandannas and autographed photos of himself strumming a guitar with the same worn-out hole as Nelson's trademark "Trigger." He admits it took him less than an hour to achieve the desired look -- with the aid of a few power tools. A couple of people halfheartedly peruse the bandannas and photos, but the line for homemade ice cream nearly snakes out the door.

"Tough crowd," he says. "Tonight I felt like I was working in the funeral business again."

Even on off nights, the former used-car salesman and funeral director from Missouri has managed to do what most folks only dream of -- ditch the boss and the workaday grind for the open road and a life of the unexpected. Anything can happen, and often does, in the life of Almost Willie. Just the other day, Lawford and Mitchell found themselves clearing almost $300 at a clothing-optional RV park.

"We were going to play naked," he smirks. "There were probably 60 naked old people in the pool. You know, I figured when in Rome ... So I tried to talk Patsy into it, but she said it was too cold."

Lawford knows his ticket to ride could end instantly were the real Willie Nelson to disapprove of his act. He admits surprise over the fact that that hasn't happened.

"He could shut me down if he wanted to," says Lawford, stepping into his own RV parked outside the recreation center. "I shook his hand in 1986, and all he said was, 'All right Almost, make a buck.'"

He takes a swig from a bottle of Jack Daniels. The inside of the cramped RV is cluttered with clothing, a fringed brown leather jacket draped over the driver's seat. Pinned on the wall above is a photo taken at Sturgis: A grinning Almost Willie sits on the back of a Harley behind a blond in a stars-and-stripes bikini.

"The man is an icon," says Lawford, taking another swig. "Red Headed Stranger -- man, what a record."

One time, says Lawford, Nelson's management put him to work filling in for the country star at Nashville's Fan Fair, signing autographs in Nelson's booth.

"I guess they thought it was funny," he says. "Instead of nothing, the fans got Almost Willie signing their autographs. I don't think Willie Nelson ever made it to Fan Fair that year."

Lawford's transition into the country music legend began at a friend's Halloween party in 1985. The clean-shaven, good-looking funeral director had always wondered how he'd look with a beard, and his wife at the time suggested he go to the party as Willie Nelson. With the help of fake braids and painting his new beard white, Lawford won first prize for best costume.

Yet while he may have looked like Willie Nelson -- albeit 20 pounds lighter and 15 years younger -- he didn't know the first thing about playing guitar.

"It took me two years to learn five Willie Nelson songs," he says. "Let's just say I wasn't a natural."

For kicks, Lawford began playing backyard barbecues and birthday parties. Since he had never heard of another Willie Nelson impersonator, he started thinking about learning some more songs and taking his show on the road. A veterinarian friend taught him how to play guitar.

"By 1990, I had 30 Willie Nelson songs down, plus an old spiritual number, 'Just a Closer Walk With Thee,' which I learned in the funeral business," he says.

Lawford's second ex-wife cooked up the Almost Willie moniker, and shortly thereafter, he hit the highway in a 1976 RV emblazoned with the Texas flag and his new name. In over 10 years on the road, only two or three other fake Willies have crossed his path.

"There are a couple of other Willies out there, but they're not as good as me," he crows.

"There's that guy in Las Cruces that sounds better than you," Mitchell reminds him.

Lawford says he bills himself as America's No. 1 Willie Nelson impersonator because he looks like the real Nelson. Even one of Willie's numerous ex-wives agrees.

"I met Shirley, his ex-wife, in Branson and she said I looked better than Willie," he says.

Lawford spends part of his winters in South Texas, playing at RV parks packed with Winter Texans. In January, he migrates north and plays along the way, living in campgrounds and Wal-Mart parking lots until he reaches Quartzsite, Ariz., a place he calls an RVer's paradise.

"Just picture 37,000 RVers lined up with one main street right down the middle," he says, then gestures toward the Winter Texans milling around outside the rec center. "This is an old folks party. See, I've got two kinds of shows I do: a bar show, which I do in Quartzsite, and the day show which I do here."

Disapprovingly, he adds, "Down here, folks are ready for bed by 9pm."

Mitchell, a mellow blonde also in her mid-fifties, says Lawford rarely books shows in advance, as he doesn't like to be tied down in case something better comes along. He doesn't have a phone or any real fixed address, preferring to just show up at RV parks and ask if they like Willie Nelson and want some entertainment.

"Just today we were offered a Chamber of Commerce job, which should pay pretty good," she says.

Mitchell, a Pentecostal preacher's daughter from Paris, Ky., met Almost Willie at an RV park in Sarcoxie, Mo. Two weeks before her third divorce was finalized, Mitchell, who plays several instruments, asked Lawford if she could sit in on mandolin.

"She was real cute, so I said, 'Okay,'" recalls Lawford. "But who ever heard of a Willie Nelson song with mandolin?"

He told her what he really needed was a bass player. Mitchell said she could play bass and sing too. A few days later, she signed her divorce papers and went on the road as Almost Willie's rhythm section. Tonight, she mans the souvenir table while Lawford shakes hands and makes small talk with the audience. After the performance, she loads most of the equipment into the RV and doesn't look too pleased about it. Most of the time, she says, Lawford is an easygoing and patient guy on the road.

"We don't argue," she marvels, shaking her head. "I don't know why, because we're together 24-7. If we've got a problem, we sit and talk about it. I get a little loud sometimes, but we have fun together."

On a good night, Mitchell says the couple makes more than just gas money, playing for tips or charging $2 a head at RV parks.

"It's not a bad life," she says. "We do pretty well and we're self-contained."

"I always do better in Texas, because it's where Willie is from," Lawford explains.

Naturally, his favorite city in Texas is Austin, because that's where Willie's from.

"Man, I love Austin," he says. "I was there for South by Southwest last year. Not doing anything official, just messing around. I went and saw Willie's house, but the guard said he was home with his family so I couldn't go inside."

So if he ever met Willie again, what would he say? He pauses and thinks for a moment before answering.

"I'd like to sit down with him and drink about a half a bottle of Jack Daniels, and just shoot the breeze."

"Well I gave to myself," he says. "And if anyone disputes it I'd like to see them try." 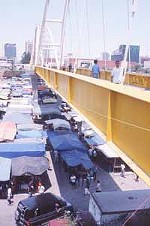 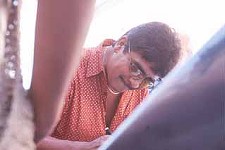