The Austin Music Awards lineup starts to trickle out. 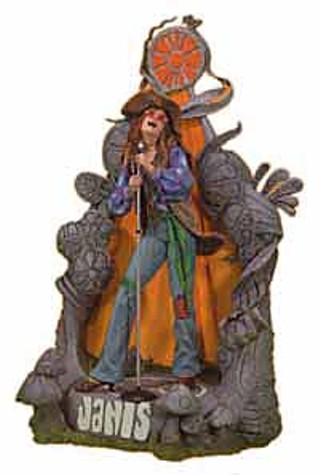 I Wanna SXSW You Up

As South by Southwest nears, confirmations are finally coming in as far as the lineup for the Austin Music Awards 2000-01, to be held March 14 at the Austin Music Hall. On tap so far are emcee Paul Ray, bands Vallejo and the Gourds, and an all-star revue of Austinites who had classic bands in the Eighties. Tentatively called "86ed," the undertaking so far encompasses Mike Hall and Randy Franklin of the Wild Seeds, Kim Longacre from the Reivers, True Believers Jon Dee Graham and Alejandro Escovedo, Glass Eye's Kathy McCarty, and Steve Collier from Doctors Mob, with possibly more to be announced. Awards Show organizer Margaret Moser promises that "86ed" will not be limited to one epic rendition of "Gloria," but refuses to rule out the affair culminating in a "Sweet Jane" all-nighter. More names to come for the Awards, and tickets will be on sale sometime before the end of February. As far as new names in SXSW proper this week, Bilal, White Stripes, and Pete Yorn have something in common besides showcases at the music festival this year: They and two or three other as-yet-confirmeds are among the current Rolling Stone's "Ten to Watch" 2001 feature. That's the issue with Jennifer Lopez on the cover, and while I believe she of the new J.Lo album and former Selena impersonator has not applied to SXSW, now might be a good time for someone to call in one of those major-label favors! Also in that issue of the magazine (besides Waterloo Records' John Kunz on selling 600 copies of the SRV box set over the holidays), note the featurette on Tenacious D's Jack Black and Saving Silverman, his forthcoming film about a "Neil Diamond cover band torn apart by girl trouble." Anyone remember how fascinated Black and D-mate Kyle Gass were by the Diamond Smugglers at last year's SXSW? I do.

The Next Air Wave

What are those damn computer people in Austin doing for music? I've been wanting an answer to that question for a while now, and here's a good one. The Wavefly people up on 183 say they're taking Internet music (MP3s and the like) "the last 100 feet" and moving it from your computer into your living room where the TV is, and yes, even out on the highway in your car. In fact, they showed me how they're doing it: with their new Digital Media Player and new Media Gateway. The details are a bit technical (thank God they have a brochure), but DMPs basically import signals (sound and/or images) from your home PC to your home entertainment center via a unit that looks and works like any other typical home stereo component. Wavefly is not a manufacturing company itself, but the company is expecting to have their products out by this summer at prices comparable to that of current multi-CD players. At the risk of jumping the gun here, with a few more refinements, this should among other things completely end the microradio legal problem, since unlike commercial FM frequencies, the FCC doesn't require a license for Internet stations; the problem up till now has been making a Net radio station signal easily accessible away from the PC. Drew Bennett, station manager of Internet radio station Psychobaby.com (formerly Georgetown/ Austin-based "real" radio station K-NACK-FM), says another company has an Internet boom box on the way as well, and I for one am curious to see if indeed this development "continues the evolution of music," as the Wavefly people are claiming. Psychobaby's marketing manager, Raydog Seggern, says "the whole premise [of Psychobaby.com] was that we expected this advance in technology to come around." Psychobaby.com is one of the first wave of Internet radio stations that's set up in the hopes of being a commercially viable station, while paying more than lip service to local and up-and-coming artists. Wavefly's timing couldn't be better since big corporate FM stations now flit from one "who cares" format to another with amazing frequency: This week K-NACK's old spot, 107.7FM, switched from the nondescript Seventies hit station "the Hawk" to nondescript Eighties station "the End" (is that a prediction?). I'm relishing the moment that affordable Net radio makes it into my car, an infinite number of new listening options opens up, and these old-fashioned radio stations become the dinosaurs that their playlists are already.

While we're waiting for the revolution, you might have noticed that noncommercial FM station KUT has some changes happening now, with more to come in the future. Concurrent with the arrival of new program director, Hawk Mendenhall, is an hour less of John Aielli in the morning, and the replacement of the locally based American Pop program with the similar, syndicated American Roots show. Given that Mendenhall isn't just the new program director, but rather the first PD KUT has had since 1982, some locals fear the station might become more format-based and lose its freeform style, effectively turning KUT into a clone of commercial AAA station KGSR-FM. In reality, the extension of Morning Edition in the AM and the replacement of retiring Louis Harrison's American Pop with KUT alumnus Nick Spitzer's syndicated American Roots on Sundays at 2pm actually preceded Mendenhall's debut on Jan. 25. Not to worry, says KUT General Manager Stewart Vanderwilt, describing the PD position at the station as one of "designated listener," or one who works with the producers to assist them with station operations so they can focus their attention on their programs. "I think we do something really unique," assures Vanderwilt, "and we're going to maintain that. I think we can be more organized and still maintain our integrity." Oh, and yes, just like you and I, KUT has been bombarded with those ridiculous chain e-mails claiming that Congress is shutting down NPR, PBS, and the NEA. "Bogus bullshit," notes Vanderwilt succinctly, "out of date and inaccurate." In point of fact, he has had to draft an official rebuttal to the nuisance mail noting that the "crisis" was averted in 1995, and that since that time, in the first session of the 106th Congress (1999), for instance, the Corporation for Public Broadcasting received a $348.8 million appropriation for the year 2002, with funding for 2003 expected to be around $365 million. That doesn't mean you can start ignoring those KUT pledge drives, however (the last one brought in around $500,000), because keeping a top-notch, high-wattage radio station like KUT on the air doesn't come cheap.

Given what John Kunz told Rolling Stone, it seems only right to report that the Stevie Ray Vaughan box set has gone gold, the gold standard for box sets now being 500,000 copies divided by the number of discs. In this case, there's four, and it shouldn't be too surprising that the package has topped 125,000 in actual sales. Coming up on Feb. 17, Austin City Limits chimes in with the less-than-stellarly titled "Stevie Ray Vaughan: the Outtakes" program, which collects previously unbroadcast performances from his 1983 and 1990 tapings for the show. The next week takes us back up to the present with the debut of the recently taped Double Trouble show, and before that are Bruce Hornsby and Eric Johnson on 2/3 and the Dixie Chicks on 2/10... This Friday marks longtime local music scenester and Continental Club back door guardienne Dianne Scott's 50th birthday; the club hosts a SIMS benefit and semi-Skunks reunion that night as Jesse Sublett and Jon Dee Graham mark the release of the band's new/old Earthquake Shake CD. Look for a full reunion with drummer Billy Blackmon in the spring, but in the meantime, seeing as L.A.'s Lazy Cowgirls and S.A.'s Sons of Hercules are also on the bill Friday, might I suggest a battle of the "Gimme Some"s? Bedbug, currently Psychobaby.com's "Artist of the Moment," report that in an effort to set a new precedent for CD release parties in Austin, "we have decided to go ahead and actually have CDs at the shows" that fête the issuing of their new album. Said shows include an in-store Friday at Thirty Three Degrees, 6pm, and a gig Saturday at the Ritz Lounge with Fivehead and Subset... There's a Stubb's gig on Saturday (see Music Listings, p.96), but after that, Brandon Durham of Palaxy Tracks says that the band's last show in Austin is on Friday, Feb. 23 (unless they get in to SXSW). He and bandmates Brad Murph and Keith Grap are moving to Chicago to "continue the legacy up north" with a different drummer, but same name. "Personally," says Durham, "I just can't live here anymore."... Country.com reports that, "Last year, country album sales dropped by more than two million below the 1999 level" and as a result, a number of artists listed last year by their labels do not appear on the 2001 rosters. Among the Texas and related artists on Web site's dismissed list are Robert Earl Keen, the Mavericks, Lee Roy Parnell, Bruce Robison (bro Charlie and pal Jack Ingram remain on Lucky Dog's roster), Randy Travis, and Monte Warden. To give you a further idea of the state of country music, among those who do still rate label support are the following: Garth Brooks, Sawyer Brown, LeAnn Rimes, Kenny Rogers, Jeff Foxworthy (hey, they included him on their list), Ty "Whacker" Herndon, Billy Ray Cyrus, and of course the inimitable Cledus T. Judd... Album title of the week goes to Woody Allen Stunt Footage, due in stores next week from Mike Nicolai on Minneapolis label Garage Door... Seth Tiven is feeling generous; the new Dumptruck album Lemmings Travel to the Sea comes with a free 70-minute disc of live tracks from the band's yesterdays. The band has a CD release party coming up in a couple of weeks, so if you find out, tell current Dumper Hunter Darby. He was asking me earlier if I knew... Kitty Gordon is the latest India Records act to take advantage of the local label's weekly showcase at Momo's for its convenience as a release party locale. The shindig for the band's Weather is there this Tuesday... Finally, along with the Spinal Tap figures I had Austin Books order and the "talking" Master P doll Christopher Gray got for Christmas (it says "Uhhhh!"), keep a look out for the Janis Joplin action figure from McFarlane Toys in stores now -- complete with spectacles and floppy hat to accessorize, but no whiskey bottle. Oddly enough, I haven't seen them for sale at Threadgill's...