Don Rich & the Buckaroos and Buck Owens and His Buckaroos 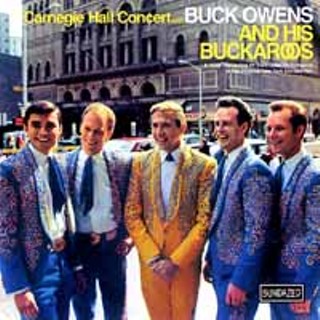 Buck Owens and His Buckaroos

Don Rich and Buck Owens began a musical collaboration in 1959 that, quite simply, produced some of the best country music of the next decade. Rich, 13 years the junior, was a fiddler when the two hooked up, but soon he was picking up Buck's trademark guitar licks. Before long he had picked up the ball and run with it, to the extent that Owens had to resort to browbeating to get him to pick up the fiddle again. The two were not only bandmates and songwriting partners, but close friends; Rich's untimely death from a 1974 motorcycle accident put Owens into a tailspin that effectively ended his music career for another decade. Sundazed's Country Pickin': The Don Rich Anthology chronicles the band's Sixties heyday, with songs that spotlight Rich's voice and fiddle work as well as his fluid Telecaster twang. Of 24 tracks here, there's hardly a clunker among them, Rich's guitar-driven instrumentals bringing to mind the Ventures with their less-is-more sensibility, clean-cut energy, and crystalline guitar tone. The fiddle tunes such as "Cajun Fiddle" and an obligatory "Orange Blossom Special" are impeccable as well, but have a somewhat more by-the-numbers feel (giving lie to his lack of enthusiasm for the instrument). Rich's voice twangs like his Tele on aw-shucks numbers such as "Round Hole Guitar" and "I'll Be Swinginí Too"; it's no surprise that in Rich Kienzle's excellent liner notes, Rich is quoted as saying that the Beatles' Rubber Soul and jazz axeman Howard Roberts were huge favorites of his. Meanwhile, the Buckaroos reportedly had to be arm-twisted into playing at Carnegie Hall, Owens believing there wouldn't be enough country fans in New York City to make it worthwhile. (Releasing the live album required even more badgering.) Buck's instincts were dead wrong, though; the 1966 show was an unmitigated, sold-out success, and the live release paved the way for more live albums by the band. Sundazed's remastered reissue of the Carnegie album comes complete with the Buckaroos' Hee Haw-style onstage yuks (punctuated by Buck's hollering horse-laugh), with the band doing impressions of country stars like Tex Ritter, Ernest Tubb, and Johnny Cash. There's even a credible cover of "Twist and Shout" that ends with the band taking off their Beatle wigs and Don Rich shooting one wig with a pistol! Mixed with the onstage cut-ups, the Buckaroos pull off flawless versions of their hits (melding several of them into medleys), playing with a raw, jangly edginess that borders on rock & roll and closing with a blistering version of "Truck Drivin' Man." Complete with photos of the band, resplendent in their sequined bolero jackets, this is an excellent snapshot of a country band in their prime having one hell of a time onstage.