O Brother Where Art Thou (Mercury) 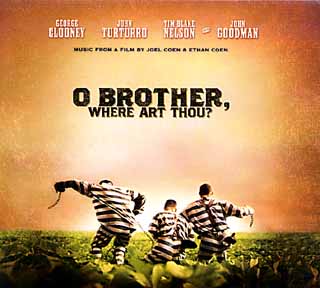 The music to the new Coen Brothers movie O Brother, Where Art Thou? is so integral to the story, the film could almost be called a musical. The soundtrack to O Brother is a collection of "old time" music, though to some ears the collection of folk songs, bluegrass, field hollers, and blues will sound like old-time country. That's because this same musical blend is, for the most part, what country music was before Nashville got ahold of it. Artists from the time frame in which the movie occurs, circa 1937, perform some of the songs, Harry McClintock's hobo classic "Big Rock Candy Mountain," for example. But the collection primarily features contemporary performances produced by T-Bone Burnett that accurately reproduce some of the sounds of that era, when folk music really was by and about "folks." Ralph Stanley, Alison Krauss, Gillian Welch, Norman Blake, the Cox Family, Emmylou Harris, John Hartford, and a bunch more all lend their talents on songs that resonate with a magical charm. A group created just for the soundtrack, the Soggy Bottom Boys, are the real standouts, however. Led by Dan Tyminski, former member of Alison Krauss' Union Station, their versions of "In the Jailhouse Now" and "I Am a Man Of Constant Sorrow" are reverent, yet gleeful, adding a perfect edge to the sound of O Brother. As a whole, Burnett & Co. have crafted a wonderful album. It's a celebration of country music's roots that is eclectic and inviting and one that will resonate for a long time to come.