Jimmie Vaughan skips Dubya's inaugural ball, while the Austin Music Network gets a reprieve from the city as the SIMS Foundation tries to spend $62,000 and fast. 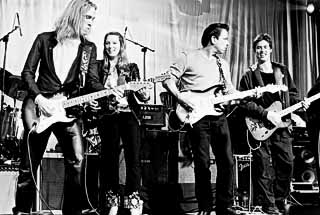 "Almost every horn player in Austin is going to be in Washington D.C. this week -- at least those that play with cover bands," says Richard Fenno, who'll be playing with Dino Lee's crooner act at George W. Bush's Best Little Ball. Where Bill Clinton knew how to handle his Balls and exposed people to jazzy performers like Tony Williams and Herbie Hancock, cover combos like Duck Soup and the Pictures are more typical of the official Dubya Friday night lineup. Former Menudo man Ricky Martin might end up sticking with old classic rock standards as well, if his songwriters have anything to say about it. Martin's producer/ songwriter Robi Draco Rosa has issued a vehement statement against Martin's plans to perform at the inauguration. The Bush team first angered Rosa with its use of his song "The Cup of Life" last fall, and on Friday, Rosa labeled Bush "a president who would have people in his cabinet who would obstruct the exercise of civil rights, human rights, consumer rights, the right to choose, the right to be free of gun violence, and the right to a clean environment," and called Martin's planned appearance "a betrayal of everything that every Puerto Rican should stand for." Among the other musical performers heading to D.C. in the days leading up to the inauguration on Saturday are Destiny's Child, Lyle Lovett, Asleep at the Wheel, Clint Black, Van Morrison, ZZ Top (who were given their own "ZZ Top Day" by Bush in 1997), Andrew Lloyd Webber, and Lee Ann Womack. Meanwhile, Austin's Rick Trevino and Jimmie Vaughan are among those bowing out for various reasons; the latter opted out when the main gala was canceled and the alternate party he was offered conflicted with his current recording schedule. (His rain check involves a private meeting with the president when Dubya gets settled.) Specific lineups for specific nights and events are as hard to track as artists' motives for appearing or not appearing; Fenno says, "We're supposed to be at the airport Friday morning -- the rest is a big question mark." Still, could anything be more appropriate than having Laugh-In producer George Schlatter, the man who introduced Tiny Tim and the Legendary Stardust Cowboy to the world, in charge of the whole thing? Rumor has it that Dubya plans to reprise former president Richard M. Nixon's famous "Sock it to me!" cameo from Laugh-In at the Best Little Ball, but at press time, the president-elect was reportedly having trouble memorizing the script.

The latest version of the Austin Music Network, if nothing else, has inspired confidence among the City Council folks. Councilwoman and longtime music scene supporter Jackie Goodman had her aide Jerry Rusthoven call the Chronicle music department (a first!) to announce that next week's council meeting would include Item 13, in which AMN would be given $225,000 in "life support," while a new plan to solve all the city's audio-visual-related problems gets under way. Basically, here's the situation: AMN is teetering on the brink, barely staying on the air with faulty, outdated equipment; Channel 6 is out of a home due to construction downtown, since the new City Hall was not designed with a room to keep them in mind; and the remaining public access channels (ACAC) have been running without a funding increase for the past five years. Rusthoven says the idea now is to weld together the three problematic organizations, since "it makes no sense to handle them independently when all three need the same sort of resources, not just in money and facilities, but in personnel and training." Rusthoven says not to expect any great solutions at tonight's meeting, as the concept is just getting under discussion, but he adds that in the meantime, expect a much bigger budget adjustment for AMN in order for the local station to do more than just survive.

Going into the holidays, Peyton Wimmer was in a less than joyous mood. As head of the SIMS Foundation, the Austin-based charitable organization dedicated to local musicians' mental health, he was facing an end-of-year bureaucratic crisis. Turns out that last April, SIMS had been allocated a one-time grant of $62,000 via the state's Mental Health Mental Retardation department (MHMR), but that grant came with a condition. According to the terms of the grant, SIMS needed to use the money by December 31 -- which they hadn't. It looked like an extension had been approved, but in late December, two hours before going in for throat surgery, Wimmer found out that it hadn't. "That canceled my Christmas plans!" he laments. Finally, on December 29, the okay came through for a contract extension through February 28. The money, however, can only be used to help treat existing patients (anyone who contacted SIMS before the end of 2000). Though the grant is obviously helpful, Wimmer says SIMS still receives two-thirds of the foundation's income from KGSR-FM, largely through sales of the Broadcasts CDs, though a recent "late Christmas present" check from South by Southwest "couldn't have come at a better time." If you want to do your part in a big way, contact SIMS at PO Box 1622, www.sims-foundation.org, or 512/494-1007. (To inquire about progress toward a Doug Sahm memorial foundation for musicians' physical health, call Wimmer's other office number, 512/ 263-2281.) If you'd like to do your part in a smaller but no less welcome manner, the next SIMS benefit is Saturday at La Zona Rosa with Lisa Tingle & Malford Milligan, Sara Hickman, Ginger Mackenzie, Ginger Leigh, Sissy Ciero, Kelly Smith & Nina Singh, and Floramay Holliday.

March 14-18 is only a short time away, and the final opportunity to register for the SXSW Music Conference and Festival at a discounted price is running out. Those planning on getting a badge (or who get one by having their band play a showcase) will have the chance to hear the wit and wisdom of keynote speaker Kinks founder Ray Davies and confirmed panelists such as: Warner Bros./Reprise VP (and former Austin musician) Bill Bentley; IRS Records/ Ark 21 founder Miles Copeland III; rock critics David Fricke and Dave Marsh; a guy I went to school with, David Menconi; and former Hollywood Records (current Mammoth man) Fastball tosser Rob Seidenberg. Scheduled panels include: Indie Label Strategies; Managers -- Why Can't We Be Friends?; The Art and Commerce of the Blues; Can Digital Music Be Legal and Popular?; The Gram Parsons Legacy; Latin Rock -- Another Alternative; Boy Howdy! -- The Creem Story; Dance Culture Online and On the Floor; and Record Deals Without the Bullshit. And for the rest of you out there, this week's latest additions to SXSW 2001's showcase list include David Byrne, Bobby Rush, Patty Griffin, Wanda Jackson, Billy Joe Shaver, South American Kraftwerk cover band Señor Coconut, Calexico, Brian Jonestown Massacre, and unrepentant vandals ...Trail of Dead.

Take note that this week and next are your last two chances to vote in the Chronicle's Music Poll for 2001 (no Electoral College is involved, we promise!). Now, as you look for the poll on page 2, you may find yourself asking why there aren't forms in the paper for our annual Musicians Register. Answer: Because starting this year, The Austin Chronicle Musicians Register will exist exclusively as an online database of current information on Austin bands and solo musicians. To get in, go to www.auschron .com/musicreg and fill out the form. If you or a friend don't have a computer with access to the Internet, try the Austin Free-Net public access stations, available at all Austin public library branches, the Cedar Park public library, and various locations in East Austin, such as the East Austin Community Network Lab, 2209 Rosewood Avenue, Room 213. Deadline is March 2 to be included in our first "live" Web appearance March 9, and in our print "index" in the March 16 Austin Music Awards issue, but bands will be able to continually update their information and/or post an MP3. And of course, we will continue accepting submissions of new bands from now until eternity.

Wondering why Pushmonkey isn't listed among our precocious musical prodigies for 2001? Well, we're not saying they absolutely won't have an album out this year, but guitarist Will Hoffman tells us the group got off Arista Records in November, and is now between labels. It was an amicable split, he says, noting that the label "was good to us," but that the post-Clive Davis turnover took a while, "and once they got the wheels in motion, what we wanted for our careers and what they wanted for the label didn't match." Currently, Pushmonkey as a band haven't decided whether they'll be making a record on their own and seeing who'd like to release it, or finding a new label to record for. Either way, they say they've got 25 to 30 new songs ready to take into the studio... Since I mentioned that Jimmie Vaughan was in the studio, I should add that Artemis Records plans to release his latest effort sometime this spring. He took a break from recording last Friday night at the Music Hall's sold-out Double Trouble extravaganza, which ended with Charlie Sexton leading Vaughan, Susan Tedeschi, Doyle Bramhall II, Kenny Wayne Shepherd, Jonny Lang, and Denny Freeman though "Bama Lama Bama Lu" ... "Two Moving Parts" is what they're calling the teaming of Billy Joe Shaver and Kinky Friedman for a five-date Texas run and possible future touring. Cleve Hattersley tells me the idea is for the performances (including January 31 at the Broken Spoke and February 3 at San Marcos' Cheatham St. Warehouse) to be "loose like a 'songwriters in the round' thing, but not be a boring piece of shit like a 'songwriters in the round' thing." The mini-tour will be Shaver's first solo flight in 10 years, following the death of son Eddy Shaver on December 31, and Hattersley says to expect Friedman to be "more sensitive than usual." Expect a horde of special guest appearances, including Sammy Allred and the "ill but in recovery" Sweet Mary Hattersley. Rumor has it, by the way, that this year's Bonefit, a former bone of contention between Allred and Friedman, will take place in May with Willie Nelson holding the leash... Schatzi, Silver Scooter, and Subset will all appear in the magazine and on the CD sampler for CMJ in March. The first two have never played together but will do so this Saturday at Red Eyed Fly... Finally, besides the deaths of Cramps co-founder Bryan Gregory, 46, of leukemia and ex-Gaunt frontman Jerry Wick, 33, in a hit-and-run accident, this week's saddest music-related death is that of Michael Cuccione of 2gether. Cuccione, who died of natural causes eight days after his 16th birthday, played Jason "QT" McKnight, the terminally ill member of the band on the boy band's MTV comedy series. This leaves one wondering what TV producer in his right mind would hire an actual dying kid for such a role; could it be that successful MTV programs such as Jackass and the Tom Green Show had the network thinking they could actually disprove the old saying "dead clowns aren't funny"?...