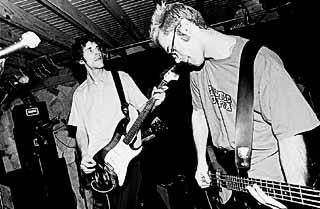 2000 was quite a year for Austin institutions celebrating birthdays, from Sound Exchange to KGSR, and it wouldn't be a stretch to say that Pop Culture Press has finally earned said distinction. Though its focus is national, PCP's evolution over 50 issues from plexidisc-yielding free rag in the corner of Sound Exchange to a high-quality mag in tune with the musically relevant (Radiohead, Arab Strap, North Mississippi Allstars in the latest issue) is quite an achievement. Just ask Chopqper. The charismatic leader of Kissinger (band, not politico) and master of ceremonies kept the focus of Sunday's evening shindig squarely on the celebration at hand, from ebullient band introductions clear down to ad-lib couplets singing the praises of PCP and its chocolate-on-chocolate birthday cake at the back of the room. Opening the proceedings as dusk turned to black were locals the Swells, serenading the rapidly filling Fly with a rainy-day atmosphere straight out of the U.K. circa 1990. Pleasantly entrancing as a starry night on a hilltop, the effects wouldn't have been complete without the solid grasp of popcraft peeking through the misty veil that kept all faces bright, and on frontman David Malerba's crowning nugget "Without a Trace," heads a-bobbing. Nor did they stop bobbing for Coco Candissi, as the fourpiece swam even further ashore, riding squarely in on the crest of the rushing New Wave. Tempo shifting from Gary Numan to Missing Persons to Prima Donnas and beyond, sometimes in the course of a song, lack of strong hooks didn't keep Coco from infecting the crowd with a power-chord-take on retro-rock. With boys on one side and girls on the other, Candissi's punk vigor melded smoothly with a certain Judys-like middle-school levity. As club denizens milled about, some eyeballing the Radiohead-adorned golden PCP issue, some partaking in the double-choco indulgence, Chopqper finally set up Kissinger's own shop. Possessed of a certain Ric Ocasek vocal presence, the frontman led the local buzz kings through a solid set of fun-fraught treatises on such subjects as possums, cats, and Chopqper's niece, with between-song play-by-play as an added bonus. Strategic placement of muted strings and harmonies, and a slightly choreographed trio of axe-wielders only added to the roller-rink-birthday feel, where the only hair styling going on was the singer's continuous efforts to mess it up. So maybe it isn't Radiohead's vision of the future, but who wants all that gloomy stuff at a birthday party anyway?