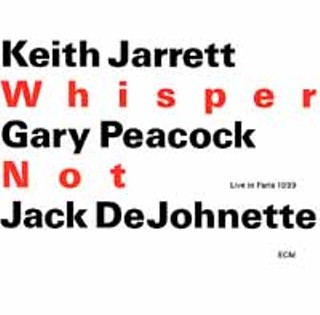 Thanks to chronic fatigue syndrome, Whisper Not is the first new recording by pianist Keith Jarrett in a couple of years. Coupled with bassist Gary Peacock and drummer Jack DeJohnette, Jarrett's all-star trio recordings for ECM starting in 1983 have set a standard for modern jazz pianists. On this 2-CD set of live recordings from Paris, pop standards such as "What Is This Thing Called Love," and "When I Fall in Love," are mixed with well-known jazz standards like "Hallucinations," "'Round Midnight," and the title track. Jarrett claims that while he was ill, he placed a great deal of emphasis on playing melodies. He certainly emphasizes playing songlike lines here, although his chops have returned to him, and does it well. There are times when his singing phrases and lovely touch recall Hank Jones, but Jones isn't the only older pianist he's reminiscent of; during "Sandu," Jarrett punctuates twice per bar with his left hand like Red Garland did. It's hard to argue with the near perfection that Jarrett, Peacock, and DeJohnette display here, especially in view of the fact that Jarrett's just had a serious illness and can be expected to come back slowly. Still, one has to ask if his days as a progressive musician are over, especially in view of the fact that he'd been recording so many standards prior to getting sick. He's still creating, but even his lovely arrangement of "Bouncing With Bud," which casts it in an entirely new light, seems like a retrogressive development. Jarrett's pushed a lot of boundaries during his long career; he's a great musician and has nothing to apologize for. A lot of superb jazzmen stopped evolving long before they reached his current age of 55. It'll be interesting, then, to see which direction his career moves in now.