The Lovemongers The Last Noel (B2) 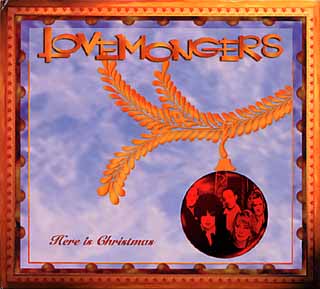 The rule for making worthwhile Christmas music is simple: Sing something different, write something new, play something better, and do anything to avoid yet another by-the-book version of "The Christmas Song" or "Rockin' Around the Christmas Tree." The Lovemongers (Heart's Ann and Nancy Wilson) play by all the rules, and with 10 tracks, Here Is Christmas delivers delightfully. Traditional offerings are made in the form of the ancient carol "Balulalow," an a cappella "O Holy Night," and an exquisite "Ave Maria," Schubert's classic framing Ann Wilson's crystalline vocals perfectly. Nancy Wilson, who was rather busy this year doing soundtrack music for husband Cameron Crowe's Almost Famous, presents "Bring a Torch" as a lovely guitar instrumental. The six original songs are not necessarily new; "Here Is Christmas" dates from 1989, "How Beautiful" 1993, and "William and Rose" 1998. Unique to the Lovemongers is how much of a group entity they seem to be, not just musical backing for the Wilson sisters. Bassist Frank Cox sings his own "The Last Noel," not with the most distinctive of voices, but with a sweetness that imparts as much meaning to the song. Keyboardist Sue Ennis operates as a de facto third Wilson sister, providing accompaniment, harmony, and songwriting to the mix. One quibble: "O Holy Night" should have been the closer, because when Ann Wilson cranks up at the end, the line "oh night divine" resonates with the spirit of the season, ringing like a bell long after the CD ends. "Here is Christmas shining in our eyes," sings the title track. Shine it does.