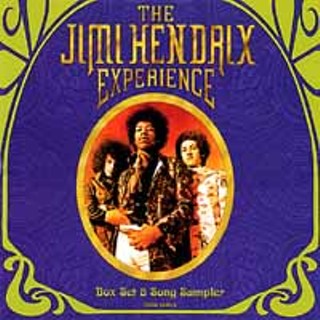 With his producer Eddie Kramer having said there's enough unreleased Jimi Hendrix material in the vaults to put out one new album a year for the next 10-15 years -- some 1,500 uncatalogued tapes -- the 4-CD, purple-velvet-wrapped Jimi Hendrix Experience box set is just the tip of the iceberg. Actually, that would be the three studio albums Hendrix released during his lifetime, Are You Experienced, Axis: Bold as Love, and his masterpiece, Electric Ladyland. Thirty years after his death by overdose in 1970 at the age of 27, the psychedelic father of all electric guitarists has had his catalogue reissued at least three times; been anthologized via Smash Hits, Best of, Essential, Ultimate, and the 4-CD Lifelines; and had enough live material issued (Radio One, Live at Winterland, Live at Woodstock, BBC Sessions, and the 4-CD Stages) to support a career, well, 30-plus posthumous years. The Jimi Hendrix Experience is good for at least a couple more. Aimed at collectors and completists, the latest accord between Kramer, the Hendrix Estate, and MCA is a gold mine. Or rather Goldmine. Of the set's 56 tracks, only 10 have been previously released, and while there's at least one discful of barrel-scraping, the majority of The Jimi Hendrix Experience blinds with a sound as radiant as the God-given talents of the Seattle-born guitar player. Disc one opens with a demo of "Purple Haze," which although clearly rationalizing its existence as unfinished, features some of Hendrix's unmistakable genius. In fact, the entirety of this box set is like that: For every instance of vault abuse is a piece or guitarism or a solo that makes your teeth ache. "Title #3," an instrumental rave-up, will have you putting a call in to your dentist, as will a couple of tracks from Hendrix's breakthrough, the Monterey Pop festival, even if early versions or "Third Stone From the Sun" and "Burning the Midnight Lamp" are vaguely root-canalish. Disc two's initial stab at "Little Wing" is somewhat leaden, "Little Miss Lover" not much better, but take 21 of "Bold as Love" explodes in a rainbow's psychedelic haze. Aborted versions of "Electric Ladyland" and "Roomful of Mirrors," a stoned rehearsal of "Gloria," and a rather cheesy studio version of "Star-Spangled Banner" relegate the second CD as the weakest of the lot, but disc three makes up for it with mostly live material. "Voodoo Child," originally released on 1972's long-gone In the West, is protean. The last disc compiles the heavily blues-based material from Hendrix's last three band incarnations, and showcases live highlights like "Johnny B. Goode" and "Blue Suede Shoes," dazzling guitar workouts on "Cherokee Mist" and "Hey Baby/In From the Storm," and the final 1:36 of "Slow Blues," Hendrix's last multitrack recording. So, is The Jimi Hendrix Experience for you? Depends. How much of all that other stuff do you already own?