Brain in a Box: The Science Fiction Collection (Rhino)

Brain in a Box: The Science Fiction Collection (Rhino) 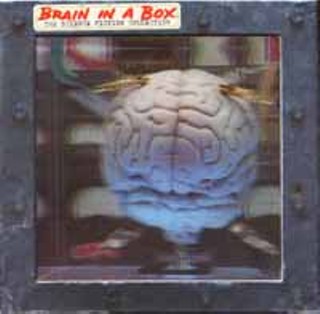 Brain in a Box: The Science Fiction Collection

What is the Brain in a Box? Well, on the outside it appears to be exactly that -- an aquarium-like metal and cardboard box containing a more-or-less life-sized human brain. (Psst! It's actually a hologram!) Inside is a 5-CD collection, each disc dedicated to movie themes, TV themes, pop tunes, incidental/lounge music, and novelty ditties respectively, all relating to a science fiction theme and accompanied by a small hardback book packed with musings on the subject from a number of authors and nifty photos of movie posters, toy ray guns, and the like. The Brain in the Book tells us that the whole shebang was the brainchild (if you will) of some guys who were driving around outside Austin one night looking at the stars, and some of the selections included reflect that, like Roky Erickson's "Creature With the Atom Brain" and Kathy McCarty's version of Daniel Johnston's "Rocket Ship." Beyond that, it's a grab bag, based on what the humans involved could attain the licensing rights to (they mourn George Lucas' piggish refusal to let them use the Star Wars theme), but for the most part, they show good taste and variety. It wasn't necessary to include two tracks by the inimitable Leonard Nimoy ("Music to Watch Space Girls By" on the novelty disc, and "Alien" on incidental/lounge), but what the heck? And the placement of some of the tunes seems arbitrary (I would've switched the two Nimoy tracks, myself), but where else are you going to find a collection that boasts the theme from The Day the Earth Stood Still, the B-52's ("Planet Claire"), Dr. Samuel Hoffman ("Theremin Solo"), the theme from The Andromeda Strain, the Dickies ("Gigantor"), "Science Fiction/Double Feature" (from The Rocky Horror Picture Show), Les Baxter ("Saturday Night on Saturn"), Parliament ("Unfunky UFO"), the theme from "Astro Boy," Ella Fitzgerald ("Two Little Men in a Flying Saucer"), Mojo Nixon and the World Famous Blue Jays ("UFO's, Big Rigs and BBQ"), the theme from "Dr. Who", and Nilsson ("Spaceman")? You could argue all night about what's not here -- how about Devo's "Space Junk" or, even more thematically, their "S.I.B. (Swelling, Itching Brain)" -- but in the long run, it's best just to throw the contents of this box into the car CD player, preferably with all five discs on "random," and drive around outside Austin looking at the stars. Who knows what inspirations will come to you?