The Peek-a-Boo Book of Spells (Peek-a-Boo)

The Peek-a-Boo Book of Spells (Peek-a-Boo) 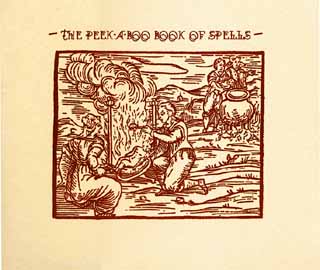 The Peek-a-Boo Book of Spells

Sixteen songs about witches and spells? Three weeks after Halloween? This has to be some kind of joke, right? Well the joke's on the doubting Thomas. This limited-edition clear-vinyl goody may be a couple of weeks late, but it's nevertheless a spot-on cauldron of bubbly bat-wing stew, dry ice, and sugary wax fangs -- and a damn good pop song or 16. From the first note of Port Vale's oddly catchy Colin Quinn-meets-Robert Smith opener to the last synth bell of the Prima Donnas' play-it-straight love confection "Sugar Plum Fairy," Book of Spells is like one of those marathon post-trick-or-treat sessions where each scoop yields a new flavor. Many of the bands are frighteningly well-equipped for this brand of spooky fun, from Roar! Lion's claustrophobic, electro-charged "Witch Hunt" to the Kiss Offs' "Red Underwear/Seductra," an icy darkwave equivalent to Meat Loaf's "Paradise by the Dashboard Light." The spook equation barely factors into solid cuts by Silver Scooter and Knife in the Water, but the challenge of the concept pushes many of the bands (most of them local) into new, interesting directions. Super XX Man ventures earnestly into the world of dryads and cupids with the intoxicating "Cast a Spell," while Fivehead takes a subtle detour into early New Order territory with the tightly knit "Sit a Spell," and Subset delivers their edgiest song yet, the deep-in-the-Maryland-woods-menacing "Twelve-Sided Die." It's the Trail of Dead cut, though, that will turn the most heads. These amps-to-11 chaosmongers make do without distortion this time, delivering "Witch's Web," a soft, angelic tune of regret and validation, punctuated by Conrad Keely's reverberating falsetto.